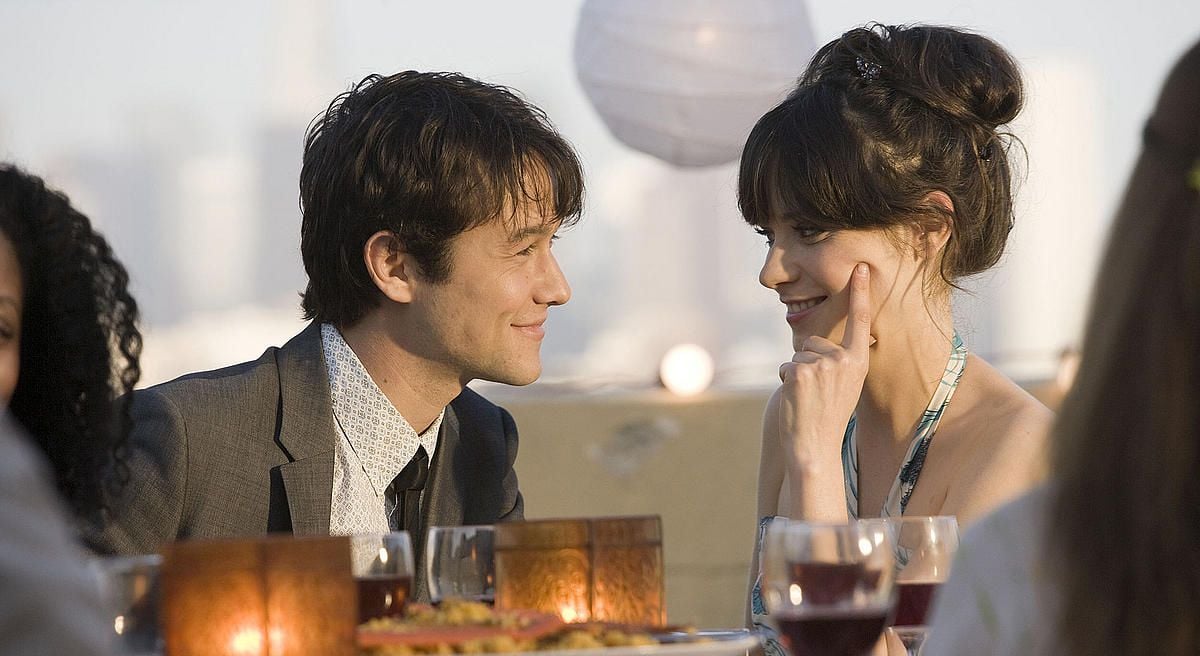 Just sincere enough not to seem target-marketed, (500) Days of Summer is a charmer of both semi-classic and partially derivative proportions. In a sweetly sanitized Los Angeles, we find Tom (Joseph Gordon-Levitt), a trained architect who, for some reason, left his aspirations behind to become a writer of bad greeting cards. One shining day in the office appears Summer (Zooey Deschanel), the boss’s new assistant and the muse who, simply by existing, has unwittingly inspired bands, the sale of ice cream, and an increase in traffic on her morning commute. Tom, like a 27-year-old teenager, likes her something awful; she, as Nathan Rabin’s “manic pixie dream girl” requires, might just save him from himself. She also, like Rabin’s MPDG, has little interior life of which to speak, and of course, Tom holds on too tightly. Though she says she doesn’t want a boyfriend and he lets the relationship go forward without category, they’re clearly lovers and, though fleeting and often one-sided, there are some sparks.

While almost anyone can relate to the story of passions ignited and then squelched, not everyone will love the ‘60s-sitcom aesthetic or director Marc Webb’s extensive film references (Bergman and Fellini are lovingly and repeatedly aped). And while rehashing the aesthetic of New Wave directors is no longer original, it’s perhaps still relevant to the film’s cause: While not particularly ironic, this romantic comedy plays like a non-romantic dramedy, selling nostalgia just as fervently as it doesn’t sell love. (Hipster cred also plays into the plan: The soundtrack has “Rushmore Sales Potential” written all over it.) With the scattershot quality that marks many fledgling relationships, the film skitters between being so flagrant it’s awkward and being so sweet it wins you over. In short, like the object of desire Tom consistently deconstructs, we’re left tearing apart (500) too, because the film is similarly loveable and problematic, and it’s always those things we care about we feel free to deride.

If (500) weren’t playing the indie card so diligently, one would think the film was aiming to become the new Breakfast at Tiffany’s, with Deschanel as the new Hepburn. Summer’s reiteration that she’s not to be owned, along with her “Moon River”-like leitmotif, bring the parallel to the brink of obviousness. Problem is, both the film and its central relationship suffer from a lack of identity. This is particularly foregrounded by the film’s halfhearted “moment of truth” in which Tom has a cathartic meltdown and proclaims himself guilty for buying into the fairy tale sold by greeting cards (which he writes), pop music (which he listens to incessantly), movies (to which he takes Summer), and books (which he carries around like a character from a New Pornographers song).

And while Tom blames himself for the cultural misdirection and post-collegiate confusion suffered by the not-so-world-weary twentysomethings (a set to which he clearly belongs), he also actively creates the problem he bemoans. Don’t get me wrong: If it weren’t all so pleasant to watch, I’d find it far less sincere, but if it weren’t so sweet I’d also have far less to complain about. Really, what’s more predictable and derivative than love? Except maybe our annoyingly incessant search for it.

Understanding Screenwriting #28: The Hangover, The Brothers Bloom, The Taking of Pelham 1 2 3, & More