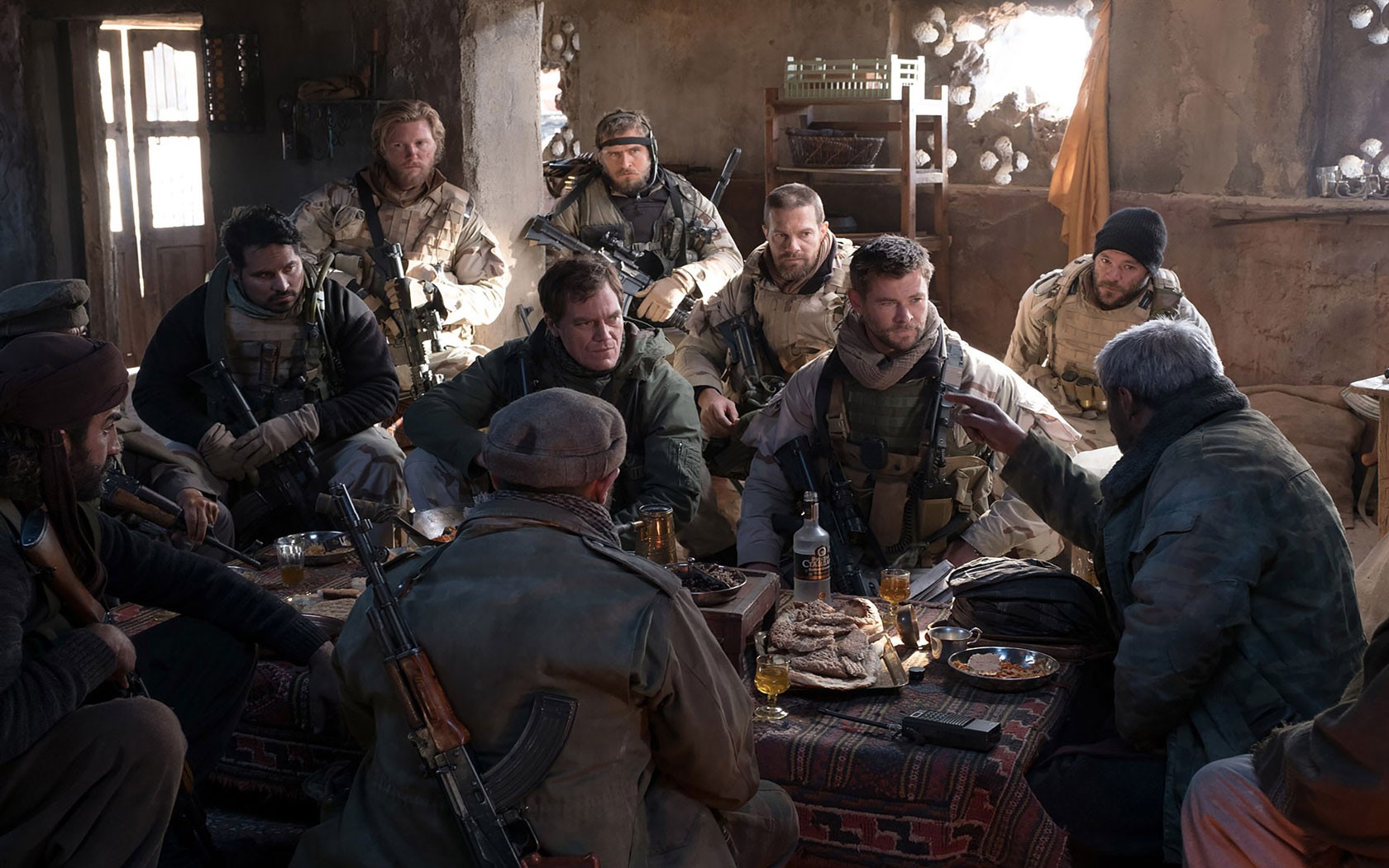 In late 2001, the United States launched its military operations in Afghanistan with a covert mission to seize the key northern city of Mazar-i-Sharif. Flash forward 16 years and that event now serves as the basis for the starry-eyed 12 Strong. Meanwhile, America is still fighting the same damn war. But you’d hardly know that from watching this rah-rah recruitment film for the U.S. Army, which endeavors to look away from all the horrors associated from the American occupation of Afghanistan in order to return us to those halcyon days just after 9/11, when everything seemed so simple: The U.S. was good, al-Qaeda was bad, and the invasion of an impoverished country most Americans couldn’t even locate on a map was a purely just and righteous act.

And so, 12 Strong begins with a montage of terror attacks set to gloomy drone music, which attempts to soothe the audience’s potential pangs of conscience by reminding us that Osama bin-Laden started this thing. We then meet Mitch Nelson (Chris Hemsworth), a rugged, all-American Special Forces captain on leave from the military, moving into a new house with his wife (Elsa Pataky) and daughter (Marie Wagenman). After he witnesses the 9/11 attacks on TV, Mitch storms over to the local Army base and demands to be reinstated with his Green Berets unit, known as ODA 595. And soon enough, after a bit of bureaucratic tussling, the 12-man team is parachuting into Afghanistan, where they will lead local Northern Alliance forces to seize Mazar-i-Sharif from the Taliban, which would become the U.S.’s first major victory of the war.

Brawny, model-hot beefcakes with bleached teeth, ODA 595’s soldiers are depicted as amiable tough guys with a keen sense of gallows humor and just enough moral scruples to lend them a sense of humanity—but not so much that they ever become moralizing killjoys. Their backstories are largely a mystery, save for some perfunctory prefatory scenes showing some of them with their families. Director Nicolai Fuglsig contrasts their genial good nature with the vicious, self-serious savagery of their enemies, who are shown—in one of the few scenes not presented from the U.S. military’s immediate vantage point—executing a little girl in the middle of a town square for the crime of being educated. This gruesome atrocity is cynically used to goose the audience’s moral outrage as well as to provide an additional rationale for the U.S.’s mission: Now it’s not just about revenge, but also liberation.

It’s worth noting that in a film chock-full of death, the murder of this one girl is the only truly memorable moment of violence. Depicted in tight close-ups, with a grisly fascination that borders on pornographic, the scene deviates sharply from the rote, video-game-like violence of the film’s battle sequences, in which masses of faceless Taliban fighters drop to the ground like flies as tiny traces of CGI blood spurts into the air before quickly vanishing. Fuglsig particularly revels in the destruction caused by bombing raids, which he often captures in sweeping aerial shots that give us a bird’s-eye view of the awesome might of the American empire. That the men who die in these battles might not be purely “evil,” that they too might have families, friends, and lovers, is a nuance that 12 Strong doesn’t care to discern. The enemy here is just that, existing merely as foils for our American heroes.

As Fuglsig doesn’t allow any complicated thoughts about war, colonization, and mortality to hover around his characters, 12 Strong inevitably proceeds as a jaunty imperial adventure through the wilds of northern Afghanistan as Mitch and his men sleep in caves, ride horses through mountains, mock locals (before bonding with them, of course), and, in the film’s money shot, charge their steads into glorious battle like latter-day Lawrences of Arabia. Only Northern Alliance General Abdul Rashid Dostum (Navid Negahban) touches on some of the gloomier aspects of our military’s designs on his country, making the obligatory observation that this land has long been “the graveyard of empires.” But Fuglsig isn’t interested in probing such matters. For 12 Strong, Afghanistan isn’t so much the graveyard of the U.S. empire as its playground.