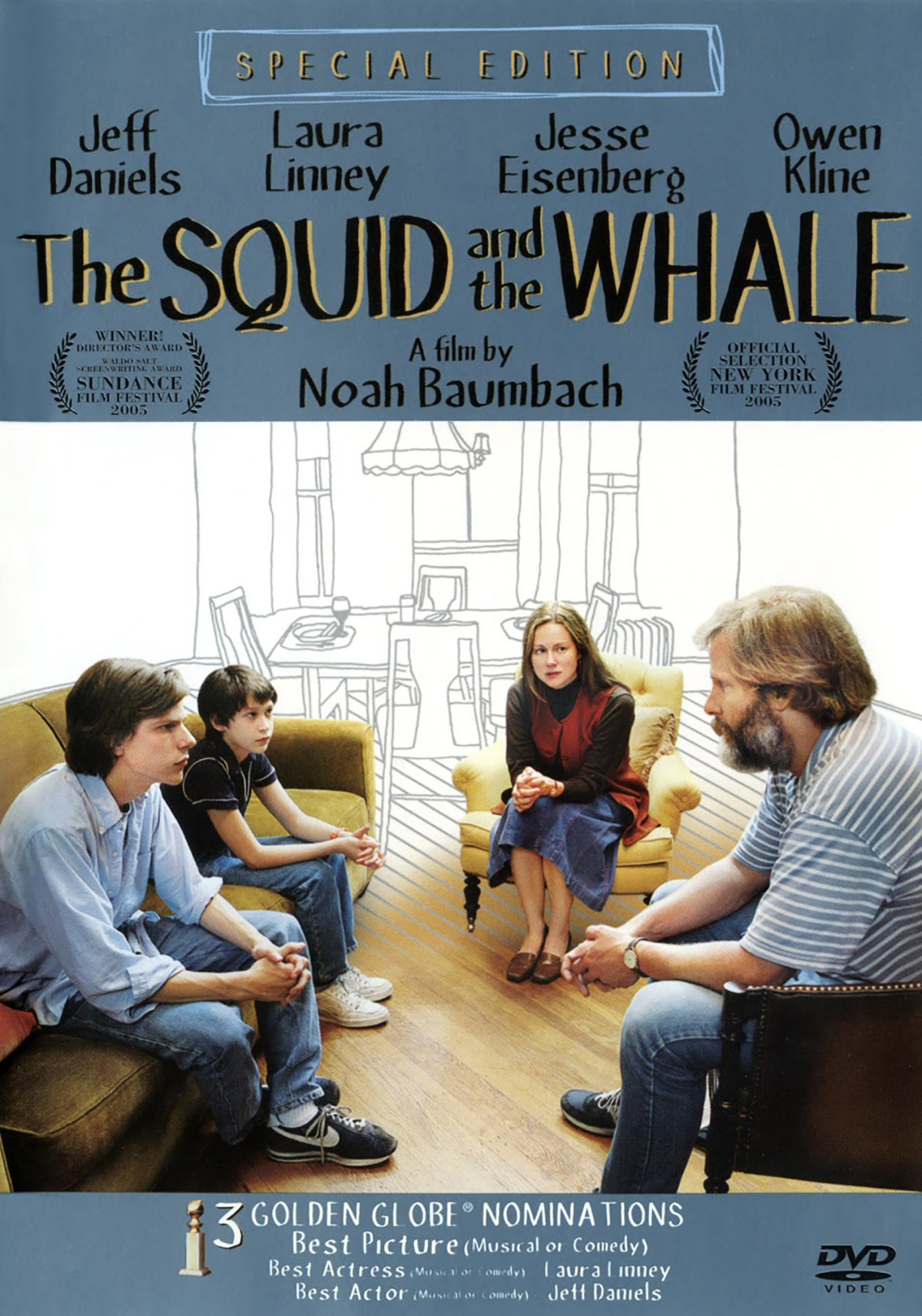 When Walt (Jesse Eisenberg), The Squid and the Whale’s angry and confused son of divorcing parents, passes off Pink Floyd’s “Hey You” as an original composition at a talent show, it’s not simply a symbol of the teen’s all-consuming denial but also—as the song’s repeated lyrics elucidate—a desperate and compassionate cry for help. All four protagonists in Noah Baumbach’s painfully sincere and delightfully silly film are, in some form or another, similarly wounded, fractured, and lost, clumsily and miserably attempting to navigate the internal, interpersonal, and logistical schisms created by marital dissolution.

Set in 1986, the writer-director’s semi-autobiographical third feature charts the fallout from the disintegration of the Berkman clan, a state of affairs propelled by years of unrelenting disappointment and long-suppressed resentment. Fought with both straightforward and passive-aggressive tactics, the once-nuclear family’s contentious split quickly devolves into a nasty tag-team scrum in which sides are drawn among haughtily erudite novelist and professor Bernard (Jeff Daniels) and loyal 16-year-old son Walt in one corner, and his aspiring writer and adulteress wife Joan (Laura Linney) and troubled, masturbation-crazy 12-year-old son Frank (Owen Kline) in the other.

Though its tale of parentally inept NYC intellectuals is akin to a more streamlined, compact, and intimate variation of The Royal Tenenbaums, Baumbach’s film substitutes Wes Anderson’s ironic preciousness for a more blunt confrontation of its characters’ mixed-up, distraught emotions. Attuned to the texture and sounds of its bourgeois Park Slope, Brooklyn locale, The Squid and the Whale painstakingly stages the minor squabbles and major quarrels that accompany divorce, from parents’ dueling power plays concerning custody issues, to the bitterness born from sneaky, selfish, uncompromising disputes over ownership of jointly accumulated material goods, to the more corrosive act of one insecure elder recruiting the children to surreptitiously spy on (and report back about) the other. The devolution from cohesion to fractured divisiveness is Baumbach’s primary focus, in terms of both the legal ramifications of Bernard and Joan’s split (which party gets the brownstone, the cat, etc.) and, more fundamentally, with regards to Walt and Frank’s struggles to carve out individual identities influenced by (but nonetheless unique from) their parents’ domineering personas.

Yet even more so, this overriding theme is captured in the realistic tale’s use of a storybook-esque title (based on a diorama at Manhattan’s Museum of Natural History that profoundly affected Walt as a child), highlighting the disconnect between fantasy and reality that speaks to divorce’s agonizing confirmation that one’s previously cherished hopes and dreams about the future are not always perfectly realized. As Baumbach’s wry, elegant script about maturation makes clear, what one wants isn’t always what one gets; who one aspires to be (especially in the case of Walt, who unwisely takes to heart his father’s academic and romantic pronouncements) is not always who one truly is. And only in his decision to adorn scenes’ backgrounds with obvious signifying novels (Bernard reading Saul Bellow’s The Victim) and movie posters (Walt’s one-sheet for The Mother and the Whore) does Baumbach’s general directorial tact and understatement falter, a somewhat surprising shortcoming considering his delicate employment of lyrical pop song accompaniment to underscore the tumultuous action.

Fortunately, such minor distractions in no way interfere with the nuanced performances from his superlative cast. As supercilious literary has-been (and sexual horndog) Bernard, Daniels exudes an imposing blend of lofty sophistication and insecurity-bred condescension, turning his daunting paterfamilias—eager to manipulate Walt as a means of retaining his kid’s loyalty while also buttressing his own damaged ego—into a figure worthy of scorn and pity. An acrimonious Eisenberg and downcast Linney are equally notable, but finally, it’s Kline (the offspring of Kevin Kline and Phoebe Cates) who steals every scene he’s in as the psychologically distressed Frank. Effortlessly alternating between raw, unguarded honesty (telling his beloved mom out of left field, “You’re ugly”), sexual/romantic confusion (an ailment also afflicting his older sibling), and profane bad sportsmanship learned from his piss-poor paternal role model, the actor’s portrayal both humorously and heartbreakingly epitomizes the damage wrought by divorce on impressionable youth. Despite their failings, however, The Squid and the Whale dares not harshly judge its all-to-human characters, unswervingly assuming a sympathetic stance toward these flawed family members that’s nicely summed up by Bernard’s frank assessment that, “People can be very stupid.”

The image is very grainy, but it suits the movie’s hipster mystique rather well. Not a single smudge, scratch, or instance of edge enhancement in sight. Audio is possibly more impressive. The surround work is okay, but the dialogue is positively booming.

Noah Baumbach can be a little prissy, but you can’t fault the guy for not wanting to record a typical commentary track. Rather than force himself to talk over the film, he shares his opinions (for just under 52 minutes) on various themes related to the film while stills flash across the screen. Also included here is interview footage with Mr. Jennifer Jason Leigh and writer Phillip Lopate from the film’s New York Film Festival screening (it was Lopate, if I remember correctly, who also interviewed the director after the film festival’s press screening, during which he got some better answers out of the man), an intimate 10-minute behind-the-scenes featurette featuring cast and crew (including producer Wes Anderson), and a collectible booklet which features reviews by boring critics Baumbach’s mother Georgia Brown probably doesn’t like.

On Tuesday, when hipsters all over Brooklyn are buying copies of The Squid and the Whale, do you think Armond White will leave his house?