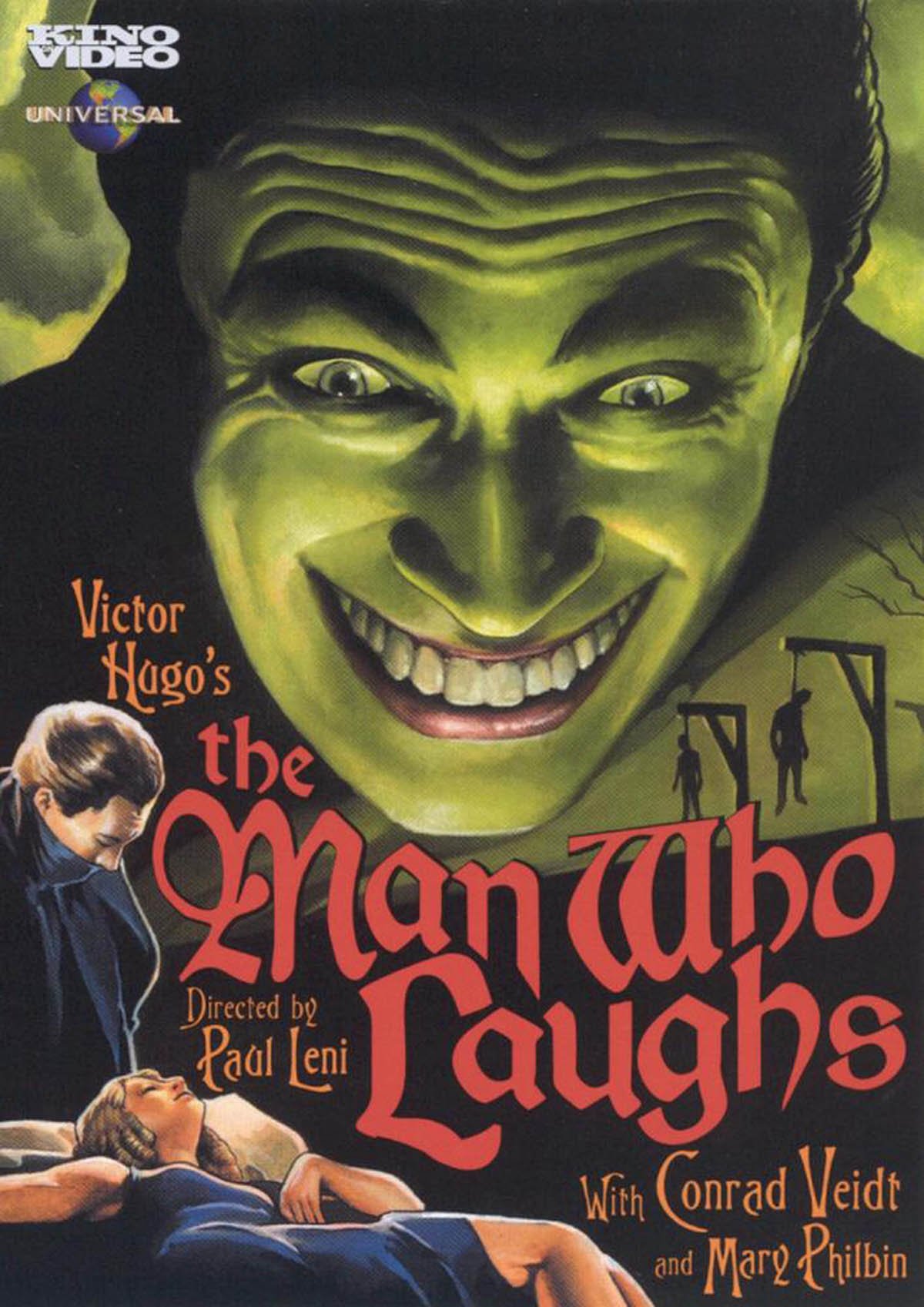 Early on in Paul Leni’s The Man Who Laughs, the surgically perma-grinning Gwynplaine looks at himself in his dressing-room mirror. A one-time son of English royalty who as a boy was turned into a freak-show attraction by political enemies, Gwynplaine spends his time as a traveling performer whose wide crescent smile sends the great unwashed into tizzies of both horror and, eventually, delight. As he looks at himself in the mirror, he’s struck with the hollow ghastliness of his life, and his face sags into a visage of misery, with the exception of his perpetual grin. A moment of bravura acting by Conrad Veidt (already famous for his portrayal of Cesare in The Cabinet of Dr. Caligari), it’s topped by a wonderful cinematic grace note when Gwynplaine closes the doors of the mirror and finds them ironically painted with the Greek masks of comedy and tragedy.

Whether it was because Lon Chaney had recently signed a contract at MGM and was unavailable for work at Universal, or because one of the studio’s founders, filmmaker Carl Laemmle, had a great eye for German expressionism, The Man Who Laughs took the Universal “super jewel” series of gothic horror to new and unparalleled heights in cinematic intelligence. Like many a German expressionist nightmare, the film, based on a novel by Victor Hugo, is a collision of non-complementary angles and framing that confuses as often as it elucidates. At the same time—and unlike The Cabinet of Dr. Caligari or Leni’s own 1924 silent Waxworks—it it’s also remarkably clean in its delineation of action.

In the same manner that Veidt is both the film’s central monster as well as its main source of pathos (all but laying out the blueprint for James Whale’s Frankenstein), the film’s fascination with bric-a-brac and its tendency toward spare, minimalist compositions is evidence of a stylistic schism. This obsessive dualism that runs throughout the film also informs the love triangle between Gwynplaine, his blind co-star girlfriend, Dea (Mary Philbin), and the Duchess (Ogla Baclanova). It’s a little off-putting—and probably also a function of Laemmle’s insistence that The Man Who Laughs rival Phantom of the Opera’s phenomenal box-office success—that all superfluous characters basically adhere faithfully to one of two sides of the classic good-evil dichotomy, but even that framework could be taken as a critique on Leni’s part of Hollywood’s psychologically limiting archetypes. Veidt’s terrifying grin masks the horror of having one’s looks be objectified at the expense of their humanity.

Kino on Video and Universal worked with the Cineteca del Comune di Bololgna to restore this 75-year-old film to its former glory (as a Super Jewel production, The Man Who Laughs was budgeted at a then-astronomical million clams, so that’s a lot of glory to restore). The results were worth the effort. Though it’s fairly obvious that a few shots were time-stretched to presumably make up for un-restorable footage (some intertitles are taken as still shots as well), and a few process shots show the degeneration, for the most part this is a remarkable-looking transfer. Of course, there’s a whole boatload of film grain, and evidence of artificial sharpening, but don’t expect a film this old to look any better than this. The film’s original mono Movietone score (with a few sound effects that are an artifact from the transitional neo-sound period) has also been restored by Universal, and though it’s tinny and limited, it’s also about as good as can be expected.

Probably the centerpiece of the special features is a three-minute rare piece of home-movie footage of Conrad Veidt and other new arrivals in Hollywood (Garbo and Jannings, among others), provided by film archivist Harold Casselton. Not only is it quite a find, but it also indirectly comments on the rather isolated minoritarian community Hollywood émigrés formed. Also included are a mostly by-the-book 15-minute “making of” featurette, a gallery of stills and promotional artwork, an excerpt of Victor Hugo’s novel (judging by the evidence on display, the critical claims that it’s one of the author’s lesser works hold true), an almost nudie excerpt from the Italian release version, and a restoration demonstration. A nice selection of materials not so much for their quantity, but for their uniqueness.

Batman and the Joker only wished for this kind of psychological complexity.