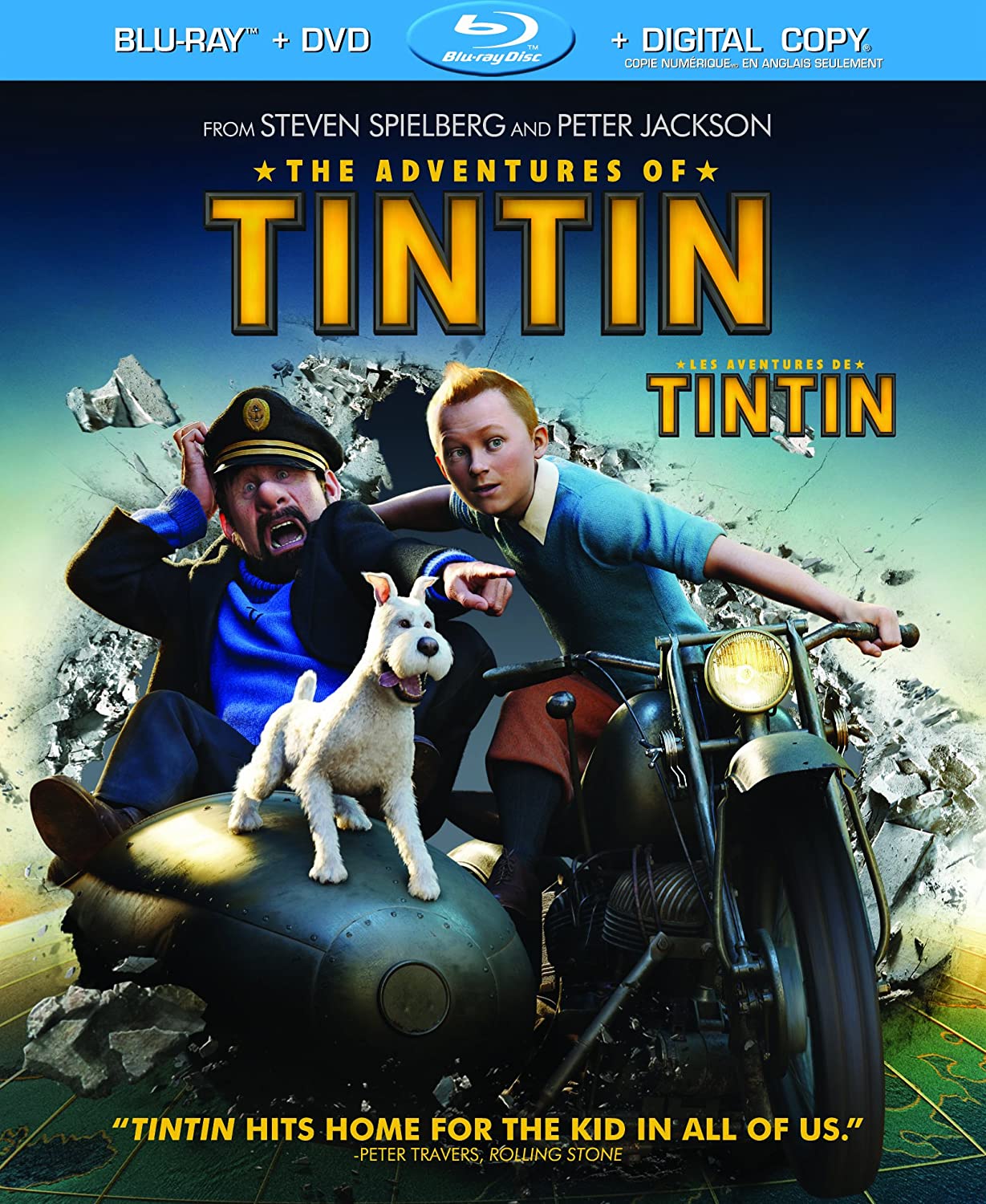 Steven Spielberg’s Indiana Jones and the Kingdom of the Crystal Skull was going to make money no matter what. But in the public eye, irrevocable damage had been done to one of popular cinema’s towering figures, by his creators no less. And so the master withdrew into a multitude of projects, mostly as a producer, but eventually he revved up pre-production on two improbable big-screen adaptations, that of Michael Morpurgo’s WWI novel War Horse (which had already birthed Nick Stafford’s exuberantly received, puppet-employing stage adaptation) and Hergé’s beloved The Adventures of Tintin series.

War Horse, for all its lush countryside cinematography and written-on-the-forehead John Ford influences, is what could charitably be described as a slog, shamelessly retreading Spielberg’s inexcusably simple view of war and his bloated sentimentalism. In fact, War Horse brings the filmmaker’s very worst tendencies to bear, whereas The Adventures of Tintin, a groundbreaking performance-capture endeavor co-captained by producer and Weta Digital supervisor Peter Jackson, indulges in a variety of imitations of his most admirable talents. And whatever else might be said about the film, it’s by no means anything resembling a slog.

Aptly put, The Adventures of Tintin is a perpetual motion machine, breathlessly engineered and realized in a fit of unfiltered adventurousness, both narratively and technically. The quasi-cow-licked do of its titular protagonist, a prodigious journalist voiced by Jamie Bell, appears initially in a moment of nostalgic self-reflexivity: a street-art portrait artist captures the new digitally rendered Tintin in the peppy dot-eyed visage originated by Hergé. It rightly speaks directly to the beguiling irony of the film: an action-packed, eye-popping wonder ride through scenes of swashbuckling pirates, motorcycle chases in Morocco, and a balls-out shipyard crane battle, all in the service of our hero being able to recuperate three clues written on scraps of parchment and write an article for a print publication. These slips of paper play the role of ignorable Maguffin, illuminating Spielberg’s love for the analog, even as he pushes further into the ever-shifting digital landscape.

Benefiting from and beleaguered by Andy Serkis’s boozehound Captain Haddock, endlessly chased and threatened by Daniel Craig’s nefarious Sakharine, and attached at the hip to his pet wire fox terrier, Snowy, Tintin is something of a penultimate adventurer, but unlike his most obvious forbearer, Indiana Jones, his intellect is dwarfed almost entirely by his inexplicable powers of deduction. Despite guns, violence, and at least one death with honest-to-God blood, The Adventures of Tintin is still essentially an animated kids film, and the one-dimensional hero of the title, as written by Steven Moffat, Edgar Wright, and Attack the Block helmer Joe Cornish, lends little nuance to bely that classification, as much as his actions and environs suggest a superior understanding of adventure films.

Tintin remains Hergé’s unrelenting seeker of truth through historical mystery, but he also becomes Spielberg’s proxy here, finding no way of satiating his exhaustingly repetitive interest in foreign lands, bottomless histories, and scarred souls. As such, the character also takes on Spielberg’s universally palatable sensibilities. Whiskey is the root of almost all the problems in the film; evil men seek money and vengeance while good men seek adventure and wisdom; the fluffy dog is capable of outsmarting most henchmen; and there’s no such thing as sex. Had Haddock been the lead protagonist, the character might have proven a worthy hero of complex lineage, but, as he’s ostensibly second-fiddle to the terminally sober Tintin, the character never gets too far outside his shell.

The Adventures of Tintin works as spectacular vaudeville and is certainly a more remarkable entertainment than Kingdom of the Crystal Skull and, for that matter, War Horse. The trouble is that, unlike Spielberg’s best works, there’s little in the way of narrative surprises, as much as the performance-capture work consistently astonishes. It’s a problem not totally unlike those found in Rango, another Nickelodeon Movies production, and it confirms that Nickelodeon is growing incrementally bolder but is still getting lapped several times over by Pixar. Even in largely disposable productions like Cars 2, there’s an unmistakable sense of Pixar’s camp of directors looking forward, imagining, inventing, and reinventing with breathless ambition, whereas Spielberg, even when gifted with groundbreaking technologies, can’t help but look forever backward, beholden to history and gripped by fond nostalgia.

Paramount’s stunning 1080p/AVC-encoded transfer is, despite my reservations concerning the film itself, a blowout, show-off sort of audio-visual experience. The varied, delectable colors of the brilliant production design shine here, from Tintin’s bright-blue sweater to Red Rackham’s crimson pirate costume to the trail of orange flame that sinks the Unicorn. The transfer is also devoutly beholden to the detail and textures of Steven Spielberg’s world: The list begins but doesn’t end with Snowy’s coat of pure-white hair, the translucent turquoise of the ocean, the brick, sand, and sediment of Morroco, and the interiors of Haddock’s ship. If there are momentary traces of manipulation, they’re so quick and minute that I couldn’t catch them. The bountiful sound design also gets its due here, with the dialogue crisp and out front. A full-to-bursting menagerie of sound effects and John William’s reliably rousing score are beautifully balanced in the low end. An excellent watch, through and through.

The grab bag of featurettes afforded here is, as you might expect, mixed in quality. The exploration of the character of Tintin is dutifully informative, as is the featurette on The Volume, the barren stage that essentially makes performance capture a reality. The one on Snowy is cute, and there’s a fascinating bit about Spielberg’s first encounter with Hergé’s series while he was directing Raiders of the Lost Ark. But most of this falls under the rubric of entertaining rather than insightful, and a consolidated single featurette would no doubt have proved more engaging. A DVD copy of the film is also included.

Spielbergian to the bone, The Adventures of Tintin utilizes revolutionary technology and animation for an ostensible nostalgia trip, which has little bearing on Paramount’s exemplary transfer.