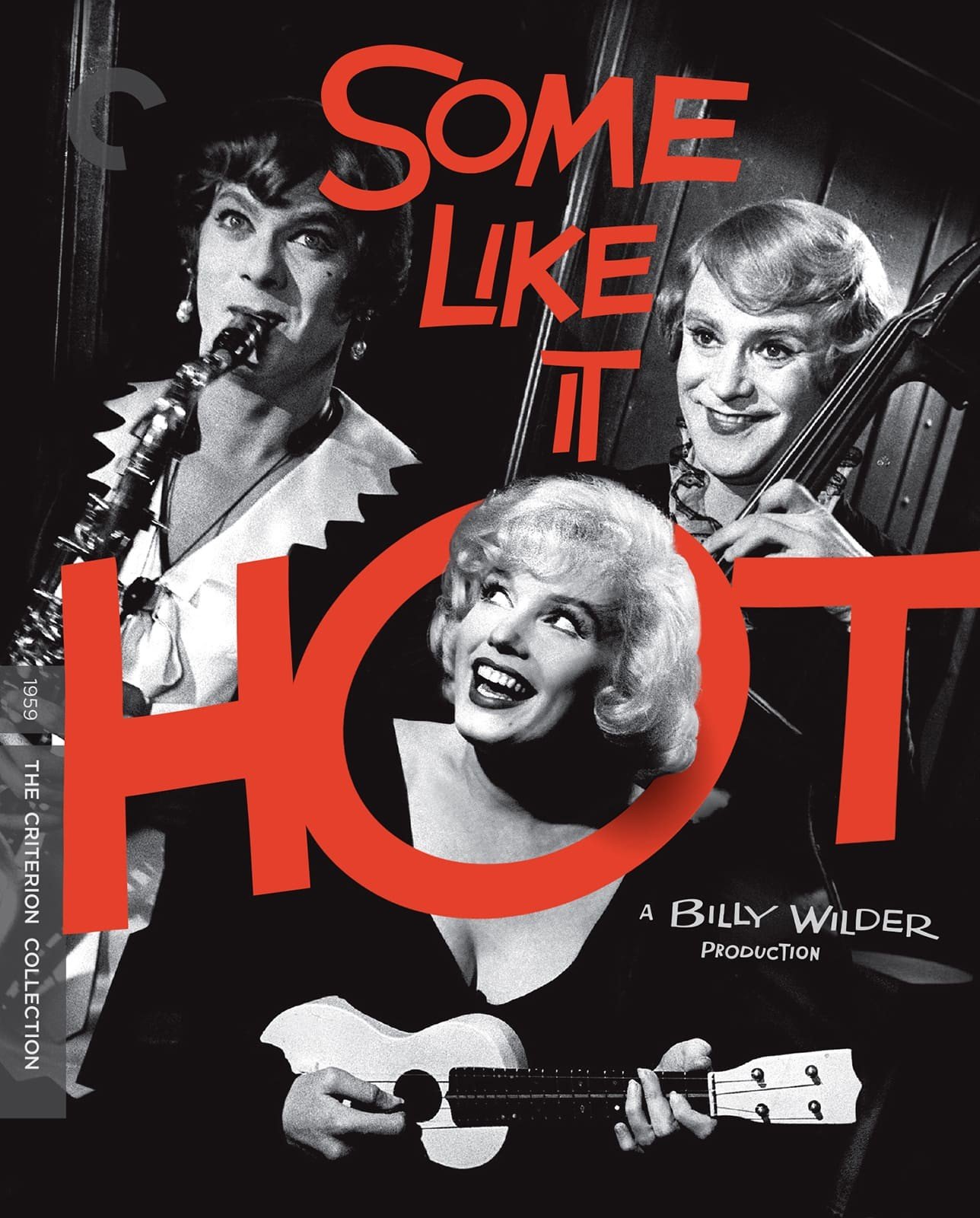 The first time Marilyn Monroe, as the perfectly named Sugar Kane Kowalczyk, walks onto the screen in Billy Wilder’s Some Like It Hot, even the train—with a whistle of steam—can’t resist catcalling her. Heading off to front the Sweet Sues, an all-girl brass band starting a residency as the house band at a posh Florida hotel, Sugar Kane has vowed to land a rich hubby, and the way she retrieves a flask of whiskey from her garter, it’s hard to imagine any man passing up the opportunity. And yet, most men that enter Wilder’s frame are far more interested in Jack Lemmon and Tony Curtis, dolled-up in drag to secure places (as upright bass player and tenor saxophonist, respectively) in the Sweet Sues and hide out from the gangsters they witnessed mowing down a snitch and his associates in a garage—a recreation of the St. Valentine’s Day Massacre. Even the gangsters, late in the film, openly flirt with Joe and Jerry (Curtis and Lemmon) on an elevator, thinking they’re really women.

Of course, Joe and Jerry are the only men who seem interested in courting Sugar Kane, a fantastical suspension of disbelief that goes hand in hand with the idea that no one can tell that Curtis’s Josephine and Lemmon’s Daphne aren’t hiding something under their Orry-Kelly dresses. At first, the setting is prohibition-era Chicago, where the men play as part of a small jazz band in a speakeasy run out of a funeral parlor by criminal kingpin Spats Colombo (George Raft). A raid puts an end to Joe and Jerry’s paychecks, but it fails to capture Spats, who orders the massacre, as are the two out-of-work musicians. Finding themselves the targets of a statewide hunt by both the cops and the mob, Joe and Jerry powder their noses, jump a train, and join up with the Sweet Sues, only to find themselves pursued even there, this time by horny bellboys and elderly millionaires dealing with their umpteenth divorce.

The brilliant rat-a-tat dialogue is courtesy of Wilder and I.A.L. Diamond, his regular writing partner, who had originally conceived Some Like It Hot as a vehicle for Frank Sinatra and Mitzi Gaynor. Only Curtis remained on throughout the project’s entire gestation, as the unbeknownst romantic lead to Monroe’s romantically challenged showgirl. Indeed, Sugar Kane falls hard for Joe, but only as he takes on the guise of Junior, the preposterously wealthy heir to the Shell Oil fortune, in a bid to get the voluptuous singer in the sack. Cynicism, as throughout Wilder’s career, is pervasive here, and once she hears about Junior’s fortune, Sugar Kane can barely keep her dress on in front of Joe, who, as Junior, mimics Cary Grant in yacht-owner drag.

Sugar Kane’s willingness to indulge in the perverse proclivities of the rich is more grounded here than Monroe’s Lorelei in Gentlemen Prefer Blondes, but then, Some Like It Hot is a far more ambiguous affair than Howard Hawks’s extravagantly ludicrous musical. Up to and including the film’s legendary final line, spoken by the great Joe E. Brown as Jerry’s chief suitor, Wilder’s sex comedy confuses sexual definitions on a regular basis and even obliterates them at times, most noticeably in the case of Lemmon’s fearless comic performance. At first attempting to suppress himself from taking Sugar for a roll in his bunk, Jerry later comes back from a date with Brown’s Osgood, shaking maracas and walking on air; Joe insists he repeat “I’m a man, I’m a man, I’m a man” as a sort of mantra. Money, more than gender or even attraction, remains the ultimate aphrodisiac, and if this deeply cynical belief is slightly upended by the film’s ending, as in Wilder’s The Apartment, the idea is never entirely dispelled by the narrative.

Panned by most critics upon its release, the film became a box-office sensation, earning six Oscar nominations and, decades later, a place at the top of the AFI’s list of the 100 best American comedies. Some Like It Hot was a triumph over intellectualism, and it came to be worshipped by intellectuals who, after coming to terms with the fact that the film wasn’t co-written by Rudolf Arnheim, noticed the precise auterism at work within it. Magnificently paced and terrifically funny at nearly every turn, the film was imbued with an inherent distrust of capitalism and big business that Wilder regularly expressed in an only slightly covert manner. Here, the stiff, quasi-charming man who says he will one day run Shell Oil is, put simply, a liar and a sneak. It’s a blunt indictment of a popular U.S.-based company but nevertheless a long way from the manic, radically profane cynicism that Wilder deployed in One, Two, Three, wherein Coca-Cola is more or less America itself.

By the end of the film, Sugar Kane is singing “I’m Through with Love,” but it’s a song she’s been singing all along, gossiping with Josephine about all the lousy musicians who’ve romanced her and then bilked her for all she’s worth. The lead singer of the Sweet Sues doesn’t show up until a solid 30 minutes into the film, but make no mistake, Monroe’s importance in this picture is second only to Wilder’s. A notorious presence on the set, she flubbed lines, arrived late, and tested the saintly patience of her director and co-stars, but on the big screen, she holds us in her gaze, and without a flicker of hesitation.

Monroe even appears to overwhelm Lemmon, whose Jerry takes to repeating, “I’m a girl, I’m a girl, I’m a girl,” as if to divert himself from any frisky business when Sugar Kane cozies up next to him while he’s dressed up as Daphne. Of course, Monroe’s behavior could partially be blamed on the tragic state of her private life; she had grappled with drug problems for months prior to the shoot and suffered a miscarriage toward the end of production. Nevertheless, whatever she put Wilder, Lemmon, Curtis, the crew, and their financial backers through was worth it for what’s on screen: an outrageous, hilarious, and amazingly unpretentious trip through a funhouse of sexual identities.

The Criterion Collection’s brand-new 4K restoration of Billy Wilder’s classic beautifully reproduces Charles Lang’s high-contrast black-and-white cinematography, capturing a stunning level of detail in the film’s deep-focus frames. The disc’s high bitrate ensures there’s not a hint of blur or jitter in the film’s signature musical numbers and gangland action sequences. But the real star here is the uncompressed 24-bit mono soundtrack, whose full-bodied presence is evident as soon as the first bars of “Runnin’ Wild” kick in over the opening credits. Wilder and I.A.L. Diamond’s keenly polished dialogue comes through with absolute clarity, allowing the viewer to pick up on even the performers’ subtlest vocal tics and comedic inflections.

Criterion provides a solid but fairly routine assortment of supplementary materials here. Only a brief documentary on fashion designer Orry-Kelly is original to this release of the film. The rest include television and radio interviews and breezy behind-the-scenes featurettes produced for earlier MGM home-video releases. An audio commentary by film scholar Howard Suber, which is peppered with audio clips of a Jack Lemmon interview, has been repurposed from Criterion’s own 1989 laserdisc release, and it offers an incisive, highly academic study of the film, illuminating in particular the ingenious comedic structure of Wilder and Diamond’s script. However, the same can’t be said of Sam Wasson’s cursory booklet essay, whose shallow accolades for the film actually manage to diminish its achievements.

The Criterion Collection’s impeccable 4K restoration ensures that this is the definitive home-video experience of Billy Wilder’s classic comedy, even if the disc’s selection of extras mostly goes only skin deep.