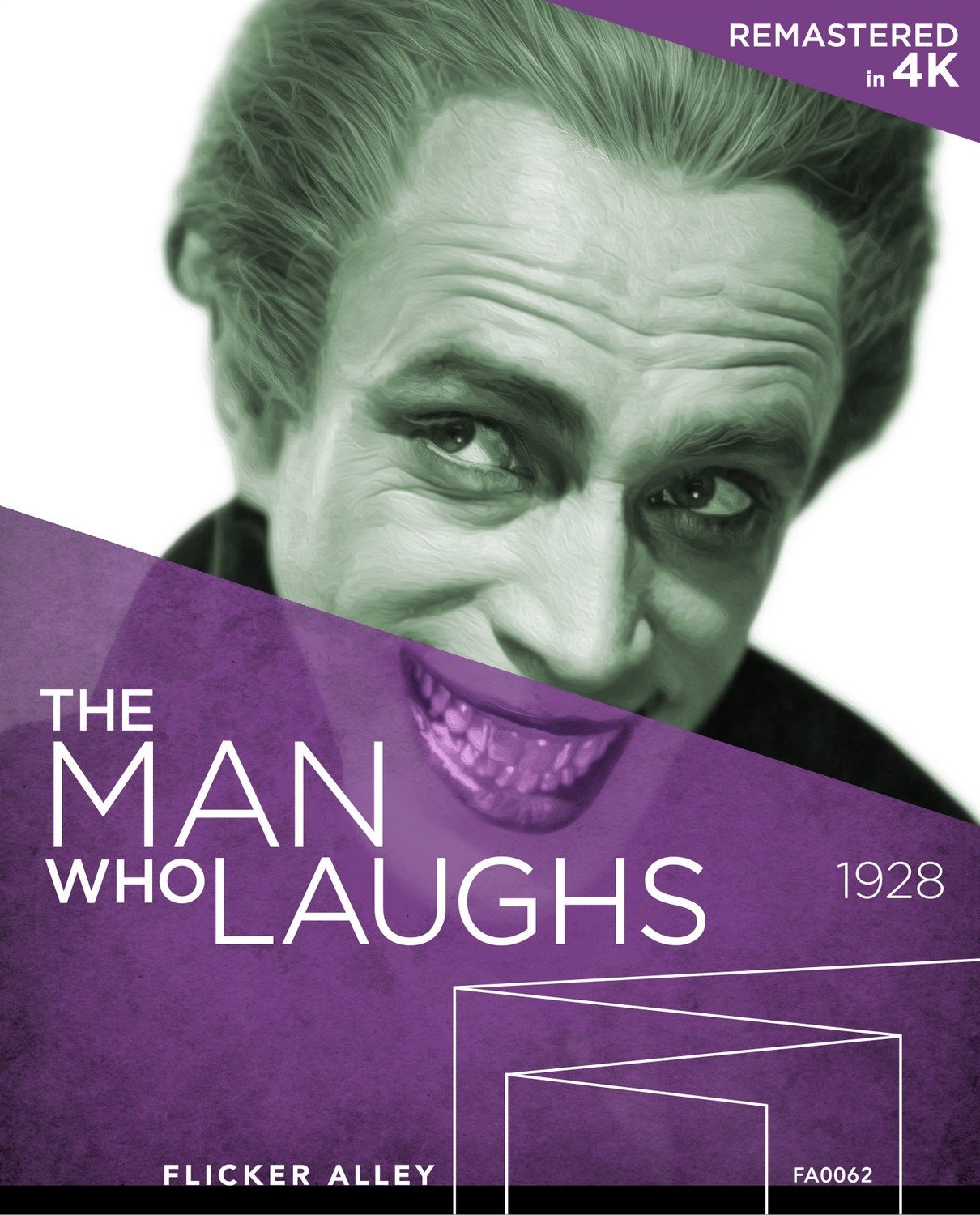 Early on in Paul Leni’s The Man Who Laughs, the surgically perma-grinning Gwynplaine looks at himself in his dressing-room mirror. A one-time son of English royalty who as a boy was turned into a freak-show attraction by political enemies, Gwynplaine spends his time as a traveling performer whose wide crescent smile sends the great unwashed into tizzies of both horror and, eventually, delight. As he looks at himself in the mirror, he’s struck with the hollow ghastliness of his life, and his face sags into a visage of misery, with the exception of his perpetual grin. A moment of bravura acting by Conrad Veidt (already famous for his portrayal of Cesare in The Cabinet of Dr. Caligari), it’s topped by a wonderful cinematic grace note when Gwynplaine closes the doors of the mirror and finds them ironically painted with the Greek masks of comedy and tragedy.

Whether it was because Lon Chaney had recently signed a contract at MGM and was unavailable for work at Universal, or because one of the studio’s founders, filmmaker Carl Laemmle, had a great eye for German expressionism, The Man Who Laughs took the Universal “super jewel” series of gothic horror to new and unparalleled heights in cinematic intelligence. Like many a German expressionist nightmare, the film, based on a novel by Victor Hugo, is a collision of non-complementary angles and framing that confuses as often as it elucidates. At the same time—and unlike The Cabinet of Dr. Caligari or Leni’s own 1924 silent Waxworks—it it’s also remarkably clean in its delineation of action.

In the same manner that Veidt is both the film’s central monster as well as its main source of pathos (all but laying out the blueprint for James Whale’s Frankenstein), the film’s fascination with bric-a-brac and its tendency toward spare, minimalist compositions is evidence of a stylistic schism. This obsessive dualism that runs throughout the film also informs the love triangle between Gwynplaine, his blind co-star girlfriend, Dea (Mary Philbin), and the Duchess (Ogla Baclanova). It’s a little off-putting—and probably also a function of Laemmle’s insistence that The Man Who Laughs rival Phantom of the Opera’s phenomenal box-office success—that all superfluous characters basically adhere faithfully to one of two sides of the classic good-evil dichotomy, but even that framework could be taken as a critique on Leni’s part of Hollywood’s psychologically limiting archetypes. Veidt’s terrifying grin masks the horror of having one’s looks be objectified at the expense of their humanity.

Flicker Alley’s transfer of a new 4K restoration by Universal Studios brings a remarkable depth and level of detail to almost every shot. A healthy amount of grain is evident throughout, and the strong image contrast highlights both the film’s impressively detailed set design and the intricacies of the actors’ faces, particularly that of Conrad Veidt, whose tortured, tragicomic expressions present the film’s pathos at its most overwhelming. There’s the slightest bit of flickering in about one-third of the shots, and some far less frequent signs of scratching, but for a 90-year-old film, such minor artifacts of natural decay hardly count as negatives. The Berklee Silent Film Orchestra’s new score sounds fantastic, boasting a dynamic range that perfectly accompanies the film’s dramatic ebbs and flows.

The lone extra on the disc, aside from a collection of production stills, is the short but informative “Paul Leni and The Man Who Laughs.” Despite its title, the featurette’s focus is less on Leni than on studio head Carl Laemmle, whose “fondness for literature’s quirky side” led him to produce The Hunchback of Notre Dame and Phantom of the Opera before taking on The Man Who Laughs. After quite a bit of historical context surrounding Universal’s release of the film and the reasons behind the studio’s inability to cast Lon Chaney in the lead, Leni is given his proper due, rightfully celebrated for his uncanny ability to mix black humor with an expressionistic eye. The Blu-ray, and accompanying DVD copy, comes with a 20-page booklet with an array of production stills and two essays. The first, by film historian Kevin Brownlow, covers the film’s production history in detail and touches on each of the major performances, while also praising the film for its innovation and influence on later films such as Frankenstein and The Old Dark House. The second essay, by Sonia Coronado, discusses the creation of the new score and, in the process, provides unique insight into the scoring of silent films.

Review: Agnès Varda’s One Sings, The Other Doesn’t on Criterion Blu-ray

Review: Claire Denis’s Let the Sunshine In on Criterion Blu-ray