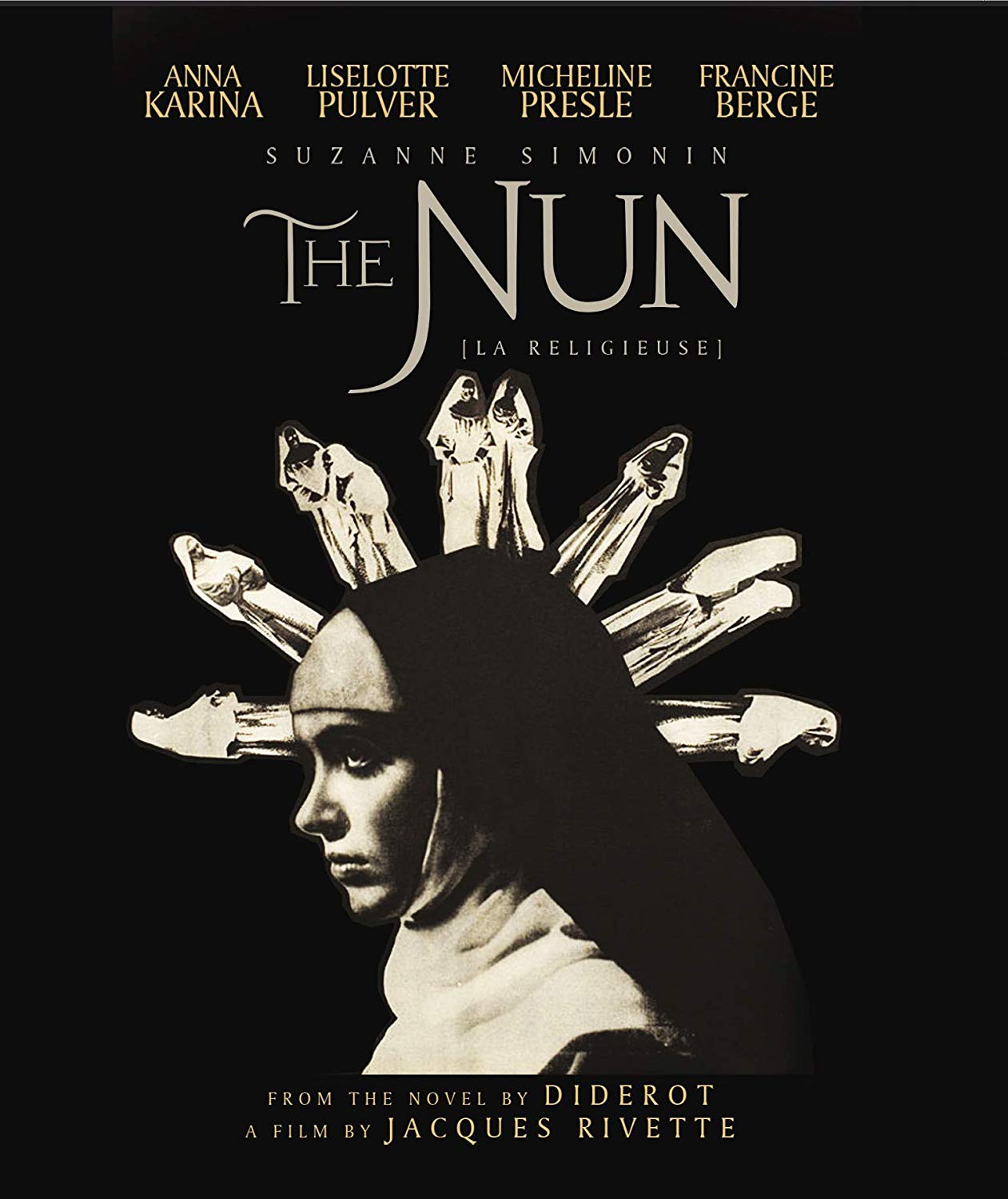 Jacques Rivette’s La Religieuse is based on an epistolary novel by Enlightenment philosopher Denis Diderot that decried the injustices of the Catholic church under the ancien régime by adopting the voice of a young woman forced into a convent. In this adaptation by Rivette and Jules and Jim screenwriter Jean Gruault, Diderot’s protest against the violation of an individual’s free will becomes not only a reflection of the individualist ethos of the French New Wave, but also an augury of uprisings of the late 1960s.

Suzanne Simonin (Anna Karina) is a young bourgeoise whose parents compel her to take vows as a nun after her father discovers she’s the child of an affair. Genuinely devout, Simonin nevertheless has no interest in a nun’s vow of “chastity, poverty, and obedience,” and endeavors to leave religious life and rejoin the world. The Nun opens with the ceremony at which she’s meant to pledge herself to her new order, as a desperate Simonin breaks away from the ceremony and begs to be let free, framed from the other side of the iron bars which she grasps to make her plea to the assembled witnesses.

Rivette would become known for his improvisational approach to the fiction film, but La Religieuse has all the marks of a tightly controlled production, from the way the director’s long takes follow the action with subtle but emotive re-framings, to the production design’s coordination between the gray-green of the nun’s habits and their convent’s walls (they seem to dissolve into their setting), to Gruault’s often poetic dialogue (“This robe has attached itself to my skin, to my bones,” Simonin laments at one point).

Even the lack of subtlety in aspects of Rivette’s aesthetic—as in the iron bars in the opening scene that paint the church as a prison—has a purpose, as the film is peppered with Brechtian touches that call attention to themselves as formal techniques. Just as we become engaged with the melodrama of Simonin’s dilemma, we’re jolted out of our credulity with a jump or smash cut, or a snippet of noise from the sparse, modern score. Such moments remind us that, while the story is set in the baroque past, it’s told with an eye toward the modernist present, when the individual is still under siege by the disciplinary control of societal institutions.

Rivette is aided in this oscillation between empathetic drama and distancing formal abstraction by Karina’s performance. It’s a role that could easily turn into hysteric caricature, particularly when Simonin’s convent confines her to her quarters, denies her food, and frames her as possessed by the devil. But Karina deeply communicates the trauma of a person trying to hold themselves together as the mechanics of power devastate her mind and body, and Simonin never seems to be merely a metaphor for the offenses against the individual perpetrated by the system—though, of course, she is that too.

Simonin’s first convent, run by Sister Ste Christine (Francine Bergé), exercises its dogmatic piety through cruel punishment and masochistic penance. It prohibits communion with even the natural world outside the gates, and relationships between the women are strictly regulated. After her ordeal, Simonin manages to have herself transferred to another convent, this one overseen by Madame de Chelles (Liselotte Pulver). Here, the nuns behave almost as school girls, frolicking in the yards and attending informal gatherings in the mother superior’s quarters. The convent’s seeming openness, though, masks the cult of personality de Chelles fosters around her, which she exploits to seduce the young nuns.

Sexual control, like institutional violence, is exposed here as another form of oppression women face, but the film’s condemnation of this oppression doesn’t moralize either about homosexuality or religion per se. The problem is the institutionality of the church rather than its professed system of belief, and La Religieuse is rather remarkable for the way in which it codes de Chelles’s unwanted advances as the continued violation of Simonin’s right to self-determination rather than a trespass against a moral order.

An emotionally searing conclusion drives this point home, but as memorable as this finale is, the romantic individualism typical of the New Wave belies the spirit of collective rebellion implicit in Rivette’s Brechtian touches. The film presents us with groups of women who, through violence or sex, relay the patriarchal power of the church, but it’s unable to imagine an alternative sphere where bonds between women might foster a more positive society. Though it critiques and defies the pretenses of hierarchical religious community, neither La Religieuse nor its main character is ultimately able to see a way out of alienated individualism.

The transfer on this Blu-ray is from the gorgeous 4K restoration released in theaters last year, and it brings a renewed vitality to both the subtle color gradations of cinematographer Alain Levent’s muted gray-green palette throughout the scenes that depict Suzanne’s ascetic life, as well as the momentary flourishes of color—like the striking blue of her scarf early in La Religieuse—that point to the young woman’s desire for life outside the convent. The film, though, is at its most radical in its soundtrack, and the precise, often jarring use of off-screen sound and nondiegetic music is mixed evenly throughout the two channels.

Much of the extras here focus on the controversy surrounding La Religieuse. Indeed, while the featurette “Susanne Simonin, La Scandaleuse” is described as a “making-of documentary,” it’s much more a discussion about the film’s troubled release. Dennis Lim’s booklet essay, though short, provides a more wide-ranging account of the film’s making. A commentary track by film critic Nick Pinkerton covers much of the same ground as the featurette but includes a more thorough history of the story’s origins in the French Enlightenment.

Featuring a searing performance from Anna Karina, La Religieuse is much more than the scandal that made it famous in France. Kino Lorber’s release of the film’s recent 4K restoration is a service to a landmark film of the French New Wave.