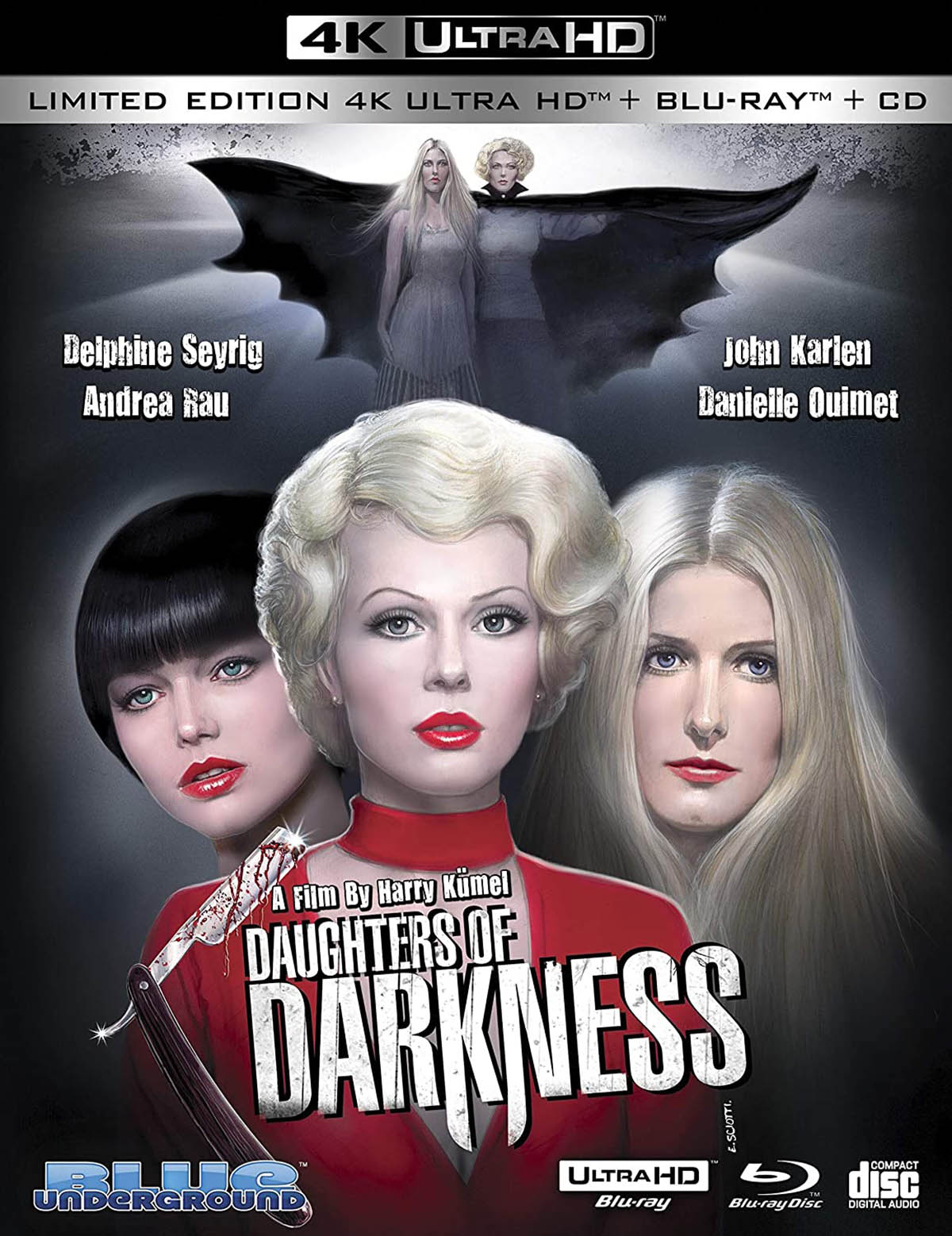 The lifeblood of marriage was all but drained by the time Slovakia’s sullen vampires reached it in the early 1970s. Not that the bloodsuckers were the only ones targeting matrimony. Harry Kümel’s sapphic, Eurotrash vampire drama Daughters of Darkness has less in common with the likes of Vampyros Lesbos than it does with Who’s Afraid of Virginia Woolf? and Score, to name two great and, to be more direct, intensely homophiliac debasements of the sanctity of heterosexual newlywed-lock. Although, inversely proportional to Radley Metzger’s tour de foreplay Score, Daughters of Darkness kicks off with its hottest act of carnal pleasure, and as it turns out, it’s the requisite first post-nuptial screw shared by man and wife, Stefan and Valerie (played by John Karlen and Daniele Ouimet in full, hirstute The Joy of Sex glory).

But all is clearly not well in paradise, because their post-coital banter sees the two admitting that they don’t really love each other, perhaps half in jest, but certainly no less than half. Their lack of love makes them perfect for marriage, they conclude, and their perfectly imperfect union makes them an attractive target for the dissolute doings of Countess Elizabeth Bathory (an infallibly elegant Delphine Seyrig), the only other guest of note at the Belgian hotel at which Stefan and Valerie are spending their honeymoon. The countess wastes little time driving a wedge between the two, in what at first appears to be her own licentious way of killing the boredom of being moneyed enough to have one’s vacations stretch long into the off-season. It’s not long before the hotel’s concierge recognizes Bathory’s face, unchanged from how it was three decades prior. And then the morning-edition headlines start ringing the alarms about serial killings in nearby Bruges, and the countess’s traveling companion, Ilona (Andrea Rau), starts pulling grotesque poses outside the young couple’s bedroom window.

Kümel’s eroticism is far too methodical to ever tip over into the hysterical prurience that marks most of the other films that Daughters of Darkness would likely be compared to in retrospect. The lesbian overtones are strong but stingy, as though female-female lip-locks were to be used as sparingly as saffron. One wonders if he held himself back owing to Seyrig’s participation, just as one can’t fail to see lesbianism as preferable to whatever the violently AC/DC playboy Stefan’s got going on the side. (The film’s most shocking horror isn’t an act of bloodletting, but the long deferred reveal as to who Stefan’s mother really is and why he’s afraid to introduce his blushing bride to her face.) Whatever the cost for artsploitation perverts’ future enjoyment, Kümel’s impulse to remain on the waning edge of eroticism turns what could’ve been another cheap thrill into a genuinely unsettling examination of the human race’s most happily sanctioned form of vampirism: man-woman couplings.

In short, a revelation, especially for those who own Blue Underground’s 2011 Blu-ray, on which the black levels are so strong that they sometimes threaten to swallow up the rest of the screen with them. No more, as the 4K restoration practically reinvents Daughters of Darkness right out the gate as rosy-faced Stefan and Valerie screw on the night train to Belgium, their compartment bathed in warm, naturalistic hues. The image is remarkably sharp across the board, which also means that there’s plenty of film noise, especially noticeable on the actors’ faces and especially light backgrounds, which won’t be a concern for anyone who likes being reminded of a time when all films were shot on celluloid. The English 5.1 DTS HD, which is preferable to the mono French dub, also consistently proves its might, especially when François de Roubaix’s superlative score fills the soundtrack.

Most of the extras here have been carried over from Blue Underground’s prior Blu-ray and DVD editions, including the self-serious and esoteric commentary featuring director Harry Kümel and a second with actor John Karlen and journalist David Del Valle that verges on proving Kümel’s apparent reservations about heterosexual masculinity entirely justified. You’ve got to love an actor who all but thanks the gay community for worshipping him and, in the same minute, licks his lips over his female co-stars, wishing he could go back and kiss them all over again. Not that Kümel and co-writer and co-producer Pierre Drouot prove much better when, as they’re taking a camera crew on a tour of the hotel locations where they shot Daughters of Darkness, they take pot shots at Danielle Ouimet’s allegedly robust measurements. Both Ouimet and Liza Minnelli look-alike Andrea Rou get a word in, and it’s a little saddening that the late Delphine Seyrig didn’t end up getting the same chance. All this chauvinism gets balanced by the inclusion of a third commentary featuring critic Kat Ellinger, whose enthusiasm for the film (and its restoration) is infectious from the start. Ellinger spent a decade writing Devil’s Advocates: Daughters of Darkness, and the knowledge that she brings to her commentary is enriched by conversations she had with Kümel at various points. No inclusion of Vicente Aranda’s The Blood Spattered Bride this time around, but de Roubaix’s score is included on its own separate disc. Finally, this three-disc set comes with a collectible booklet that includes a new essay by former Fangoria editor-in-chief Michael Gingold.

Making its 4K UHD debut, Daughters of Darkness gets a significant facelift from Blue Underground alongside a smattering of new extras.