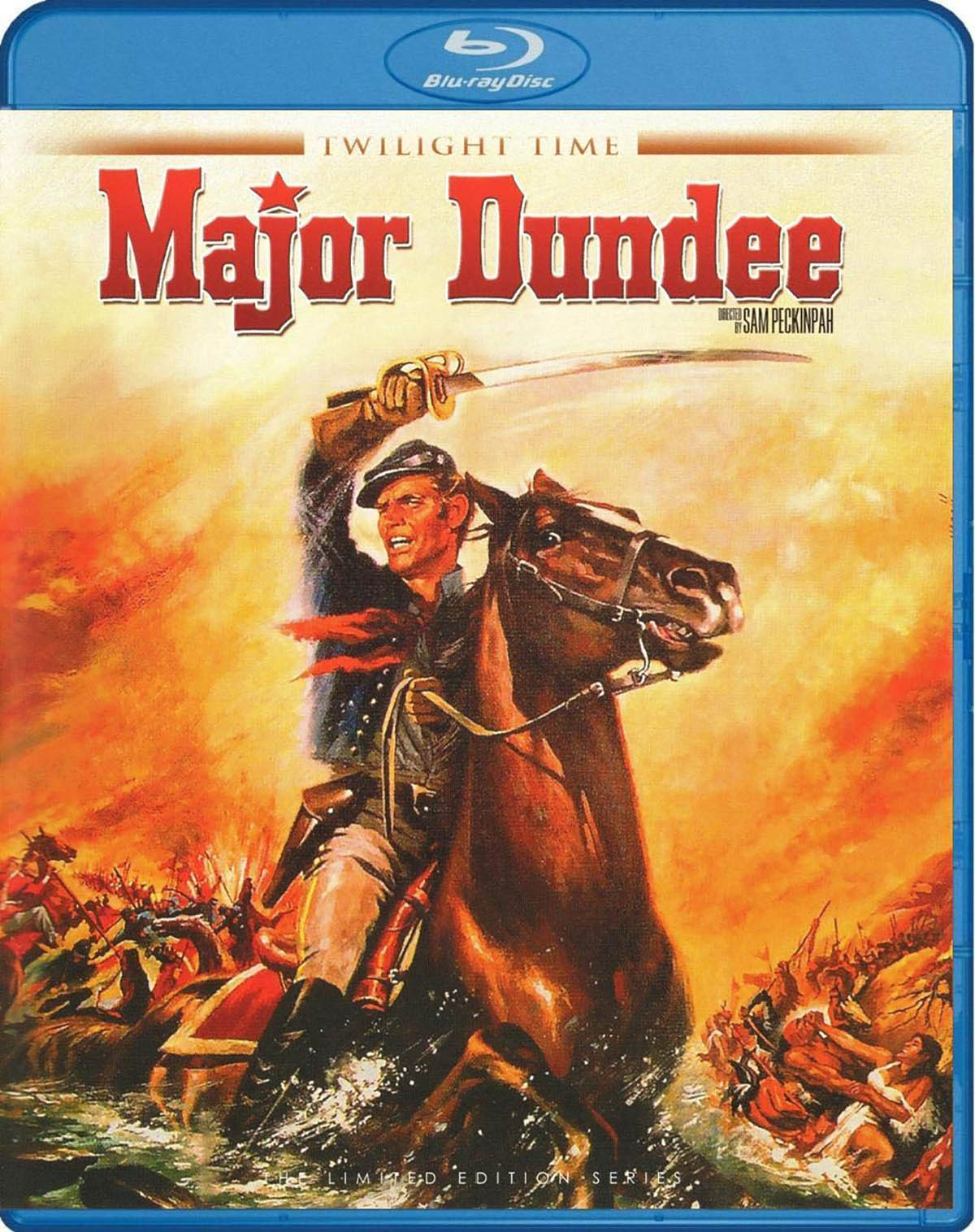 “It is the face of a potential hero,” wrote Norman Mailer in late 1963, “but he embodies nothing, he personifies nothing, he is power, rather a quizzical power, without light or principle.” The quote concerns John F. Kennedy, in whom Mailer had invested both optimistic energy and a voluminous word count, and by whose first few in-office fumbles Mailer felt bamboozled.

It’s worth considering that this opprobrium was published around the time that Sam Peckinpah was developing Major Dundee from its initial script by Harry Julian Fink; it’s equally worth considering that both pieces were written prior to November 22 of the same year, the day that rendered all such criticisms not only moot but calumnious. The protagonist of the film, a craven and anchorless mid-ranking Union soldier played with bitingly self-reflective arrhythmia by Charlton Heston, has neither Kennedy’s cerebral suavity nor his managerial gift for inspiring the throng. Dundee does, though, represent an attack on the pageantry of authority so similar to Mailer’s that one wonders whether the symmetry partly explains the film’s failure at the box office. How would Major Dundee have played at the end of Kennedy’s first term had he lived to accelerate the Vietnam police action himself?

We’ll obviously never know, though the similarities between Kennedy and Dundee are striking if slight. Bay of Pigs-esque shame glimmers in the backstory of the latter, who’s banished before the start of the film to a southwestern Confederate POW camp for going rogue at Gettysburg. By the time we’re introduced to the major, though, he’s planning to charge out of this ignominious position and into ambiguous glory by avenging the lives claimed by an Apache raid that Sierra Charriba (Michael Pate) led against a settlement in New Mexico Territory. Dundee swiftly recruits a brigade for this rather familiar guerrilla of good faith out of the Confederate stocks at his disposal, which include several faces familiar both to him and to us: Richard Harris is Benjamin Tyreen, a British ex-pat with whom Dundee attended West Point; James Coburn plays a grizzly man with one arm gone; and Warren Oates, Ben Johnson, and LQ Jones are scowl-y faced miscreants whose energy can’t be controlled or trusted.

Only a man with a steel-toed countenance and enough conviction to feed and align the morale of an entire army could wrangle this chaotic crew into a hive-minded military operation. And Dundee isn’t that man, though at times he fools himself into believing that he is. He freezes before controversy, becoming nearly a ghost. He threatens to hang Tyreen for treason until the shackled soldier gets impatient and socks Dundee in the jaw; Dundee responds by recruiting him as second in command for his Apache Task Force, whereupon Tyreen spends the rest of the film playing the arm-twisting, reality-checking Bobby Kennedy to Dundee’s John. En route to Charriba’s stomping grounds below the border, predictable racial tensions break out between members of Dundee’s scrappy platoon that the major more or less leaves to be sorted out between the men—a vague echo, possibly, of Kennedy’s sluggish support of the civil rights movement. The sinewy support a big-boned, fire-breathing preacher (R.G. Armstrong) in the ranks provides an ostracized African-American intimidates us more than puts us at ease due to the sheer unpredictability of the forces under—or rather, out of—Dundee’s control.

Whatever its socio-political relevance, though, Dundee’s inability to act also lends itself to an aesthetic instability that shows Peckinpah testing many of his signature flourishes for the first time; it’s surprising how identifiably Peckinpah-ish Major Dundee is compared to his two earlier features. The tortuous, drunken, slightly sexed path that the characters chart south features such auteur-ly hallmarks as: narrative-diverting longeurs so longeur-ish that we nearly forget the central conflict; rivulets of blood so unglamorous that it appears cheap; shots, particularly during the few gun fights that break out, whose presence is so fleeting that one would need a Buddhic third eye to discern them; and women whose presupposed fungibility winds up underscoring their individual necessity. We additionally espy all of this senseless and often smoke-blanketed carnage through the eyes of a barely 20 officer (Michael Anderson Jr.) whose diary entries provide intermittent, laconic voiceover narration—and whose naïveté might very well be exacerbating the major’s ineptitude and impotence.

Still, Major Dundee is best appreciated as the last lichen-like bit of culture to have blossomed from the not-quite-here, not-quite-there dampness of the ‘60s prior to the John F. Kennedy assassination, as far as its socio-municipal mindset is concerned. Where even Peckinpah’s later work in the decade (The Wild Bunch especially) would react against the national disillusionment with statutes and figureheads by proffering an alternative, collaborative model, Major Dundee is a harrowing vision of a (military) dictatorship running around with its head lopped off. The film proves Peckinpah is bold because it questions the very idea of centralized leadership while a fallen president was undergoing beatification. The film proves Peckinpah is brash because the one question it fails to ask is: “Too soon?”

A saintly upgrade from the standard edition DVD of Major Dundee, Twilight Time’s high-def transfer of the restored film (a print of which toured in 2005) only looks ugly when Sam Peckinpah would have wanted it to. The flat, harsh-colored vistas through which Dundee and his band of not-so-merry pranksters move manages to be both spacious and isolating; the clarity of the image is such that plumes of smoke billowing across the frame seem to mark (and obscure) a sinisterly precise middle ground between the characters and the horizon line. Previous transfers have felt far more autumnal, possibly because of celluloid wear and tear that bled cyan into magenta and vice versa, but this deftly calibrated copy has all the smarting, orderly brightness of a summer-day hangover. The 5.1 surround mix on the extended cut features an obviously contemporary score whose whirling and twirling though the speakers doesn’t always jibe with Peckinpah’s straight-forwardness, but the boost offered to the sounds of shouts and cannons is very welcome, indeed.

The extended and theatrical cuts of Major Dundee are markedly distinct entities, the former featuring far more detailed subplots with respect to the brigade’s racial tensions and Dundee’s sexual/domestic dysfunction. Some seeing the “original vision,” or as close as we’ll ever get to it, for the first time may mourn the loss of implicitness where the main character’s self-castration-by-alcohol is concerned (a Peck-adillo of the director’s). But the expository context provided by the new edit’s reinstated material allow the film to resonate far more strongly with our hindsight of the mid ‘60s, especially with respect to the era’s slight overthrowing of racial and gender roles. (In one extended scene, Dundee shrinks away into a corner with a ratty poncho slung o’er him while his love interest and his nurse decide whose man he is.) The film-historian panel on the audio commentary does a fine job of parsing what of this content was likely a conscious reaction to social change and what was the result of Peckinpah’s binge-drinking; Julie Kirgo’s included essay similarly makes a case for the film as a “pre-Vietnam” salvo. Some more extended scenes and outtakes round out the set, giving viewers as much access to the raw pulp of Peckinpah’s early masterpiece as can be granted.

Night’s Black Agents: Jean Rollin’s The Grapes of Death and Night of the Hunted