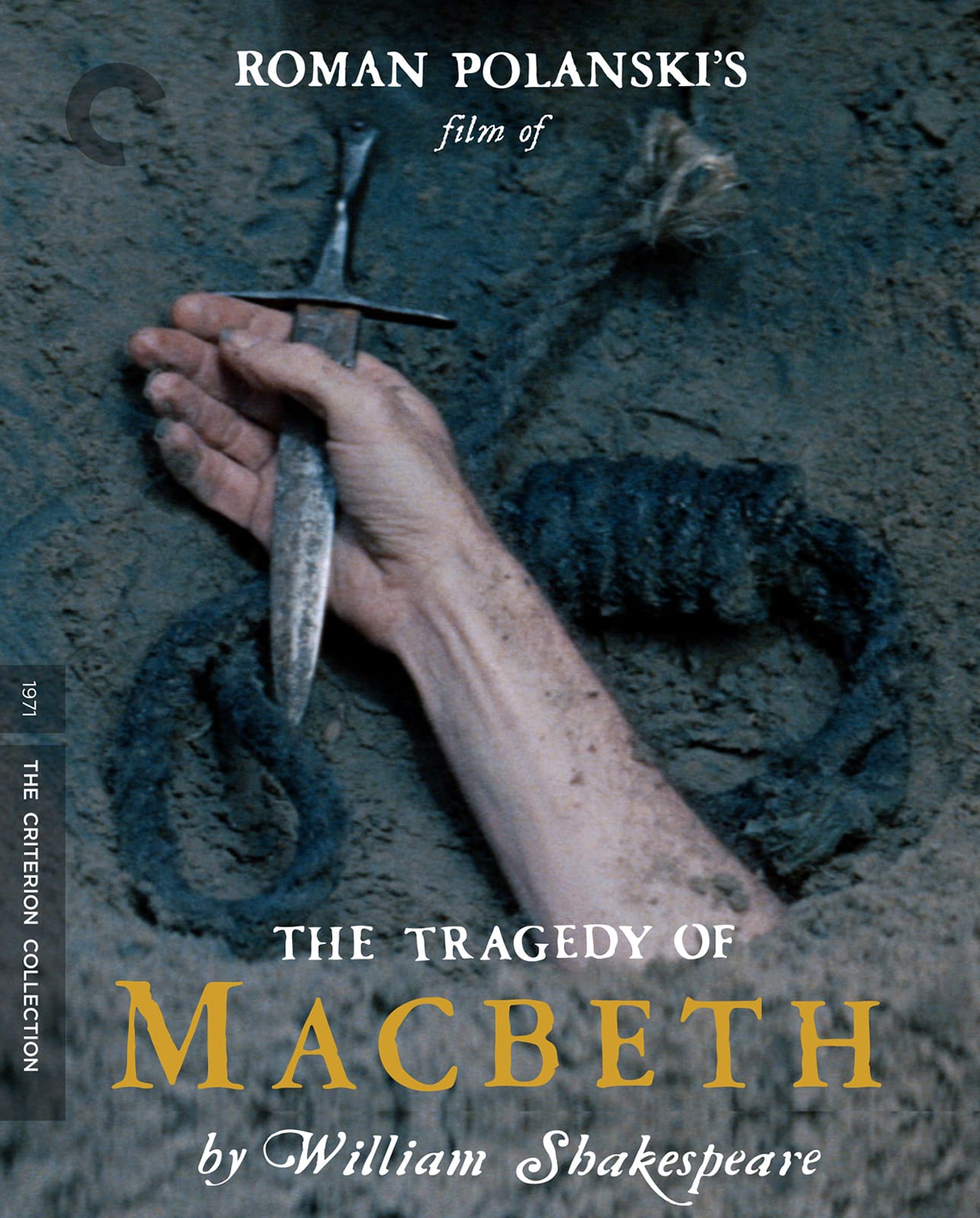 Of all the filmed versions of the Scottish Play, Roman Polanski’s 1971 film preserves its horror with the purest simplicity. Obscuring fog and smoke hide the battle between the Scots against the traitorous Thane of Cawdor during the opening credits, and the only glimpse of the fighting we get comes at its conclusion, whereupon a Scottish soldier checks an enemy casualty and viciously clubs him when he stirs. Candlelight is brighter than the sun, forever buried behind gray clouds, and Macbeth’s castle appears to grow out of stone, with just enough rooms and walkways emerging from rock to be barely hospitable. The play feeds off of Macbeth’s unquenchable thirst for power, but Polanski’s film silently asks why anyone would kill to rule this miserable territory.

The grim atmosphere is more than matched by the performances, which boil down the characters to their most venal essences. From the first moment Macbeth (Jon Finch) appears on screen, in a close-up that quickly pans over to frame a mass hanging in the background, Finch gives the impression of a soulless creature. So many stage and screen adaptations ascribe much of Macbeth’s ambition to the goading of his wife, but Finch makes it clear that the Thane of Glamis is nothing more than a gifted killing machine, someone who will leap at the chance to seize control though he has no notion of what to do with it. For her part, Francesca Annis plays Lady Macbeth with a gentle touch, not the conniving sadist that is the character’s iconography, but as more of a codependent accomplice. Even Banquo (Martin Shaw) gives into his baser desires in this film: Though he has no lines that Shakespeare didn’t already give him, Banquo gets isolated in the frame in such a way that his own speculation about the witches’ prophecy betrays no small amount of hope that his sons really will inherit the crown.

The darkest energy, however, comes from Polanski himself. This was the first film the director made in the aftermath of the Manson family’s murder of his wife, Sharon Tate, and their unborn child, and the trauma of that event weighs heavily on this gory production. Technically speaking, the director operates at his usual level of quality, striking a balance between post-New Wave roughness and theatrically lit, stably mounted master compositions. Polanski can employ dolly shots like no other, and his curving track pans around the weird sisters’ gathering near the start, or of Lady Macduff’s chambers before Macbeth’s men arrive, are thoroughly unsettling by dint of their unnaturally smooth motion and probing invasiveness. And when soldiers do dispatch Lady Macduff and her son, it’s all but impossible not to read the grisly sequence as an exorcism of the murders in Polanski’s own life. Though this film grounds the material in grimy, blood-spattered realism, it’s hypnotically focused on the mystical, cultish elements of the play that tug at the characters’ consciences. The youth of the two leads ostensibly makes the Macbeths’ impatient, murderous desires more believable, but their resemblance to addled, toxic hippies who have abandoned any sense of peace for power-mad bloodlust is the film’s most disturbing touch.

Despite Roman Polanski’s exacting, production-delaying perfectionism, some of Macbeth’s location shots look rough even in light of a 4K restoration. Criterion’s Blu-ray reflects these inherent flaws, especially in early shots on the beach that flicker between contrasts and contain sheets of grain. In short order, however, the image stabilizes and shows off the film’s rough beauty. The transfer preserves the natural color palette and flesh tones, but it also brings out the most in the more stylized shots, some of which resemble medieval tapestries. The 3.0 surround track likewise calls attention to the careful sound design, with expertly timed silences and outbursts as crucial to the film’s thoroughly unnerving mood as its bleak visuals.

“Polanski Meets Macbeth,” a 1971 behind-the-scenes documentary about the making of the film, includes copious amounts of on-set footage that shows Polanski’s fussy working method, as well as some of the trials and tribulations of the shoot. More wide-ranging is the new, retrospective feature, “Toil and Trouble.” Featuring interviews with Polanski, former Playboy executive Victor Lownes, and others, the hour-long documentary provides useful context for the beginnings of the project, the production, and the film’s reception and legacy. Also included are Dick Cavett’s 1971 interview with Kenneth Tynan, which covers the critic/writer’s controversial theatrical career and briefly touches on Macbeth, and an excerpt from a 1972 episode of the English show Aquarius that features interviews with both Polanski and Peter Coe, a theatrical director then putting his own updated take on the play. Finally, there’s an accompanying booklet containing an essay from critic Terrence Rafferty.

Roman Polanski’s Macbeth is by far the most uncompromising and gory of the many adaptations of the play, and its viciousness is perfectly preserved by Criterion’s new Blu-ray.