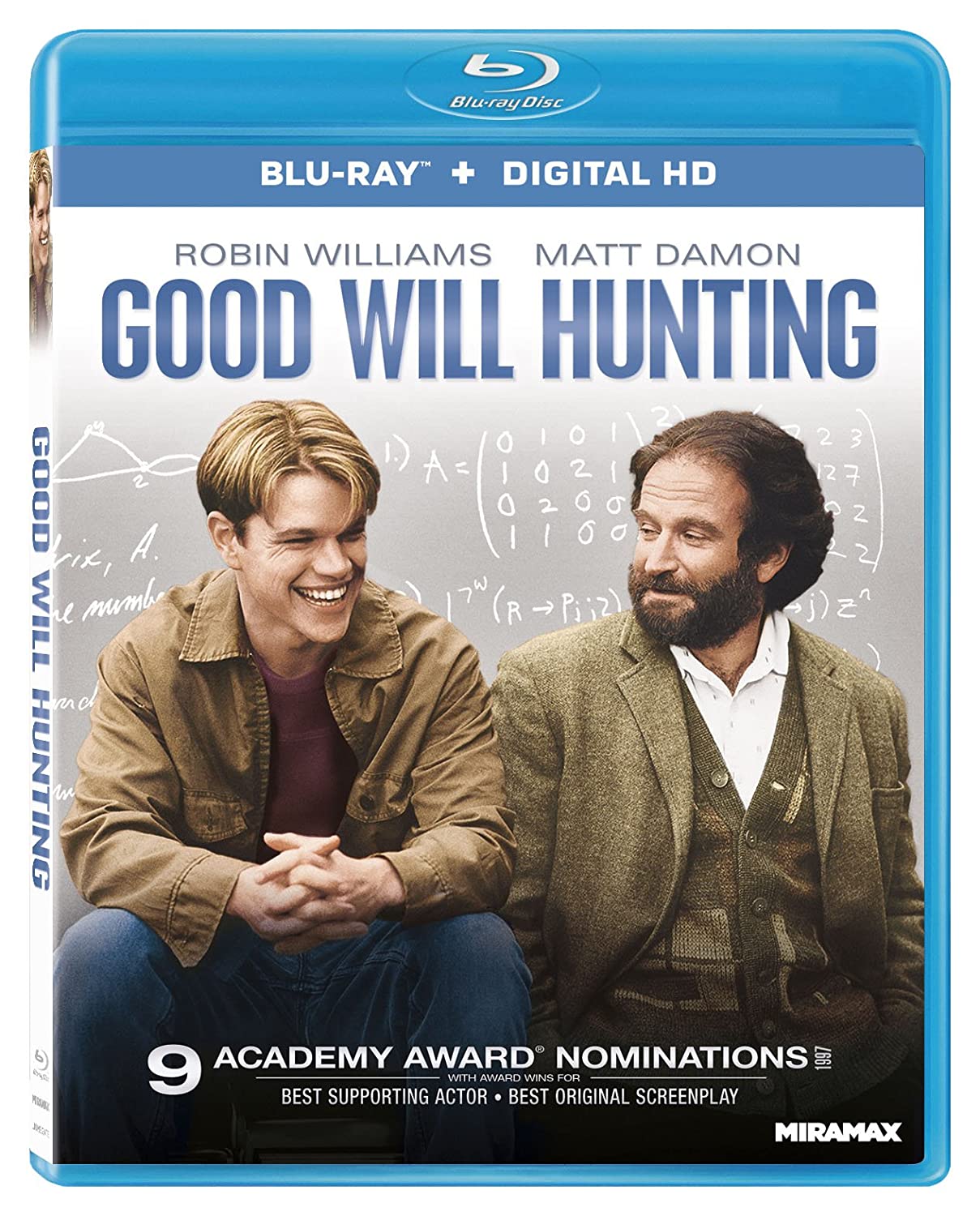 If Gus Van Sant’s cred with the arts crowd isn’t exactly on par with Jim Jarmusch’s, it certainly represents a paradigm for longevity in a business that has a track record of whitewashing any and all artists with ambitions beyond narrative efficiency or, dare I say, sufficiency. Such criticism could be (wrongly) leveled at Good Will Hunting, the 1997 drama that remains the biggest shot in the arm Van Sant’s career has yet to receive, while also giving a boost to Robin Williams’s dramatic career. Williams, in his Oscar-winning role, plays Sean Maguire, a down-and-out psychologist slumming at a Boston-area community college until he’s offered a special case by his old college roommate, Gerald Lambeau (Stellan Skarsgård), an MIT professor and world-renowned mathematician. The case is that of the titular janitor (Matt Damon in his first major role), who’s preternaturally gifted in the area of mathematics to the point that the NSA is ready to offer him a cherry job with less than a high school education under his belt.

Hunting is a smart aleck, a troublemaker, and a bit of a brute, no doubt the outcry of several years of sickening abuse from his foster parents. The first major sequence we see with Will follows him from recognizing a bully who tormented him in kindergarten to beating him senseless on the local basketball court. (Van Sant’s brilliant use of sound touches the sublime here, as Gerry Rafferty’s “Baker Street” emerges strongly but for a moment before dissolving into a sea of rapturous atmospheric noise as Will’s gang squares off against the bully’s entourage.) Having impressed Lambeau by solving a handful of genius-level equations anonymously, Will dismisses every single one of Lambeau’s psychologist friends, but, following a test of wills, takes to Sean, who’s from the same no-joy neighborhood of Southie that Will grew up in.

As much as this relationship is the central focus of the film, there’s an oddly beneficial lack of narrative stress on the outcome of Will’s sessions with Sean. This makes room for a needless, but nevertheless effective romance between Will and a Harvard med student (a very good Minnie Driver), but it also allows Van Sant to indulge in his love for studying masculine communities. Though certainly not as theatrical as the endearing hobos of My Own Private Idaho nor as splendidly spontaneous and nervy as the skater kids of Paranoid Park, Will’s relationship with his gang of friends, played very well by Cole Hauser, Casey Affleck, and, most prominently, Ben Affleck, has such a palpable sense of shared history that you immediately connect to their hard-bitten camaraderie. When Ben Affleck, in what is still his best performance to date, delivers his final speech to Damon, striking hard at the core of wasted potential, you can feel the tremors of the heart that both characters feel for one another, underneath the deluge of curse words, dick jokes, and drunken proclamations.

Of course, the very definition of potential is at the heart of the film. The script was written by Damon and Affleck on the fly and, in its trajectory, it’s made clear that the ability to revolutionize industries (in this case, mathematics and the intelligence industry) does not necessarily denote the need to. The potential that Affleck’s Chuckie speaks of and which Van Sant obviously connects to is the potential to do exactly what you feel like and not have to worry about anything else, due to an overwhelming talent. As much as Van Sant might relate to this theme, it’s equally endemic of the then-unrealized potential in both Affleck and Damon, who have yet to write anything else, together or otherwise. Say what you will about Affleck’s choices as compared to Damon’s, they were equally matched in their roles here, and including a pair of honest-to-God catastrophes (Gigli, Jersey Girl), Affleck has rarely been the weakest part of any film he’s appeared in. And now, as a filmmaker himself, Affleck might have found the right avenue for his potential, unlike Will Hunting, who we last see driving out to California, perhaps finally prepared to embrace his own potential.

The detail and saturation afforded Lionsgate’s 1080p/AVC-encoded transfer of Good Will Hunting is a good reminder of how a seemingly modest film can have its precise artistry revealed through a good transfer. Fine detail is superb; check out the clothing and more crowded scenes, such as Will’s gang’s trip to a Harvard bar, to see how the treatment of Jean-Yves Escoffier’s cinematography has advanced between the original DVD transfer and Lionsgate’s transfer. There are some minor issues with crush, but they aren’t diverting, especially considering how well the transfer picks up on Gus Van Sant’s use of light, brighter colors, and the depth of his images. The audio is equally commendable, even if this is one of Van Sant’s less complex films, audio-wise. Dialogue is clear and out front with Elliott Smith tunes, atmosphere noise, and, especially, Danny Elfman’s lovely, restrained score given equal weight in the mix. The balance is quite good, if not a hugely immersive experience. Overall, very good work.

Van Sant, Matt Damon, and Ben Affleck offer a pretty solid audio commentary here, enjoyable and insightful enough, if negligibly light. The writing process is thoroughly covered, as is the casting and pre-production, and Van Sant, never the talkative type, chooses the right areas to focus on. The deleted scenes, with optional commentary, are nice to see in terms of seeing Van Sant’s style and what he likes to capture (an extended St. Paddy’s Day parade sequence was completely cut), but is (rightly) of little consequence to the film itself. The video of Elliott Smith’s excellent “Miss Misery” is nice to see, but the two featurettes and Academy Awards montage are as pointless as you get. A theatrical trailer is also included.

Whether it’s one of his “safe” movies or not, Good Will Hunting has all the strong markings of a Gus Van Sant movie and Lionsgate shows the film requisite care on its Blu-ray transfer.

Review: Friday the 13th: The Ultimate Collection on Paramount DVD