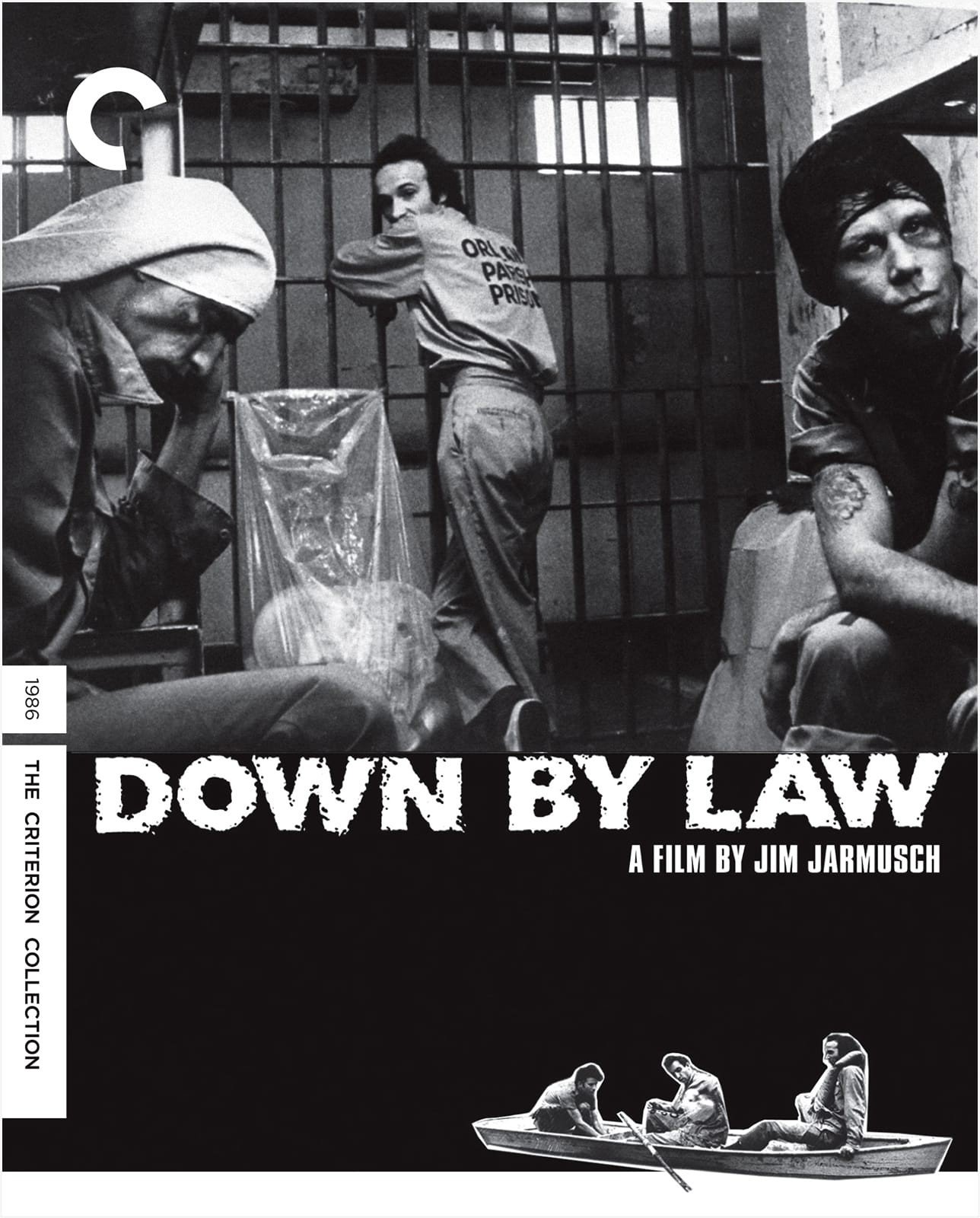 In Jim Jarmusch’s breakthrough film, the flat and homey Stranger Than Paradise, characters drive from NYC to Cleveland and then Florida, only to discover that “you come to someplace new, and everything looks just the same.” Such is the Taoist secret of the drifter, who projects a continuous, wild world around himself to move through; such, too, is the germ of Jarmusch’s filmic tourism, in which western wilderness and urban wasteland alike become futile backdrops for the same seething ironies and clockwork failures. We glimpse these locales as if through the windshield of one of Stranger Than Paradise’s characters, who had just kept right on driving to test the assertion of global sameness above. The result is “traveler’s check” cinema: Jarmusch cashes in the same moral baldness and restrained sense of cool everywhere he goes.

This globe-spanning approach would exhaust itself with the teleporting metro triste-spunk of Night on Earth. But Jarmusch’s third movie, Down by Law, is a much more modest vacation. Divorcing New Orleans from its stereotypes (there’s no ham-fisted Creole dialogue, no digs at the indigenous cuisine), the filmmaker imagines the boiling, boggy city as a purgatory for lost souls, spotted with cinephiliac mold. (The prologue recalls the uneasy relationships in Sam Fuller’s movies; the third act is lifted from Grand Illusion.) The crescent city has been gutted almost entirely of people, and of anything in which those people might take pride; the wet, crumbling streets are virtually empty, aside from the few characters we get to know. These individuals—the pimp, Jack (John Lurie), and the DJ, Zack (Tom Waits)—are also outsiders who’ve burned professional and personal bridges behind them. Their women, smeared with moist light, try to teach them the facts of life (“All you got to do is learn to jerk people off a little!”), but these homilies are rejected. Southern Louisiana, though photographed with such dry, brittle focus, has become their humid prison.

Soon after we meet them, Jack and Zack are conned by enemies, and find themselves bunk buddies in a real prison, though the audience’s experience of the location is confined to a scratch-riddled single cell. The space grows ever more claustrophobic with the addition of a third cellmate, Roberto (Roberto Benigini), an Italian immigrant with a tenuous grasp of English and a penchant for American kitsch, like Robert Frost poems. (When told to “buzz off,” he scribbles the colloquialism down in his notebook, then practices it as a conversation flourish; like Jarmusch’s cinema, he takes everything at interpreted face value, determined to see only what he perceives as the most useful in people.) But Roberto has hidden talents: He’s a murderer (he’s the only one in the film with enough energy to kill), he can rouse the entire cellblock to schoolyard chants, and he knows an escape route out of the parish prison. Jack and Zack follow his lead through a sewer pierced with luminous reflections only to become lost in the nearby swamp. The camera, as though stuck in the mud with them, slowly tracks their progress with the steady, twisting motions of a snake.

This thin plot is fetid with familiarity, yet hard to align with direct antecedents; it’s more haunted by them than influenced. We’re No Angels and Escape from Alcatraz are narratively related but tonally distant; the film reenacts the sultry prison break-by-bayou from Henry Hathaway’s Nevada Smith, though the allusion is frustrated by the aimlessness with which the characters are stricken after liberating themselves. If anything, Down by Law more intently mimics the obsessive nature of Nevada Smith’s protagonist than the particulars of its story; Steve McQueen becomes a vengeful sleeper cell in the title role, infatuated with giving his father’s murderers their due. Jarmusch and his characters are equally determined to either wrench the world to meet their needs and ideals, or retreat into fantasy.

Jarmusch grafts seedy, Manhattan myths onto a live New Orleans matte; Zack, fearful of becoming an alligator’s dinner in the swamp, consoles himself by languidly reporting the weather. Roberto fares even better: The gang stumbles across an Italian restaurant in the middle of nowhere, and the comely expat (Nicoletta Braschi) who runs it becomes titillated by Roberto’s sunny confessions of manslaughter. (“My killer!” she exclaims an hour after meeting him; their lips then wrestle over a table filled with pasta.) The sequence is no more or less oneiric than what’s come before, yet is undeniably a projection of Roberto’s psyche, shared generously with the other characters. The mercy is ironic, finally: After enduring Jarmusch’s private reverie of hell, it’s only fair that the three stumble into a paradise that only the gawkiest of them could have dreamed up.

I’ve now had the good fortune to screen Down by Law on VHS, DVD, projected 35mm, and Blu-ray; predictably, the last heads the pack in terms of pictorial lucidity, but it sacrifices, or simply cannot duplicate, the resonant dreaminess achieved on analog sources. The 1080p transfer is spotless, but somewhat flat and brittle, with each of Robby Müller’s cinematographic shades stuck in place. I miss the zig-zagging haloes of black and white that made seeing the movie on film in a tiny theater in the Bay Area a kind of mass hallucination; it endowed the experience with an unpredictability that complicated the primitive, by-the-numbers plot. I’m no celluloid purist (and there’s a chance, certainly, that the 35mm print I saw had deteriorated to a state outside of the filmmakers’ comfort zones), but this is an instance where format can influence the way one follows the storyline. Criterion’s monaural mix is also spotty; Tom Waits’s soundtrack rattles at high volume while some conversations, particularly early on in the film, are at whisper-strength.

All of the extras are recycled from the DVD, so there’s some standard-definition content that’s suffered upscaling; the interview with Robby Müller and the Cannes press conference, wherein Jarmusch stuns journalists with his laidback non-answers, are quite grainy. (Tom Waits’s “It’s All Right with Me” music video, meanwhile, looks almost menacingly pixelated.) The best stuff is exactly the same as it was on the DVD: the audio recordings of Jarmusch on the phone with the cast, or answering fan’s questions, or just talking about the production. Few illuminating kernels pop up, though I do like the stories about the late-night hotel parties for the crew, wherein Jarmusch would drunkenly hide under Robby Müller’s chair. Luc Sante’s visceral essay provides excellent background on the players, and the 1980s cultural circles they moved within.

A film that puts the noir back in Jean Renoir, Jim Jarmusch’s Down by Law receives an overdue upgrade to high definition with this release.