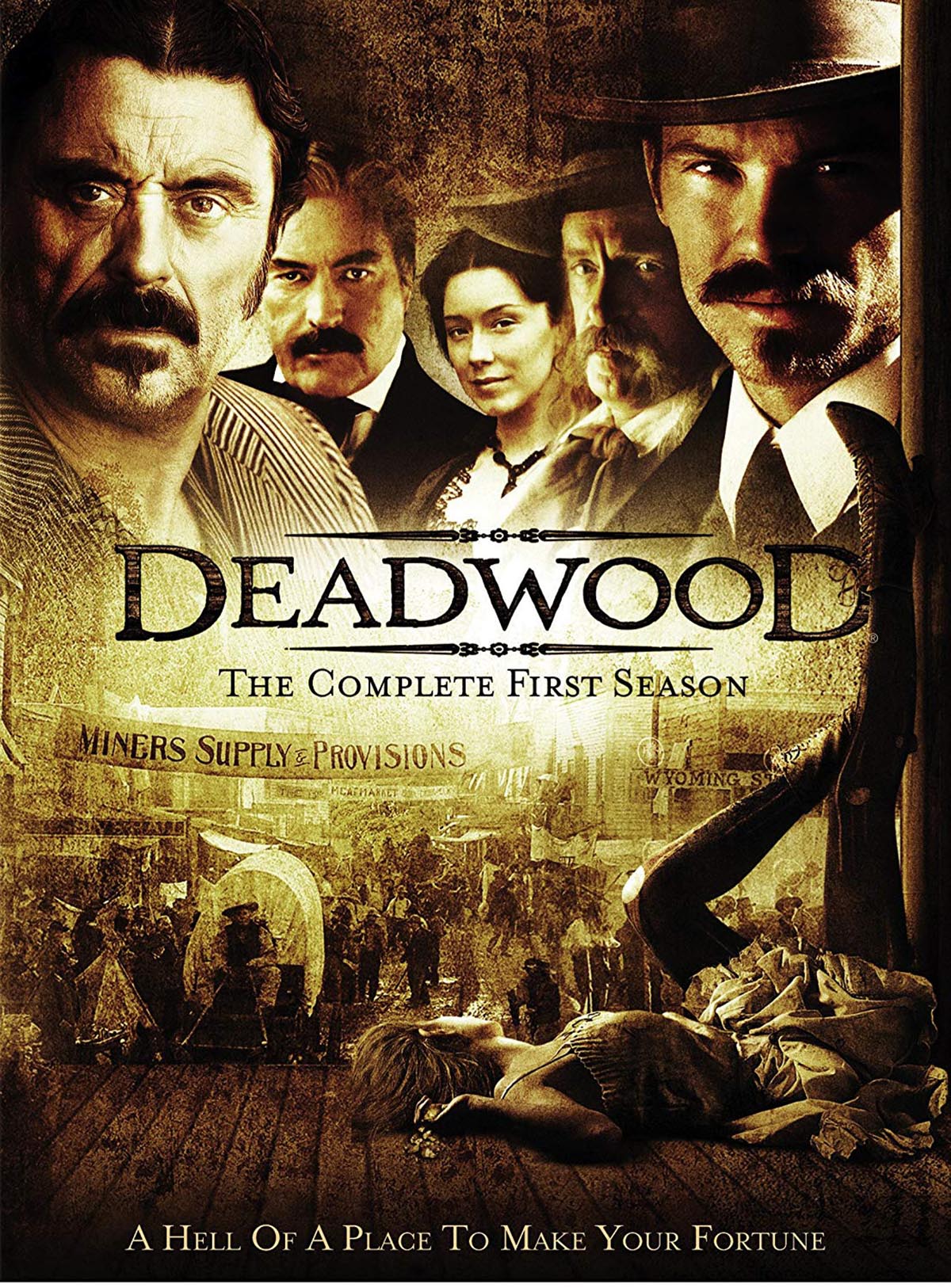 David Milch’s Deadwood begins quite brazenly in the realm of myth, its opening titles a heady amalgam of elemental signifiers that evoke bibilical floods and pagan spirituality—out of this primordial goop arises (via the hellish fires of industry) a turbulent new society bent on the trade of base pleasures for the ever-elusive gold dust of South Dakota’s Black Hills. Into the titular mining town rides former Montana marshal Seth Bullock (Timothy Olyphant) and his partner Sol Star (John Hawkes), their low-key goal to open a hardware business that will capitalize on Deadwood’s steadily increasing population. Bullock’s not one to stay on the sidelines, however, and with the arrival of the famed gunslinger Wild Bill Hickok (Keith Carradine) and his entourage—Calamity Jane (Robin Weigert) and Charlie Utter (Dayton Callie)—the former sheriff becomes more and more entrenched in Deadwood’s shady political underbelly, his primary nemesis the vicious businessman-cum-whorehouse operator Al Swearengen (Ian McShane).

A model of three-act narrative structure, Deadwood’s 12-episode first season is best watched in three four-episode blocks. Milch, the show’s creator and head writer, has his hand in each script and story arc and it shows. Under his watchful eye weaker transitional episodes like “The Trial of Jack McCall” and “No Other Sons or Daughters”—both directed, interestingly enough, by Ed Bianchi, purveyor of that ingenious early-‘80s Lauren Bacall musical/thriller campfest The Fan—are still essential narrative stopovers, rest periods between the initial, momentous Wild Bill storyline and the mid-narrative fallout that follows several characters’ soul-searching comings and goings, finally dovetailing into a finale that manages to be simultaneously bloody and bittersweet.

Boasting one of television’s best ensembles, Deadwood features a variety of faces familiar to the constant filmgoer. Nice as always to see the inimitable Brad Dourif, here cast against type (but with malevolence still firmly intact) as the town physician Doc Cochran. The great William Sanderson finds his ideal role as the rodent-like hotel operator E.B. Farnum, his every movement and line reading a potential, always unpredictable punchline. Powers Boothe, imposing both in name and in stature, brings a touch of insanity-ridden class-consciousness to Cy Tolliver, the town’s upscale brothel proprietor. And McShane proves himself the show’s breakout star as the aptly named Swearengen, whose constant, poetic stream of colorful verbiage (see especially his profane, confessional monologue-during-blowjob in the climactic scene of “Jewel’s Boot Is Made For Walking”) testifies to Deadwood’s confrontational brilliance.

Unlike the more acclaimed HBO series The Sopranos, which too often panders (via its increasingly ineffective psychotherapy framing device) to the middlebrow sentiment that amoral characters are, at heart, so gosh-darn loveable, Deadwood consistently challenges its audience’s prejudices and comforts. My Slant colleague Ed Gonzalez recalled in a recent review a sublime sequence of emotional tension between Swearengen’s cerebral palsy-afflicted servant Jewel (Geri Jewell) and a member of the town’s Asian community, the latter unable to help the former when she collapses in the mud because of a variety of unspoken cultural and social biases. It’s a powerful moment and one that captures the show’s raison d’être in profound microcosm—in Deadwood the town there’s always a clear, divisive line between the haves and have-nots, but Deadwood the show makes it abundantly clear that, from storytelling’s god-like perspective, no one class or group will ever outweigh the other. For this alone, Deadwood’s first season easily earns its place alongside the few masterpieces of the medium with, hopefully (as season two approaches), more greatness to come.

HBO Home Video presents Deadwood – The Complete First Season over six dual-layer discs in its original broadcast ratio of 1.78:1. A terrific transfer overall plagued by sporadic artifacts and pixels during dark interiors, with the show’s primary color-brown-suffering the most. The English 5.1 Surround track is enveloping and expansive, while the three remaining stereo tracks (English, French, and Spanish) offer a pleasing, though distanced, two-dimensional experience. Also provided are optional English closed captions and a choice of English, Spanish, or French subtitles.

The four audio commentaries offered on the set are all worth a listen, the highlight being episode five’s Robin Weigert/Brad Dourif conversation, the nadir being episode one’s David Milch drone. Milch’s track belies his genuinely engrossing presence in disc six’s two-part talk with actor Keith Carradine (“The New Language of the Old West” and “An Imaginative Reality,” respectively). Carradine stays out of the Deadwood creator’s way as he expounds on his career and influences, demonstrating a dizzying intellect and worldly hyperawareness that mark him as a unique and necessary televisual artist. The two featurettes “Making Deadwood” and “The Real Deadwood” take a look at, respectively, the making of the show and the history of the actual mining town. Rounding out the set are individual “Previously On” and “Next On” trailers, all accessible through each episode’s menu selection.

Make your claim on Deadwood: The Complete First Season.

DVD Review: Jules Dassin’s Night and the City on the Criterion Collection