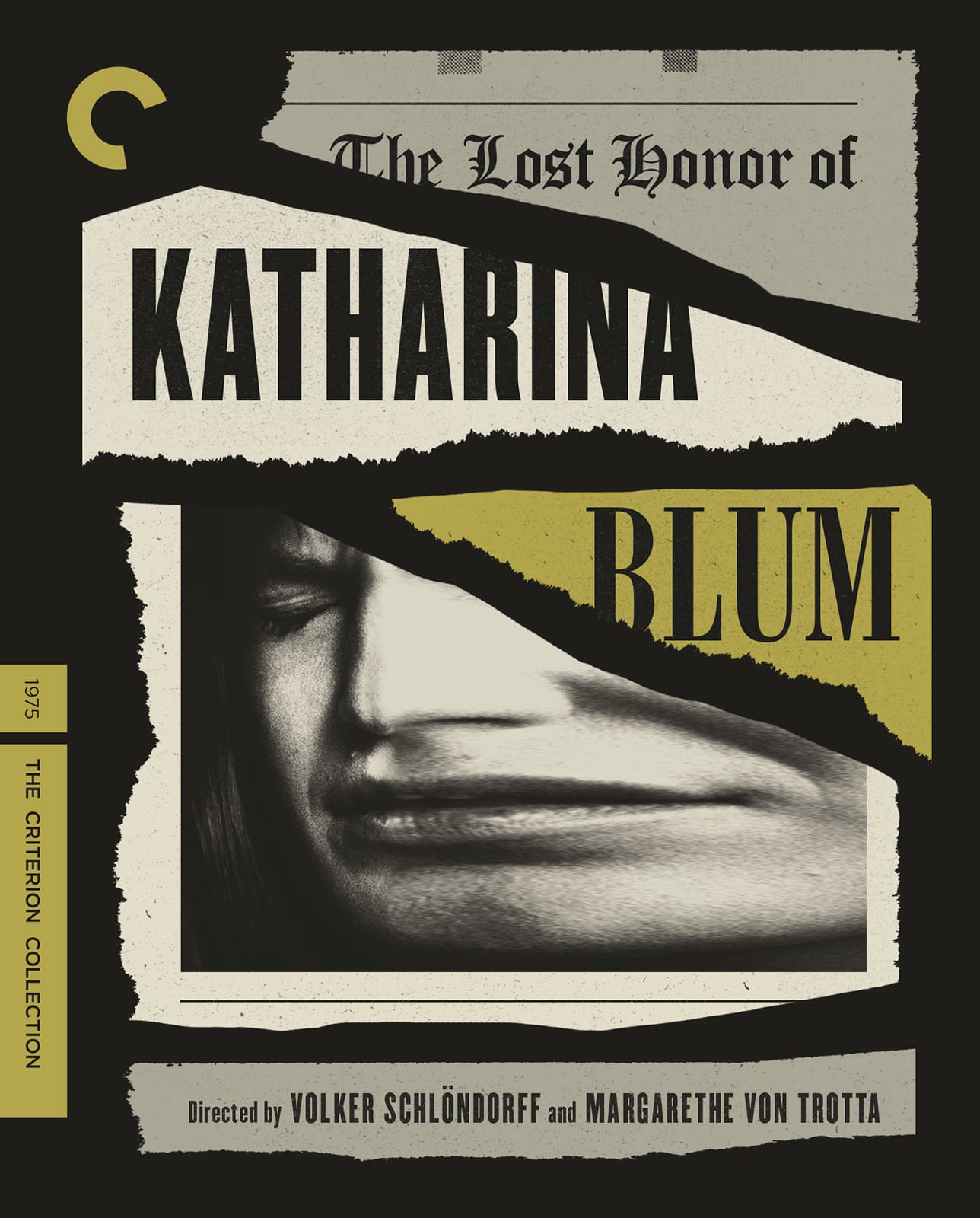 Nobel laureate Heinrich Böll wrote his 1974 novel The Lost Honor of Katharina Blum as a polemic against the German tabloid Bild, which had accused the writer of harboring terrorist sympathies after he publicly opined that the members of the left-wing revolutionary cell Red Army Faction be negotiated with and given due process. At the time, most of the West German population, particularly members of the older generation Böll belonged to, were swept up in the anti-leftist fervor sweeping the Cold War battleground, but the novelist’s views aligned more closely with the former state’s many boomers who saw echoes of the Nazi regime in the government’s crackdown on civil liberties, and in the collusion of the conservative press, which intentionally inflamed fears to sell papers—and urge compliance.

Völker Schlöndorff and Margarethe von Trotta, two young filmmakers who had been involved in the student uprisings of the late 1960s, quickly adapted Böll’s novel about the coordinated destruction of a young, working-class woman’s life after she has a one-night affair with a suspected terrorist. One of the only films of the New German Cinema to turn a profit in its native country, The Lost Honor of Katharina Blum has unfortunately proved to be an evergreen filmic statement about the constraints on individual liberty imposed by the interweaving of state authority and the media’s profit motive under capitalism.

The film might be viewed as part of a broader mid-’70s craze for conspiratorial political thrillers, but, unlike The Parallax View and Three Days of the Condor, it brings the gendered dynamics of modern surveillance regimes to the fore. The morning after Katharina Blum (Angela Winkler) takes suspected radical Ludwig Götten (Jürgen Prochnow) home from a Carnival party, a SWAT-like squad of masked police raid her tiny Cologne apartment like they’re breaching an enemy bunker. The robe-clad Katharina, in the midst of her coffee and morning pastry, is forced to submit to an immediate strip-search, and verbally assaulted with crudely accusatory questions. “That’s not what I would call it,” she quietly but assertively responds when one detective asks her if she and Ludwig had sex the previous night.

There’s a parodic edge to this early scene, in which the armed special forces are clad in bell-bottom jeans and excessively ominous, impractical, padded facemasks with only two tiny slits for eye holes; they rush through the door and flop onto the floor in badly rehearsed action poses. Schlöndorff and von Trotta emphasize the injustice of this violent raid on a woman eating her breakfast, while also undermining the cinema’s tendency to make police raids exciting or cool. It’s in such defiance of conventional spectacle that The Lost Honor of Katharina Blum bears its New German Cinema pedigree: Even though there will be a couple high-speed car stunts later in the film, its most memorable images are slow zooms onto Katharina’s face as the police and media probe her supposedly obscure depths.

The investigation, headed by the burly Kommissar Beizmenne (Mario Adorf), cooks up an elaborate, paranoiac scenario that imputes that the outwardly naïve and innocent Katharina, nicknamed “the Nun” by her friends, has been living a second life as a violent terrorist and de facto prostitute—that her meeting Ludwig at the party was somehow arranged. Meanwhile, the tabloid newspaper Die Zeitung—an overt analogue for Bild—has picked up the story of Katharina’s sensational arrest, and the film parallels the ongoing police interrogation with journalist Werner Tötges’s (Dieter Laser) muckraking “investigation” of the lurid and radical background he invents out of thin air for Katharina. It will turn out that, while the police deny any affinity or responsibility for the lies published in Die Zeitung, Tötges is a regular guest at police HQ, and that he and Beizmenne have developed a friendship of convenience.

Even as it overtly decries the invasive procedures and baseless accusations of the police department and press, the narrative conducts its own investigation into a young woman who does, in fact, have secrets. Characters like Alois Sträubleder (Karl Heinz Vosgerau), the professor with whom Katharina has been having an affair, and Hubert Blorna (Heinz Bennett) are introduced elliptically, the explanation of their relation to Katharina emerging only gradually. To an extent, we begin to share the position of the police, eager to discover whatever we can about a woman’s private life to which, as an audience, we have privileged access. But Schlöndorff and von Trotta don’t evoke such prurience unmediated: They use grainy 8mm footage and closed-circuit video taken by police agents as part of the narration of Katharina’s story, implicating the film itself in this omnipresent network of surveillance.

This outraged and detailed depiction of a society lured into complacency by surveillance—and in particular how surveillance culture facilitates the vile sexual harassment of women, as the police, press, and public are all quick to read Katharina’s body as itself a carrier of dangerous radicalism—ensures the continued relevance of The Lost Honor of Katharina Blum. Today, as in the film’s unforgettable conclusion, corporate media relies on the liberal-democratic discourse of “freedom of the press” to distract from its prioritizing of profit and its frequent collusion with authority (in the name of “access”). In our uncertain times, The Lost Honor of Katharina Blum serves as a reminder that the pillars of the Fourth Estate cannot be not excused from a critique of power, and that they alone cannot be relied on to save us.

This Blu-ray release is marked improvement over Criterion’s 2002 DVD. Crisp, well-defined images lend additional detail and texture to the dystopian production design—the drab gray-blues and pale greens that dominate virtually every environment that Katharina Blum finds herself trapped in—and enhance the film’s documentary-adjacent aesthetic. Shades of black, most prominent in scenes like the nighttime phone conversation between Ludwig and Katharina but also perpetually present in the form of Angela Winkler’s distinctive dark bob, are stable and appropriately uniform. The uncompressed monaural soundtrack exhibits the film’s pared-down but precise aural landscape faultlessly.

Outside of the new transfer and remastered sound and new liner notes by critic Amy Taubin, this release is a true reissue, as the extras are all carried over from Criterion’s earlier DVD. These include an archival interview with Heinrich Böll from 1977, discussion between co-directors Volker Schlöndorff and Margarethe von Trotta, and an interview with cinematographer Jost Vacano. In their interviews, the filmmakers make reference to 9/11, a recent event when the initial DVD was released. Given the way new aspects of the film come to light in the era of Snowden, Manning, Trump, and #MeToo, an updated feature would have been appropriate here. Taubin’s brief essay covers some of this ground, citing The Lost Honor of Katharina Blum’s continued relevance in the age of the surveillance state. The essay also concludes with a sly feminist move: Without dismissing Schlöndorff’s contribution, her final paragraph shows how the film ties closely into von Trotta’s filmography and thematic concerns, not least because of its depiction of female subjectivity in times of political turmoil.

Still the most urgent and probably the most accessible film of the New German Cinema, The Lost Honor of Katharina Blum gets a necessary update, if not a full upgrade, from Criterion.

Pat Brown teaches Film Studies and American Studies in Germany. His writing on film and media has appeared in various scholarly journals and critical anthologies.

Blu-ray Review: America as Seen by a Frenchman Joins the Arrow Academy

The Taste of Tragedy: Douglas Sirk’s All I Desire and There’s Always Tomorrow