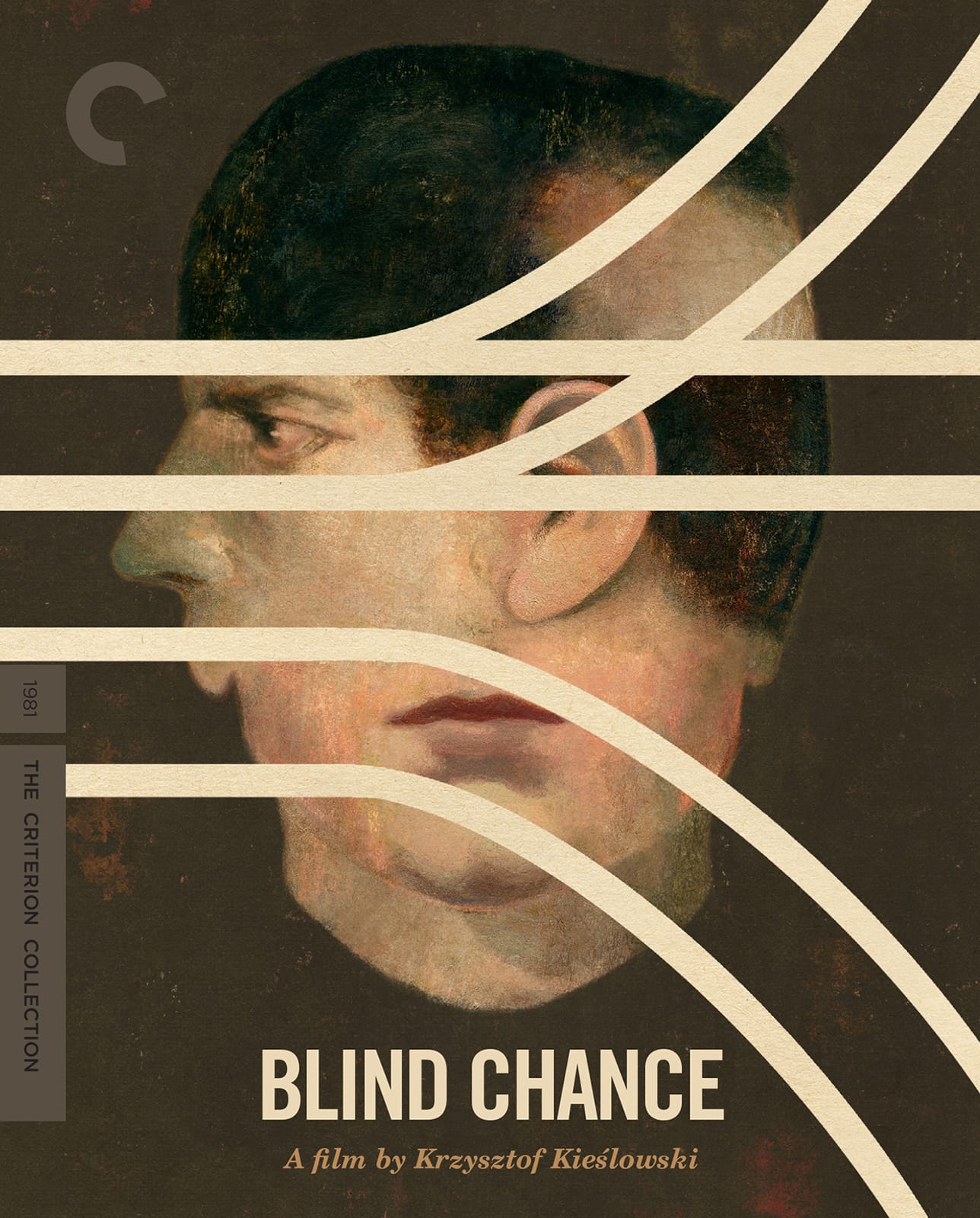 In the beguiling but dense opening minutes of Krzysztof Kieślowski’s Blind Chance, a series of succinct vignettes, arranged chronologically, but not in way that’s immediately apparent as such, introduce us to Witek (Boguslaw Linda), a young Polish man. Strung together by the kind of ethereal theme music that would become a Kieślowski signature throughout the 1990s, various episodes from Witek’s life play out as though the disconnected fragments of a pre-death hallucination. Among other vivid snapshots, he takes math lessons from his father, bids farewell to a childhood companion, peeps through a window as a child at an administrative meeting of some kind, kisses a girlfriend while being heckled by the occupants of a departing cargo train, and participates in an autopsy in a crowded medical room.

Watching this gathering of scenes for the first time, however, the basic context—that these are in fact the details of one man’s life, and not random episodes from a larger cast of characters—proves elusive. Kieślowski employs a peculiar schema in shooting these snippets of dramatic information: In most instances, the camera begins through the eyes of Witek, so that when characters interact with him, they look directly at the lens, and then almost imperceptibly at some midway point through the scene shifts to a third-person perspective, with Linda’s body and face suddenly visible in the frame. Another layer of disorientation is added by Kieślowski’s use of a wide-angle lens (it’s an aesthetic that recurs throughout the film), which renders the out-of-body development that much more immediate and tangible. The effect is of being physically jolted from a position of subjectivity to one of passive observation, from agency to predetermination, from simply being to existing in a larger design.

On a macro level, that’s exactly the shift that transpires repeatedly across Blind Chance’s three-part narrative, the separate stories of which branch off from the moment that concludes this opening movement: Witek, fresh out of a failed sojourn in med school, sprinting to catch a train to Warsaw. Blind Chance dramatizes three possible paths his life could take based on the outcome of this last-second rush. In the first hypothetical route, he just barely clings to the moving train and subsequently meets communist officer Werner (Tadeusz Łomnicki) on board; entranced by the man’s sober teachings, he joins the party himself, and then finds himself conflicted when a chance encounter reconnects him with his first love (Boguslawa Pawelec), who’s now an activist. The second tale finds Witek deflected from his sprint by a policeman—a scuffle that leads to an arrest, community service alongside fellow societal agitators, and finally an attempt to flee from dissent by way of Catholic faith. Kieślowski’s concluding chapter splits the political divide, with Witek starting a family with a fellow student (Monika Gozdzik) and embarking on a medical career after failing to catch up with the train.

That each narrative is influenced so centrally by the political climate of the era—namely, the Soviet Union’s dissolution in the face of widespread policy reform—speaks to Kieślowski’s keen understanding, as a documentarian by trade at this point in this career, of the inescapable personal impact of historical context. Crucial threads are strategically woven through: Witek is twice placed at a performance of politicized folk music, which is first shot at a remove to emphasize his place as a communist monitoring the event, and later, to highlight his sympathetic participation, in close-ups that linger on the faces of the musician and the audience.

In one strikingly underplayed narrative echo, Werner reappears in the second story as a stranger at a train station whom Witek casually asks for directions, a moment that Kieślowski refuses to visually or sonically underline. According to Blind Chance, daily life in Poland in the late ‘70s saw such ubiquitous and overlapping political activity that at any moment a swing on the left-right spectrum was feasible based on whether you walk one way or another. Indeed, Kieślowski and cinematographer Krzysztof Pakulski underscore Witek’s position of vulnerability visually: He’s often seen as a small, immobile foreground figure silently witnessing incidents happening around him, other times as the only character in focus while navigating a new environment.

While this conception of Witek as essentially moldable putty flies in the face of the vast majority of narrative cinema that posits the individual as the primary source of agency, it’s also a rather farfetched idea of mature adult life implemented mainly to justify a narrative structure that, at its core, resembles that of a term paper. (Sure, wildly dissimilar paths in life can be triggered by unforeseen occurrences, but likely not according to such a condensed timeline and after so little personal reckoning.) That said, Blind Chance’s structural rigidity is softened considerably by Kieślowski’s humbling worldview, which stresses appreciation for life’s mysteries even at the failure of our analytical resources.

Serendipity reigns throughout. When, for instance, Witek receives a call that permanently reshapes his future during a moment of quotidian banality with his wife in the third story, it recalls the scene in the first story when his past lover just so happens to pass by him in a park. When human agency is replaced by such cosmic intervention, Kieślowski implies, it’s an occasion to regard with awe. The next steps, however, are a matter of human choice, and it’s the feebleness of Witek’s choices that render him just another cog in the wheel.

By no means offering the bounty of pleasantly hued, soft-focused dreaminess that would mark later Krzysztof Kieślowski features like The Double Life of Veronique and Three Colors, Blind Chance is nonetheless an aesthetic triumph on its own gloomier terms, with predominantly overcast lighting and graceful camera movements from Krzysztof Pakulski. While a digital transfer of such a dimly lit movie could have resulted in the rather unattractive muted quality of the existing set for The Decalogue, the Criterion Collection characteristically produces deep blacks and extracts vibrant patches of color when possible (one yellow foreground element during a church scene takes on a lushness that might otherwise have gone unnoticed). Equally sterling work is done on the multilayered soundtrack, which offers the first example of Kieślowski’s intricate blending of sharp foley effects, atmosphere sounds, and orchestral melodiousness. There’s not much to quibble with here on a purely experiential level.

Polish critic Tadeusz Sobolewski is handed the honors of narrating the video essay that’s become a familiar staple of Criterion’s packages, and his intimate knowledge of perestroika and personal investment in Kieślowski’s body of work are immediately apparent (at one point, he even notes the director’s fondness for “gadgets” and their symbolic place in the fabric of Blind Chance). Elsewhere, in an archival interview, filmmaker and former Kieślowski collaborator Agnieszka Holland offers her own appreciative words for the film she considers the director’s finest and bemoans its commercialized descendant, Sliding Doors, as a rip-off. The standout supplement, however, is an index of scenes tampered with by Polish censors, in which the specifically objectionable fragments are coded in color, while the rest plays out in monochrome. In some cases, a mere phrase of seemingly innocuous dialogue was all that inflamed the authorities, and as such, the supplement powerfully illuminates the often absurd lengths to which communist powers would go to extinguish any signs that the resistance could possibly erode the establishment. A terrific essay by Dennis Lim, which argues for Blind Chance as the “Rosetta Stone to his filmography,” rounds out the fruitful set.

Criterion bolsters their roster of Polish cinema in a triumphant way with Blind Chance, the indelible fulcrum of Krzysztof Kieślowski’s career as a documentarian and his blossoming as a major arthouse auteur.