Composed of just 12 songs, none of which duck under the two-minute mark, Sweating the Plague is a different kind of Guided by Voices album. The band’s 29th effort is expansive rather than fragmentary, creating room for songs to breathe as opposed to smash up against one another. Where last April’s Warp and Woof spit out 24 lo-fi tracks in rapid-fire succession, and January’s double album Zeppelin Over China overwhelmed with a staggering 32 songs, Sweating the Plague gives the impression that frontman Robert Pollard is finally displaying a human-scaled canvas on which to present his work.

From 2012 to 2014, Pollard’s output leaned toward minimalist power-chord crunch in order to fit the endearing looseness of the reunited Guided by Voices lineup from the mid-’90s; under the current lineup, however, Pollard often writes in a complexly anthemic yet no less shambolic vein, as if the Who’s Quadrophenia were reimagined by a beer-fueled garage band. More successful than similar efforts like those from the Doug Gillard era of the late ’90s and early aughts (Universal Truths and Cycles and Earthquake Glue immediately come to mind), this spacious album provides a perfect format for this amalgamation.

Churning out roughly five albums a year, Pollard has frequently been accused of valuing quantity over quality in order to indulge his legendarily superhuman songwriting pace. Yet Sweating the Plague contains fleshed-out realizations of Guided by Voices’s sketches and drafts that have been kicking around for years. “Street Party” repurposes a chiming riff from “The Kissing Life,” an unreleased track dating back to 1998, to wonderful effect, while the Byrds-influenced “Your Cricket Is Rather Unique”—galloping and then soaring in 12/8 time—brings glorious hi-fi life to a demo at least five years old. March assumes vocal duties on the track, in a rare instance of Pollard letting someone else sing his lyrics, and the drummer’s fragile voice makes the cryptic imagery—”Now we’re all unknown/Finding what you’ve sown/Suddenly the eyelids recede”—somehow brim with both sorrow and hope.

Many of Sweating the Plague’s best moments find Guided by Voices in near-prog terrain. While much too power-pop to act as homages to the early Genesis and King Crimson suites Pollard so adores, “The Very Second” and “Tiger on Top” nonetheless contain multiple melodic and structural detours that reveal new dimensions to his craft. “Sons of the Beard,” an album highlight, is inventive and epic in ways Pollard has seldom explored outside of his solo and side-project work. A long, somber, spacey acoustic verse gives way to a rousing electric chorus embellished by fuzzed-out synth glissandos, and before returning to another chorus the band delivers a two-part bridge that climaxes with a towering Gillard solo. That’s an eon of vocal-less instrumentation in GbV-time, but it’s also one of the most astounding feats this latest incarnation of the band has accomplished, a master class in texture, dynamics, and mood.

Not everything rises to this level of greatness, especially “Immortals,” given its pedestrian main riff. And one can’t help but raise an eyebrow at lead single “Heavy Like the World,” which contains a jangly guitar line almost identical to that of “Wormhole” from 1998’s Do the Collapse. But it’s a wonderfully ascendant track, one served well by Travis Harrison’s stellar production and his penchant for bringing March and bassist Mark Shue’s densely pounding rhythm section to the fore. This sound works wonders for the bouncy, chugging “Ego Central High” by discovering a Sabbath-like low end to a riff that would make Cheap Trick proud.

Whether Sweating the Plague initiates a new stylistic phase for this deathless band remains to be seen. While welcome, a more ambitious sound may very well soon make way for another round of succinct instant-classics like the recent “Cohesive Scoops” and “The Rally Boys.” For now, it’s worth appreciating this exciting outlier and a Guided by Voices that can be led triumphantly into uncharted water by its intrepid captain.

Review: Teenage Fanclub’s Endless Arcade Is a Welcome Reminder of Days Gone By

Review: With Mirrored Aztec, Guided by Voices Gets Back to Basics 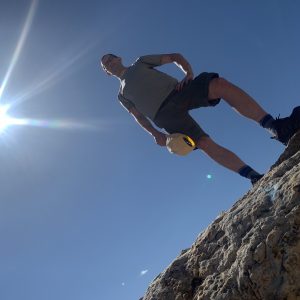