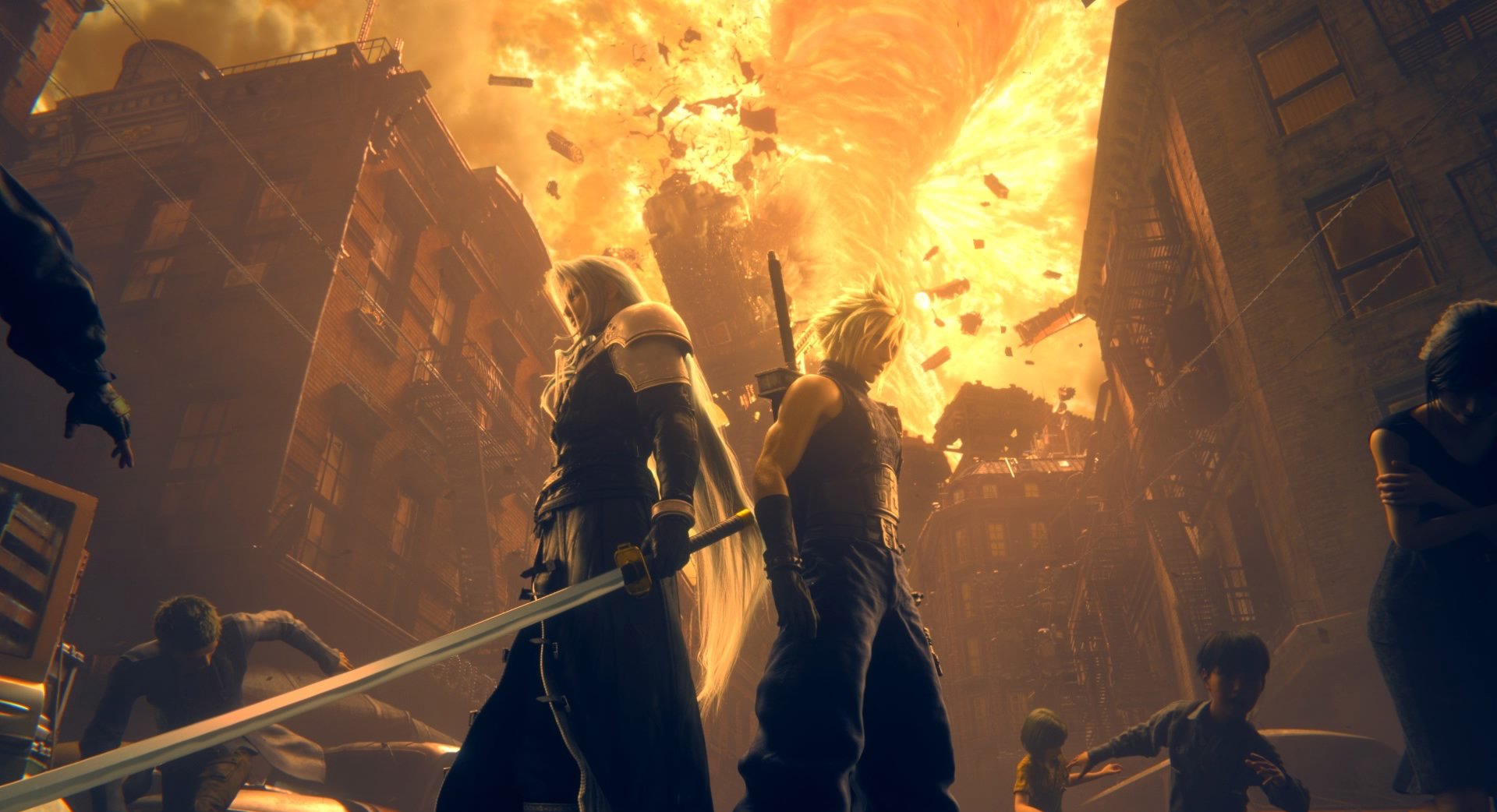 Given the status of Final Fantasy VII, the act of remaking it is one of emotional stewardship. And it’s obvious from the loving and meticulous opening minutes of Final Fantasy VII Remake that the developers at Square Enix were aware of the weight of that task. It’s evident in the first sweeping overture of Nobuo Uematsu’s score and the painstaking photorealism of the neon-green nuclear metropolis of Midgar and its struggling populace, though the setting is still stylized enough to situate the game in the realm of the fantastical and not the uncanny. If only for satisfying basic expectations of being able to return to Midgar in a more extravagant manner, Final Fantasy VII Remake operates on a high plateau of artistic success.

Veterans of Final Fantasy are intimately familiar with the Midgar-centric stretch of this iconic game. They’ve walked through its slums, ridden its trains, and looked over its steel-black industrial cityscape, facing myriad enemies along the way, but until now, only in a low-poly, pre-rendered fashion. Indeed, the Midgar of this remake is astonishingly lived in and tangible in ways that will make your memories of the city in the original game seem like a distant dream. And the grim beauty of Midgar’s environments is richly complemented by the grandiose soundtrack, the original game’s thin, synthesized MIDI instrumentation now supplanted by new orchestral arrangements of several of the score’s most memorable tracks, their motifs remixed and repurposed in order to give the game an even more impressive musical identity across every scene.

The remake’s level of realism also emphasizes the inequality that plagues Midgar. You’ll spend much time in places of extreme poverty that lie below where the upper crust lives, and the game doesn’t flinch when it comes to foregrounding that poverty. If the idea of a megacorporation using massive power plants to literally suck the life out of the planet isn’t enough reason to side with our heroes, who are a ragtag group of eco-terrorists known as Avalanche, it’s impossible not to after seeing how the rich live in blissful opulence while you’ve been traipsing around for hours through slums whose squalor and sickness are rendered here in such vivid detail.

Final Fantasy VII is just as much about a populace caught in a class war as it is about Cloud Strife’s adventures as an ecological mercenary. And the larger events of that story are on every NPC’s lips. They talk of supporting the shutdown of every Shinra reactor, about what will happen when there’s no more electricity flowing through the city as a result. They’re prone to spouting conspiracy theories about everything being a plot by the nation of Wutai—this game’s analogue for real-world East Asia—but they mostly just spend their time trying to figure out how to live normal lives should Cloud and his friends bring their world crashing down.

If all of those details and ideals were garnish in the original game, they’re very much the text of the remake, whose sense of expansiveness is evident right down to its gameplay: battles that thread the needle between the deliberations and patience of turn-based combat and the satisfaction of having real-time control over every aspect of how a character develops and protects themselves across the campaign. Final Fantasy VII Remake’s refined battle system feels like the one that Square Enix has been trying to perfect for two decades. 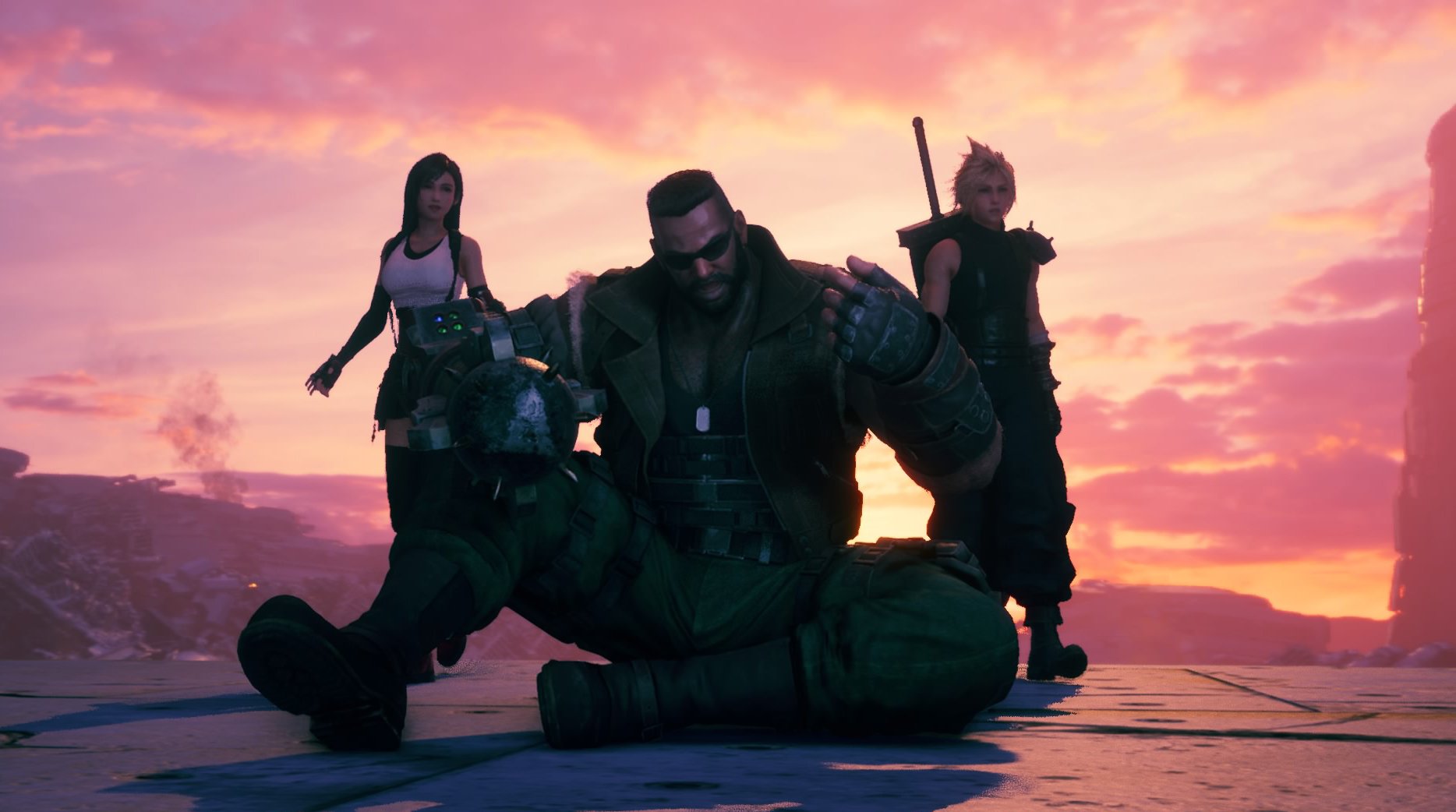 That’s a smaller leap from the original game than how much work went into scene-setting and characterization for the remake. It’s worrisome in the early going to hear one-armed radical Barret Wallace speak. The character by and large suggested an embarrassing Mr. T archetype in the text-based original game, a jive-talking caricature defined by his anger, and now he has a voice that brings to mind Robert Downey Jr.’s character from Tropic Thunder but minus the satirical purpose. Still, that initial misstep weighs less and less on the mind as the game progresses. We come to see how knowledgeable Barret is about the history of his planet, hear him tell of how he was radicalized by the suffering around him, and see him find the exact perfect words to comfort his young daughter before going in to fight the good fight. The remake makes more room for the sort of small, intimate moments that allow these characters to transcend their function as fighters with unique abilities.

This is par for the course for almost every character here with more than one line of dialogue, most notably the lesser Avalanche characters—interchangeable redshirts in the original game who are now endlessly endearing and sympathetic, with their own troubles and unique ways of dealing with their lot in life. But it’s Aerith Gainsborough who probably benefits the most from the game’s newfound depth of characterization. She’s gone from a caricature of your typical JRPG’s kindly chosen girl to a presence of such innate light and charity for everything and everyone in her path. Here, we get to follow her around her hometown across a full chapter, adored by everyone and caring for those less fortunate than her, and for no other reason than the fact that they’re her neighbors and she has the means to. We’re shown, not told, the good person that Aerith is, and we’re given ample opportunity to see why and how she turned out this way. Which makes the very idea of the character walking on the path toward becoming gaming’s most infamous martyr feel all the more wrenching.

That’s assuming, however, that the storyline will even remain faithful to that of the original game. You see, Final Fantasy VII Remake has a subversive card up its sleeve, beginning with the fact that it ends before the midpoint of the original’s campaign. The major through line of Final Fantasy VII, then and now, concerns people juggling what they’re destined to do versus what they can and will do. But that theme feels more resonant in the remake given how it makes that struggle about whether destiny even matters in a universe where anything is possible. Throughout, visions of the future and past haunt the player, with Aerith often reminding the other characters that their fates are in their hands, that they have the choice to will the events of the original game into reality—or not. No longer can Cloud afford to be a dispassionate drifter through as much of his own story as he was in the original. He can possibly create a better world by guarding himself against future failures, even if straying off the beaten path gives Sephiroth another chance to achieve his goals.

Ultimately, the game is directly in dialogue with the player about what a remake can and probably should be, about how much of a waste it might be to proceed past the endpoint of this particular story—essentially the moment in the original where you’re allowed to freely explore the world outside Midgar—and realize that the journey and the outcome has remained the same. You’re given the chance to choose a different path, to face a literal hideous embodiment of the hands of fate in the game’s climax. It’s a forceful, kinetic statement—that this remake should not be bound by what we already know. And as monstrous as it can be, the symbolism of that gesture is incredibly daring. The game flips the script on the very idea of nostalgia being the only guiding creative force behind a remake, making it another enemy to be slain. The final hours of this game constitute an extraordinary act of subversion, actively challenging us through gameplay to expect more.

It’s not that the developers at Square Enix don’t care what Final Fantasy fans think—quite the opposite, given how hopelessly devoted to certain aspects of the original game this remake is—it’s that they believe there are more riches to be mined from this material. And if we can embrace what Final Fantasy VII Remake is doing, even while it plays havoc on our expectations, perhaps we’d be willing to pull on this thread a little further. Aerith literally extends her hand to an adventurer willing to take a wild leap into boundless unknown freedom late in this game. There are so many reasons to take her up on that offer now.