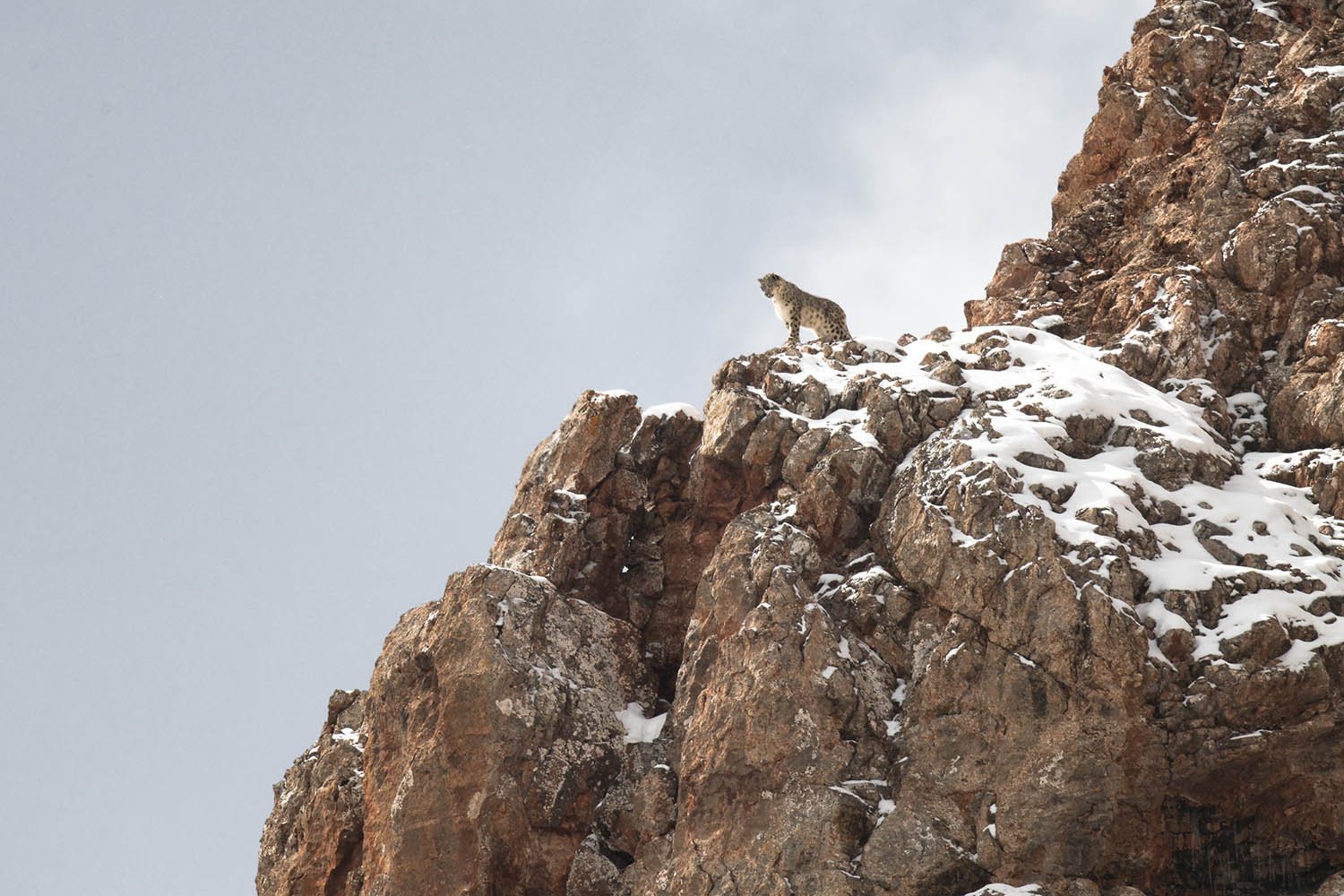 Recent nature documentaries have tended to be either solemn, sometimes almost mournful contemplations of non-human life or inspiring tales of an exceptional human’s symbiosis with nature. Marie Amiguet and Vincent Munier’s The Velvet Queen splits the difference, combining patiently observed footage of animals living in their natural habitat with the story of two men seeking an escape to a prelapsarian state of being.

These wanderers are Munier, a photographer, and the writer Sylvain Tesson, who are searching the Tibetan mountains and steppes for the rare snow leopard. Theirs is a quest that adds narrative thrust to the film’s portrait of a unique and visually striking landscape, as well as paves the way for some not always welcome pontification from its human subjects.

The Velvet Queen is about distance, in both literal and metaphorical terms: the space that the filmmakers have to keep between themselves and the wild animals that they observe, as well as the seemingly unfathomable distance between humans and animals. Using long, telephoto lenses, Muriel captures candid shots of herds and individual animals isolated amid the rusty browns of the Tibetan plateau and the craggy, gray mountains of the Himalayan mountains. In one of his most remarkable extreme shots, we only gradually realize that a moving herd of bovine are actually under attack from a pack of wolves. This serves as our introduction to merciless unpredictability of life in this relatively untouched area of the world.

Setting their remarkable imagery to an ambient score by Warren Ellis and Nick Cave, the filmmakers evoke the radical, inscrutable alterity of animal life. But rather than let this imagery speak for itself, Amiguet and Munier accompany it with musings by Tesson, whom Munier has promised a rarified glimpse of the snow leopard. Tesson’s narration wallows in its own lyricism, describing at one point his proposal of the leopard-sighting quest with the line “For me, a dream—for him, a rendezvous.” And elsewhere he states: “Prehistory wept, and each tear was a yak.” Admittedly, extracting such lines from the film transforms them somewhat—as they go from merely pretentious to borderline laughable—but in context, too, they strive to supplement images that wouldn’t seem to need any commentary.

The desire to churn poetry out of natural vistas doesn’t necessarily offend in itself, but both Tesson’s written compositions and the conversation between him and Munier often lapse into clichés about the distractions and decadence of modern society. Both men repeat myths about the tragedy of humankind’s separation from nature. Tesson, for example, laments humans having been at some unfortunate point “expelled” from a land “where beasts, humans, and gods converse.” This myth of a fall from natural innocence, of nature as a separate sphere that holds the key to the lost unity of self and world, is certainly a familiar idealization, but one that seems all the more crass in such a self-consciously artful documentary.

Aside from these needling weaknesses in the conceptual framework, long stretches of The Velvet Queen are simply mesmerizing. The cameras that we see Tesson and Munier repeatedly setting up, as well as the one that we never see them set up (that is, the one with which someone, presumably Amiguet, is filming them do so), transport the viewer to a landscape pregnant with secrets. At one point, Munier recounts a previous episode in which he believed that he lost track of a leopard, only to discover while developing photos taken that day that it had been hiding, camouflaged among the rocks, watching him the entire time.

This anecdote conveys in condensed form what ends up being the documentary’s main takeaway, which is somewhat at odds with the principals’ repeatedly professed romanticism. According to The Velvet Queen, the world is full of wonders staring us right in the face, and perhaps what’s needed to perceive them, rather than an escape to a different realm from which we’ve been “expelled,” is a more patient look at what’s already there.

The Great Film Performances of 2021