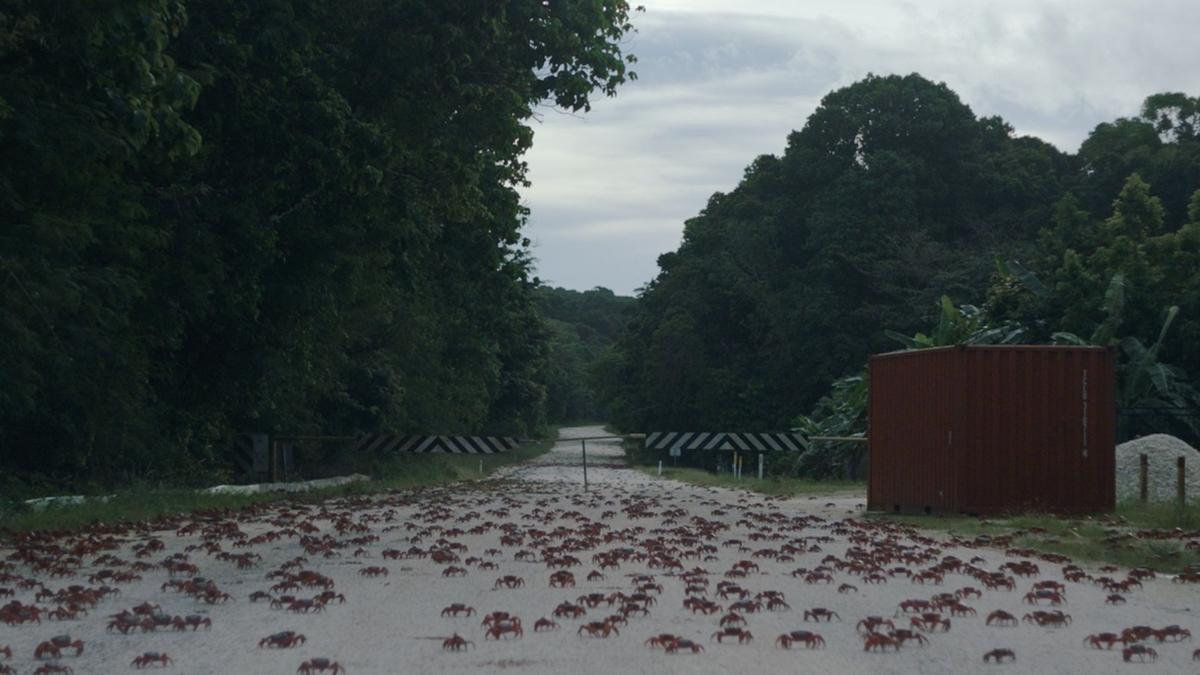 Sometimes a metaphor is necessarily, unavoidably blunt. Case in point: the many shots in Gabrielle Brady’s documentary Island of the Hungry Ghosts that regard, from a measured distance, masses of migratory red crabs making their way toward the ocean across concrete roads. The setting is the Australian territory of Christmas Island, which has a population of just under 2,000 people and has become a haven for asylum seekers. Throughout the film, Brady stitches together images of the red crabs’ late-fall migration to the sea with snapshots of the life and work of trauma specialist Poh Lin Lee, offering up a haunting portrait of the island as a purgatorial realm between the poles of isolation and liberation.

The film begins with a man running and howling through the jungle, in a brief sequence that, while conspicuously staged, simply and urgently conveys the hauntedness of this place. The man’s distress is that of all “hungry ghosts,” spirits who must be appeased with various rituals, in accordance with the belief of islanders. And we get most of that in the abstract, through chants and mesmeric dolly shots through Christmas Island’s jungles. Brady withholds contextual information at almost every turn, about everything from the islanders’ beliefs to how their home became a desirable destination for refugees. Her caginess at times yields fastidiousness, but there’s no doubt that she doesn’t condescend to her audience, understanding that some things must speak for themselves or they’ll lose their totemic power.

There’s a mighty sense throughout Island of the Hungry Ghosts of how the people of Christmas Island are inextricably bound to the countless red crabs in their midst. In an early scene, national park rangers use fallen tree limbs as makeshift bridges, so that smaller crabs can more easily get out of the ditches that bound the island’s roads. Later, as Poh Lin and her family walk through a lightly forested area, her French husband encounters one of the crustaceans, which can live more than 70 years, and wonders if the hole in its back is the result of a skirmish with another crab. Poh Lin’s daughter may be distracted by the creature’s black eye, but the young girl, either guided by instinct or her father’s lead, maybe both, knows that to lightly nudge the creature to the side of the trail is to save it from further harm.

Brady then rhymes this act of kindness with Poh Lin’s almost ritualistic work with the migrants who are being held at a detention center that’s been plagued by various controversies over the last few years. Poh Lin uses a tableau of sand and small toy figures to help one woman process her trauma, poetically describing the grains of sand as mountains that have been reduced to their finest form, but mostly she just listens, and listens, and listens. She’s a willing sponge for their guilt, at one point moving over to sit next to and comfort the Syrian man who weeps as he remembers the various separations that have plagued his young life. It comes as no surprise to subsequently learn that Poh Lin is also in therapy.

Island of the Hungry Ghosts is braided together from seemingly countless threads, from the ubiquity of the English language as a vestige of colonialism to how the livelihood of migrants is at the mercy of unknowable decision-makers. But more than anything, it’s an uncanny articulation of how the surest route to empathy is letting oneself be haunted by a place. In the film’s most hypnotic shot, Michael Latham’s camera scales a craggy stretch of beach, in awe of all its textures, before a wave sends a massive splash of water into the air, its sound consuming the soundtrack. Then, Poh Lin’s husband is heard reading their daughter a story: “I’m going to fly around the island spitting water everywhere and the water is going to stay along the shore. It will burst out of rocks to protect Christmas Island from humans.” On this remote island, to be transfixed by legend is to withstand our oblivion for just a little while longer.

Review: I’m Not Here Lacks Decisiveness But Is Perceptive About Alcoholism