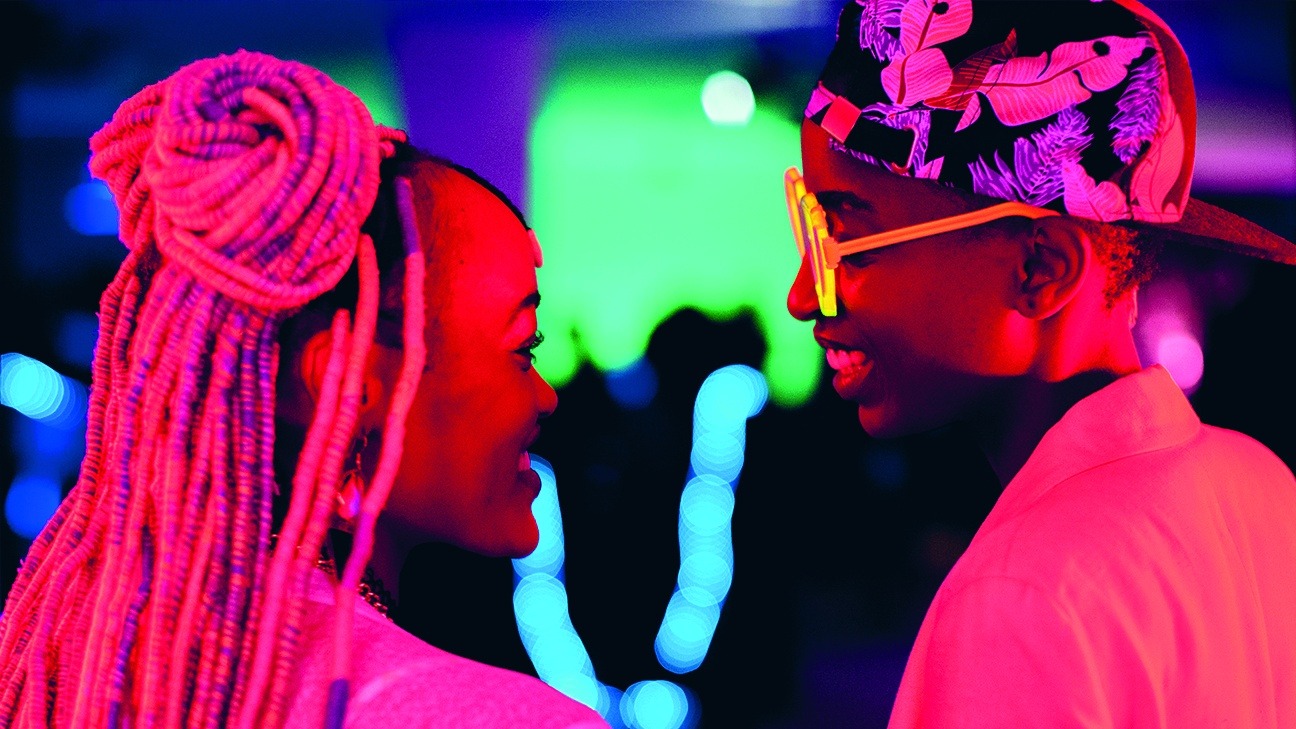 Wanuri Kahiu’s Rafiki is a salvo in an ongoing cultural war in Kenya over the rights of LGBTQ people, and as such, it’s difficult, and maybe even irresponsible, to judge the film in a vacuum. Homosexuality is illegal in Kenya—punishable with up to 14 years in prison—and Kahiu’s film is officially banned in the country, though that ban was temporarily lifted for a week last fall so that it might qualify for an Oscar nomination. As a romantic drama, Rafiki turns out to be conventional in most senses except that its star-crossed lovers are two women—but then, particularly in Kenya, that makes all the difference.

Rafiki’s radicalism, hardly evident in its form or narrative structure, becomes more apparent when the film is situated in the context of state censorship and socio-culturally dominant homophobia. Adapted by Kahiu and co-writer Jenna Cato Bass from a short story by Monica Arac de Nyeko, the film takes its cue from that most over-alluded-to of romantic texts, Romeo and Juliet, complete with feuding families, illicit liaisons, and impossible love.

Kena (Samantha Mugatsia) and Ziki (Sheila Munyiva) are the daughters of two small-business magnates opposing each other in an upcoming city council election. They live on the outskirts of Nairobi, in an area characters refer to as Slopes, which Kaihu presents as a relatively secluded community. The story plays out over a limited number of distinctive locations—such as the church that Kena and Ziki’s families attend and consists of a purple-clad Anglican preacher leading sermons under a purple tent and a food stand where the young denizens of Slopes eat, with its nearby van on blocks where Kena and Ziki can have some privacy.

As young romantics are wont to do, the two women fall in love despite the immense familial and social pressure to avoid anything of the kind. And in addition to the mutual animosity of their respective families, they have the stigma that homosexuality carries among their friends to worry about. Kena hangs out with a pair of hypermasculine guys who routinely hurl epithets at the taciturn man everyone in the neighborhood knows is gay; when Ziki’s clique of friends start suspecting Kena is her lover, they react with a surprising outburst of violence. With its handful of locations and its small cast, Rafiki emphasizes the inescapable social gaze this queer couple is subjected to: The supporting characters are liable to pop up in any given place, making anywhere but the abandoned van a potentially threatening space for the two women.

In a country in which homosexuality is seen by a majority of the population as imported Western decadence, the audacity of the film’s assertion of a queer African identity shouldn’t be overlooked. Rafiki announces its intent with defiant opening credits, streaked with spray-painted neon colors and blasting feminist African hip-hop. But this rebellious energy also dissipates rapidly after the credits: While Christopher Wessels’s cinematography is drawn to saturated colors that recall the punkish animation of the credits, there’s a staid quality to the film that belies the intensity of the visuals. Major scenes play out with characters summarizing their feelings in sketchy dialogue, as when Kena’s mother (Nini Wacera) exposits Kenyan women’s motivations for being more homophobic than men in the midst of an argument.

While Kahiu proved herself a visionary filmmaker with her 2009 short film Pumzi, her visual ideas here are often sentimental short cuts: slow-motion close-ups of a smiling Ziki to suggest the character’s sexual longing for Kena, and slow-motion shots of birds in flight to symbolize the couple’s desire for freedom. Ziki herself, with her flashy, colorful braids and broadly sketched character arc, is little more than a romantic fantasy—and perhaps purposefully, as Kena is clearly the main character, drawn to Ziki at least in part because of her distinctive look. But it seems odd that a romance about two women should recapitulate a structure in which only one of the pair—the one in the position of looking—gets a full character arc. Regardless, Rafiki’s slotting of two African women into this familiar romantic structure represents a radical and important upending of contemporary Kenyan sexual mores.

Review: The Half-Baked Under the Silver Lake Is in Love with the Image of Itself