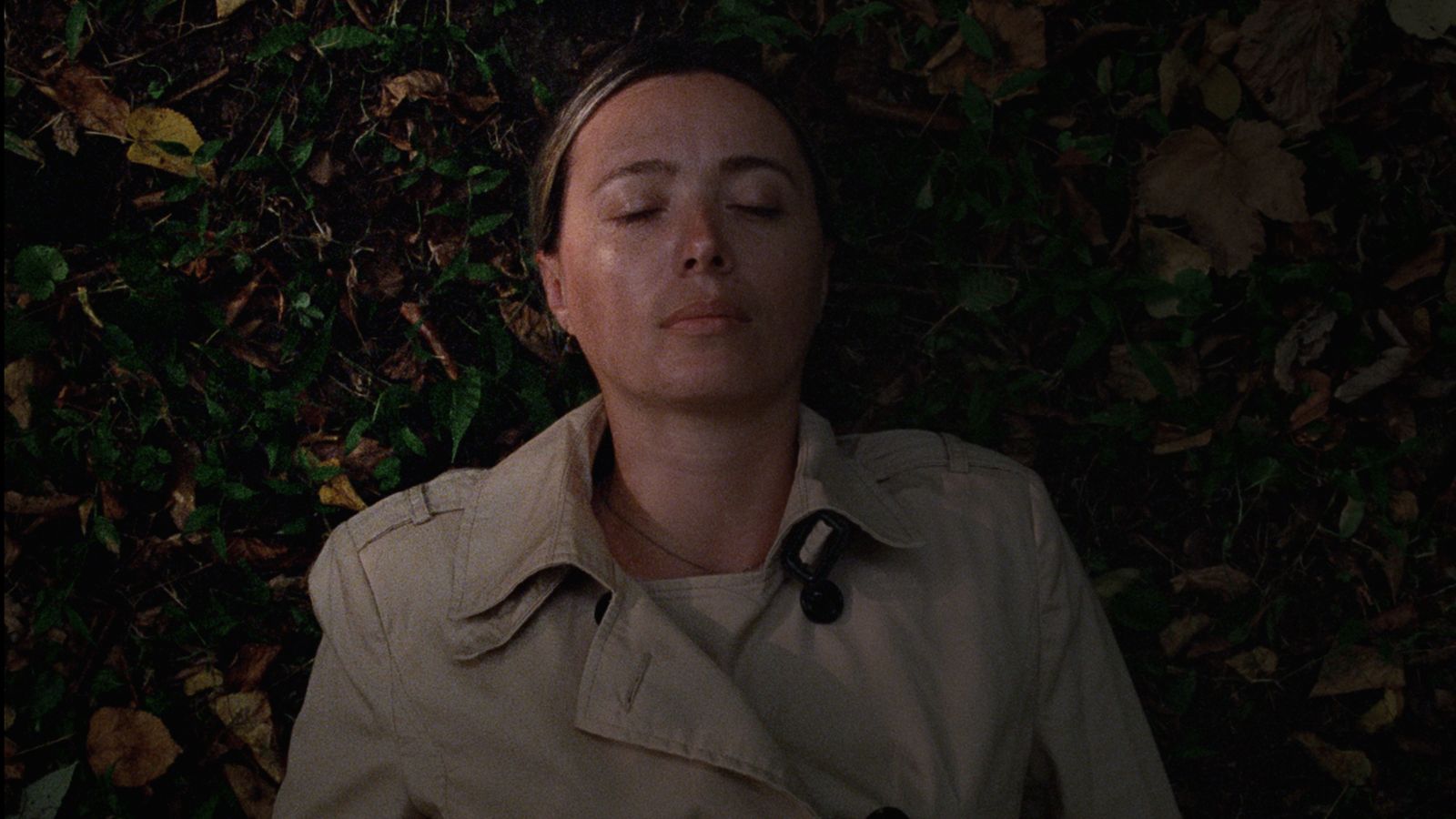 Dea Kulumbegashvili’s Beginning centers around a Jehovah’s Witness missionary, Yana (Ia Sukhitashvili), who lives with her husband, David (Rati Oneli), and young son in a remote village in the mountains outside of Tbilisi. The close-knit community they tend to faces extreme prejudice and persecution from the local Orthodox Christian majority, as illustrated in the film’s startling opening. After seeing and hearing nothing for a minute or so, except the sound of a woman whispering, apparently in prayer, we glimpse congregants entering a small chapel. A sermon plays out in a static, unbroken shot from the rear of the room, before being interrupted by petrol bombs thrown through the chapel’s doors, eventually sending the building up in flames. Abruptly transitioning from reflective, communal peace to shock and panic, the scene casts a long shadow over the subsequent events, suffusing even the calmest, most intimate scenes with a sense of uncertainty and tension.

The attack also functions as an indirect representation of the senseless violence at the core of the Old Testament story of Isaac, which is the passage being discussed by the congregation before they’re forced to flee. Foreshadowing another shocking event late in the film, one that shows the imperceptible force of religious scripture weighing on the characters, this blurring of boundaries between spiritual imagination and reality reveals itself to be a key theme of the narrative. As the children of the community learn Bible stories and verses in preparation for their upcoming baptism ceremony, their carefree attitude and weak grasp of the basics of their religion is contrasted with the heavy moral burden that Yana and her husband have placed upon themselves. As seriously as Beginning treats their faith, we’re also given a sense of the apparent futility of their mission, and the sacrifices they have made for it.

The aftermath of the burning of the chapel leads to more personal trauma for Yana, who faces an uphill struggle against various abuses of power, institutional failures, and societal prejudice, while seeking a new purpose in life and trying to stay true to her religious convictions. Holding together many of the film’s long, often dialogue-free scenes is an impressive performance by Sukhitashvili, who balances vulnerability with a kind of opaque self-possession, never allowing us to grasp the full extent of Yana’s motivations. As traumatized as the woman is by what befalls her and her community, she also appears frustrated by her victimization, by her husband’s inaction in the face of injustice, and by her own diminished prospects since she abandoned her former career as an aspiring actress. A visit to her mother also reveals a family history of male neglect, which is a particular type of behavior that she apparently feels obliged to overcome by whatever means necessary.

Though a strictly minimalist approach means that her visual motifs emerge organically from the action, Kulumbegashvili makes a few unexpected, rather Hanekian compositional choices that break with the film’s sense of naturalism to more explicitly wring allegorical significance from certain sequences. Early on, Beginning introduces its main antagonist, an unnamed detective played by Kakha Kintsurashvili, in the extreme foreground, appearing unexpectedly from the right of the frame after a nighttime shot of the still-smoldering church fire gradually goes out of focus. He then walks off toward the fire raging in the distant background as Yana’s son and the other local children curiously follow him. The eerie religious symbolism here is subtle enough to keep the film grounded in the material world, while still hinting at an undercurrent of spirituality and superstition beneath its austere surface.

The low-key, serene natural beauty of Beginning’s setting provides a counterpoint to the often-disturbing events of the film, most obviously in one extended scene of a rape whose sounds are completely drowned out by the gentle burbling of the river shallows where it takes place. The idea of a god whose silence both challenges and affirms religious faith is driven home forcefully here. Indeed, the sensorial environment that Kulumbegashvili builds with a rich, naturalistic sound design, as well as the feeling of stasis created by the film’s glacial pacing, could qualify it as an example of what Paul Schrader has referred to as the “transcendental style.” And though Beginning is a lot less ostentatious than Schrader’s First Reformed, it does share that film’s intense focus, and a central theme of faith being tested. Both even conclude with a surprising tonal shift, accompanying a pivot in their protagonists’ behavior from a tightly controlled precision toward a mystical catharsis.

The introduction of a kind of magic realism at the end of Beginning is simultaneously jarring and strangely logical, following from its ambient mood of quiet spiritual intensity and haunting dread. A harrowing final narrative development is left ambiguous and unresolved by Kulumbegashvili, after which the filmmaker abruptly cuts to an uncanny sequence in which holy retribution seems to be delivered by the landscape itself. Demonstrating the extent of Yana’s resilience in facing the most extreme and personal tests of faith, and her willingness to sacrifice everything for her community, Kulumbegashvili vividly imagines powerlessness and despair being transformed into a supernatural, redemptive force.