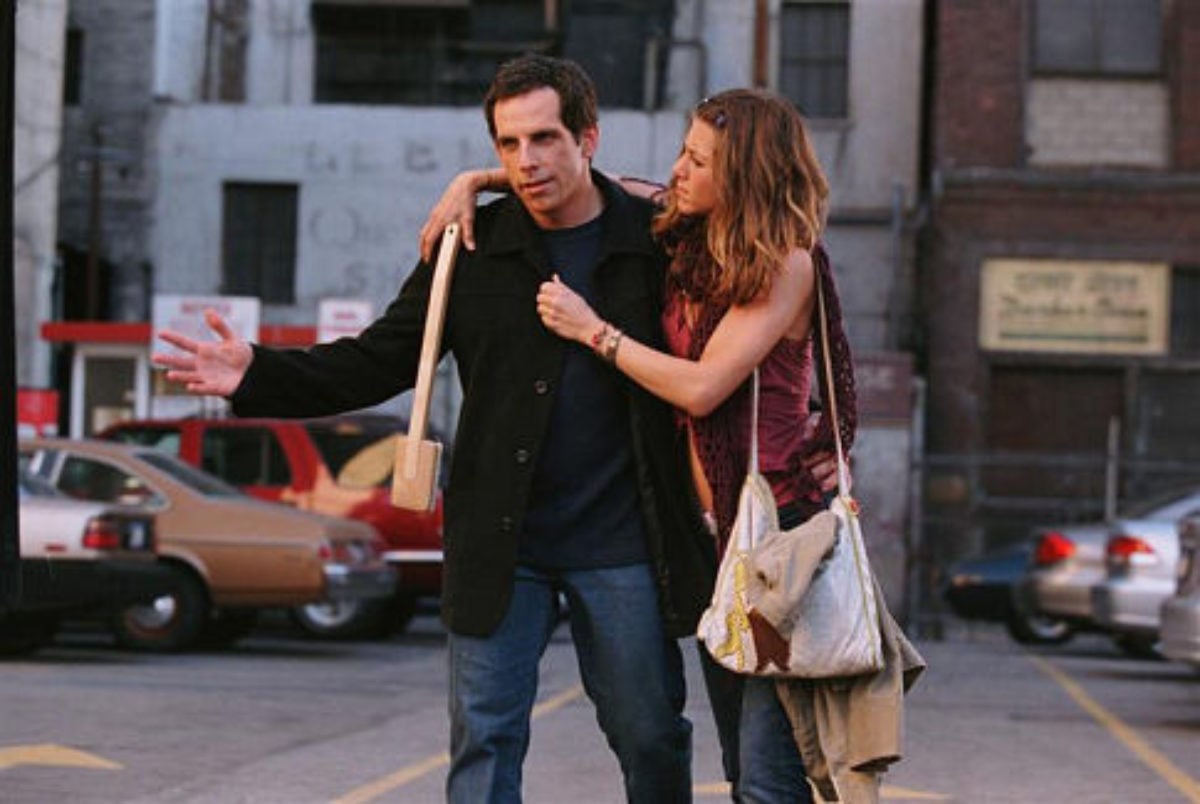 Having grown up an orphan and eventually sold at a flea market in Italy, Rodolfo the ferret now lives a rather privileged life, bouncing around from Austin to Istanbul to, finally, a quaint studio apartment somewhere in downtown Manhattan with his owner Polly Prince (Jennifer Aniston). The fuzzy, sweater-wearing fellow’s life is turned upside-down when Polly meets Rueben Feffer (Ben Stiller), a married risk assessment analyst whose wife, Lisa (Debra Messing), is so enthralled by the giant penis of her scuba instructor (a creepily strapping Hank Azaria, doing a very unfunny variation of his characters from The Birdcage and America’s Sweethearts), that she sleeps with him on the couple’s honeymoon. Rodolfo, who is almost completely blind, must endure a series of hijinks courtesy of Rueben, who has Irritable Bowel Syndrome, threatens to use him as toilet paper, wipes his ass instead with a floral-printed towel embroidered by Polly’s grandmother, and uses Polly’s brand new $150 luffa-sponge-on-a-stick to plunge the inevitably clogged toilet. Despite reported on-set quarrels (Rodolfo allegedly bit Stiller on the chin and, according to Aniston, she and the fuzzy ferret didn’t get along), Rodolfo and Stiller share a surprising abundance of on-screen chemistry. Not since that famous tussle with Cameron Diaz’s dog in There’s Something About Mary has Stiller connected so agreeably with a costar. Stiller’s chemistry with Aniston ain’t bad, either. In fact, Rodolfo’s supporting cast often steals the show. Philip Seymour Hoffman chews the scenery as Sandy Lyle, a repulsive has-been actor and a sorry excuse for a best friend, while Aniston, who is setting the soundstage for a prosperous post-Friends film career, is believable as a wishy-washy, on-the-go 30-something with commitment phobia. In a scene torn straight from an episode of Friends (“The One with the List”), Polly discovers a risk assessment list Rueben has compiled on his computer to decide whether or not to reconcile with his slutty wife, and alas, Rueben and Polly realize that opposites do attract and live happily ever after. But it’s Rodolfo who truly carries the film, blindly slamming into walls and garbage cans just when the romantic comedy doldrums threaten to turn Along Came Polly into a by-the-numbers bore.