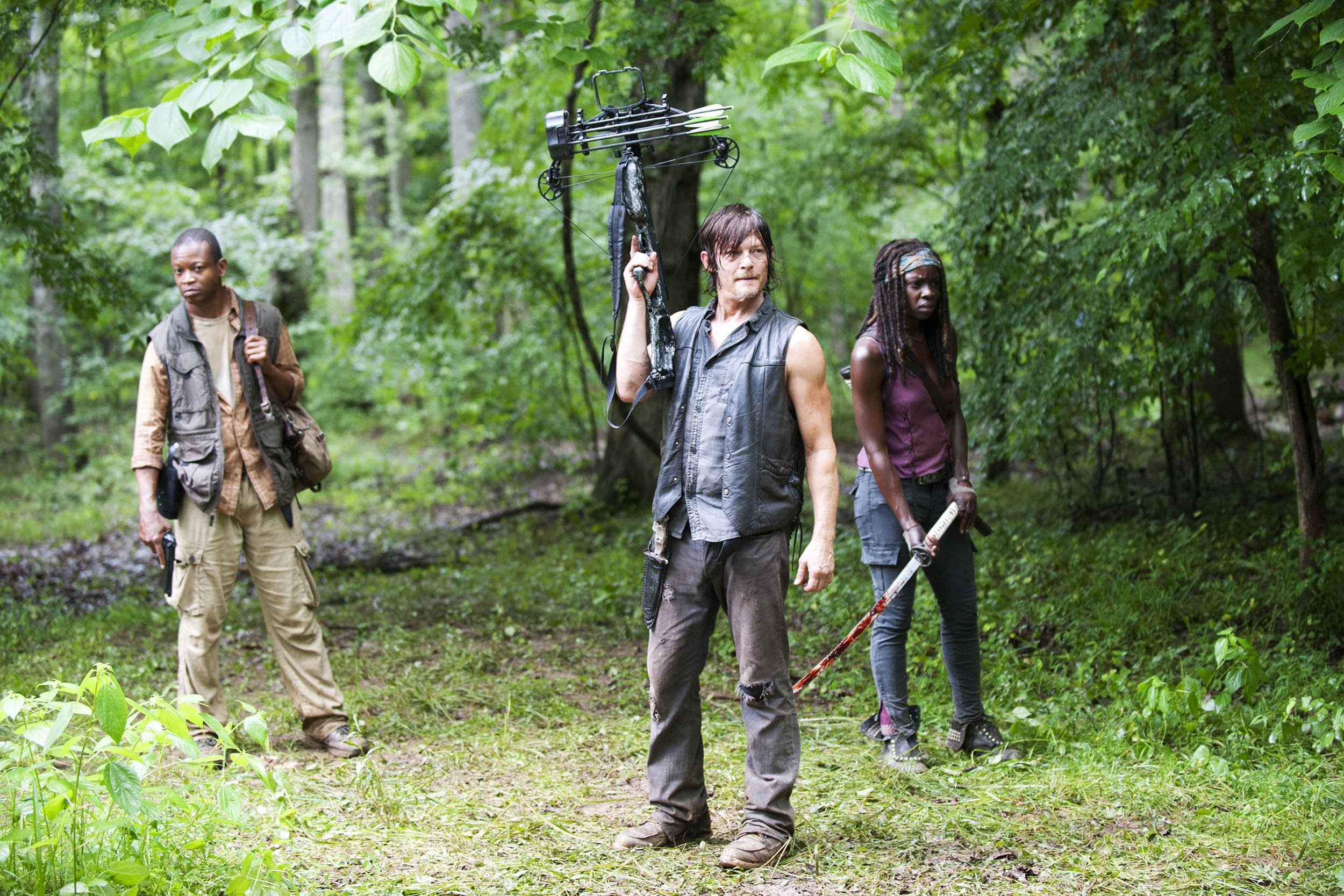 “If it’s walkers, if it’s people…we can do something, we can fight. But with this I’m just digging graves,” Glen (Steven Yeun) says to Hershel (Scott Wilson) early in the latest episode of The Walking Dead. But beyond his frustration with the group’s rapidly worsening situation, Glen is articulating a collective sense of futility that’s spreading through the community nearly as fast as the deadly disease that’s infected so many of its members.

“Isolation” lacks the overarching structure that many episodes of The Walking Dead exhibit. Staving off big action and story developments until the very end, the episode quietly explores the differences in how everyone reacts to what is arguably the most desperate situation the group has ever faced. With the prison essentially on lockdown to prevent further spread of disease, tensions are running high among some members of the group. Between Tyrese’s (Chad L. Coleman) violent flare-up, Rick’s (Andrew Lincoln) retaliation, and Carol’s (Melissa McBride) angry outburst when no one is around, the environment at the prison is increasingly volatile. Making matters worse is that the non-quarantine group continues to grow thinner, with Glen and Sasha (Sonequa Martin-Green) starting to show symptoms.

One of the more noteworthy elements of “Isolation” is that it’s not nearly as Rick-centric as most episodes. Series creator and executive producer Robert Kirkman wrote the episode, and rather than focusing on any one idea or character, he breaks up the characters and sets them down very different (but equally uncertain) paths. Arguably the most prominent character in the episode is Hershel, whose decision to risk his own life to try to help the infected should come as no surprise. He is, after all, the most Spock-like character in the series, often serving as Rick’s main advisor and spiritual guide for the group. Whether his plant-based remedy can help is likely a long shot, but remains to be seen.

Hershel isn’t the only one possibly going rogue though. Carol’s (Melissa McBride) bombshell revelation in the episode’s final moments will no doubt shake the stability of the prison group even further. Her intentions appear to be no different than Hershel’s, but her casual admission to murder is in itself strange, particularly since it’s not in line with what he know about her character. It’s possible, then, that she’s covering up for someone else. Whether she’s actually responsible for the two charred bodies that Tyrese discovered in the previous episode or lying to protect someone else, her mental state is ever more fragile, based on her emotional turmoil and unpredictable actions throughout the episode.

If the show’s past history is any indication, we can predict with reasonable confidence that Carol, Hershel, and possibly Glen may soon meet their end, given the focus they receive in this episode. One thing that’s certain is that the prison community now stands at the brink of chaos, not only from the threat of the disease, but based on the current outlook of Daryl (Norman Reedus) and Michonne’s (Danai Gurira) mission to find medicine, there’s little hope that those who are sick will get the treatment they need.

While the cliffhangers of Carol’s revelation and Daryl and Michonne’s desperate situation in the woods leave much to anticipate going forward, Kirkman also seems to be planting some finer details that may become more significant in due time. For example, Beth’s emotionless assertions to Maggie (Lauren Cohan) that “we don’t get to get upset” and that everyone has a job may suggest that her own isolation is taking its toll. This coupled with her history of suicidal tendencies makes it difficult to believe that something deeper isn’t stirring inside her, particularly given how her responsibilities have been limited to caring for baby Judith. Another interesting tidbit is Daryl and Michonne’s exchange regarding the “trail that went cold,” presumably one leading to David Morrissey’s Governor, who’s yet to show his face this season.

Working mostly to set up future events and conflicts, “Isolation” is not especially memorable within the scope of The Walking Dead’s larger narrative mosaic. Nevertheless, the unsettling undercurrents and the overall heightened abandon with which the characters are acting has given the show an unnerving tone that it’s previously lacked. Moreover, that the series so far this season has ostensibly served as prelude to imminent chaos rather an epic showdown has greatly deepened its potency.