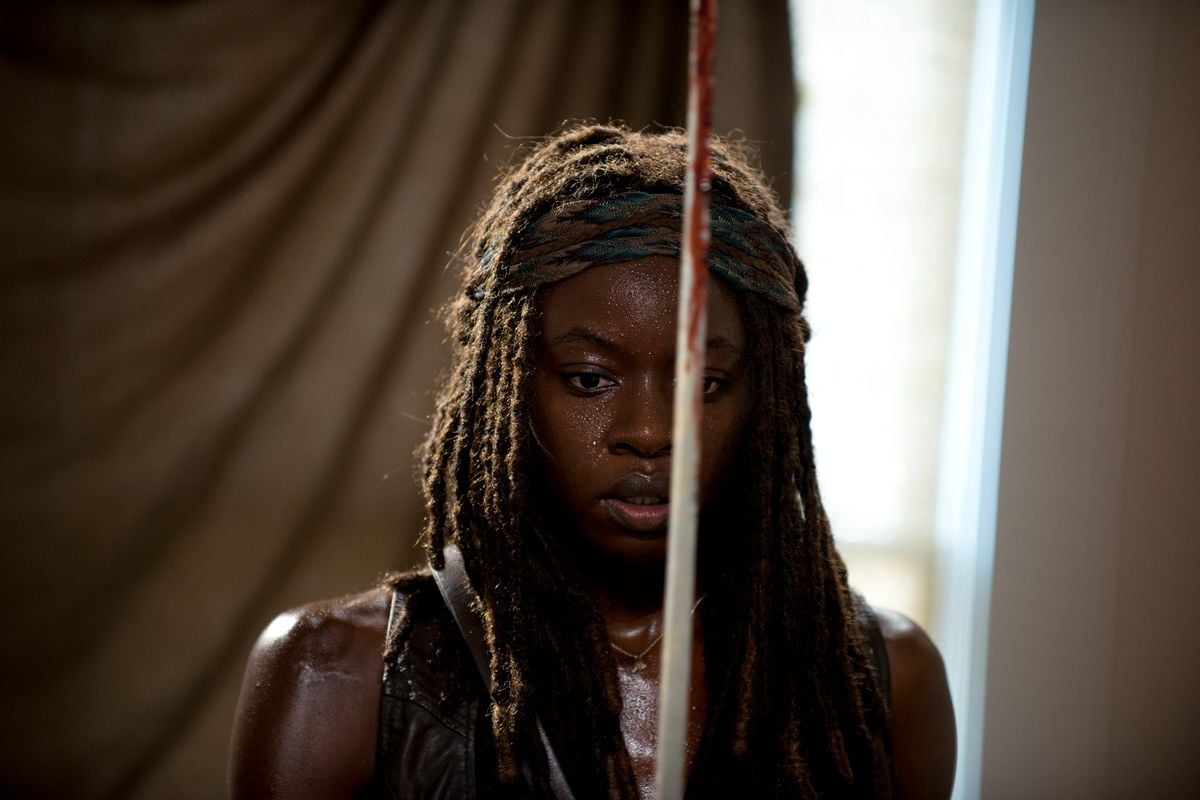 Are you feeling down in the dumps? Maybe it’s because, in the one week since The Walking Dead delivered Glenn back to us, the recaps for “Heads Up”—and their accompanying comments sections—have suggested that it’s lonely out there for anyone who feels the show’s trolling of audiences was more than just a dubiously executed PR strategy. You may be thinking how it’s possible that anyone could have thought that Glenn had reached his expiration date given how all the breadcrumbs dropped at our feet pointed to the contrary. (Even the admittedly cheap gaming of the show’s credits was a sign.) Maybe you also feel that the audience’s anxieties were too pointedly being wrapped into the narrative fiber of almost every episode since “Thank You” for Glenn’s prognosis to have been anything but good. If so, then you probably also believe that the show’s writers, in getting us so hot under the collar, thought they could sneak by us all the stock narrative contrivances leading up to this mid-season finale.

On that note, there was a sense that the tower crashing through a portion of the wall that surrounds the safe-zone was going to be a way for Glenn (Steven Yeun) to return to Maggie (Lauren Cohan) in the heat of a zombie invasion that would allow them little time for a heart to heart. That, at least, would have been in sync, and perfectly so, with how briefly the series memorialized our relief over Glenn’s reemergence last week before it quickly got down to business. But expectations have a way of being deceiving in the world of The Walking Dead. Outside Alexandria, Glenn further works on Enid (Katelyn Nacon), trying to convince her that, in spite of this latest calamity to befall their community, there’s still hope for their group of survivors and, in turn, humanity at large. By the end of the episode, there’s no reunion between Glenn and Maggie, only a shot of the former staring at the latter from a distance, frozen as he stares over a piece of wall and no doubt wonders if there will ever be a reunion at all.

Last week’s episode also promised a bloodbath, which didn’t quite come to fruition as audiences might have similarly expected, and in ways at once rewarding and frustrating. Given that this is a mid-season finale, the barbarians must invade the gates, and so the zombie horde is seen pouring into Alexandria. In the end, though, the single casualty is Deanna (Tovah Feldshuh), who’s bitten as she and Rick (Andrew Lincoln) fend off zombies before running into and holing themselves inside Jessie’s (Alexandra Breckenridge) home. By the end, she makes peace with her life, even imparting sage wisdom to Michonne (Danai Gurira) about simply being better than the person she is today. Michonne wants to take Deanna out of her misery, but Alexandria’s leader isn’t ready, and though she says she’ll take her own life, she chooses to do so as a hero: by firing at the line of zombies that charge toward her inside the room where she somewhat comically went into in order to say goodbye to Rick’s daughter, baby Judith.

The episode has its indelible images, from the ants that scurry into Sam’s (Major Dodson) room to devour a plate of uneaten food, a throwaway moment that points to just how long he’s made himself a prisoner on this floor of his mother’s house, to Maggie, narrowly escaping death, climbing a ladder to an elevated platform, glancing at the sky and to the green balloons that she took to be a sign of Glenn’s survival in “Heads Up.” Just as elegantly, at least structurally, is the episode’s insistence on staying almost entirely inside, focusing on how the zombie horde’s invasion forces the safe-zone’s denizens into tight corners in which moral dilemmas pan out. Pity, though, that said dilemmas are so expectedly heavy-handed as to be depressing.

Carol (Melissa McBride), suffering from a possible concussion, stumbles upon the Wolf who Morgan (Lennie James) has been keeping safe in one of Alexandria’s buildings, and who Denise (Merritt Wever) tends to after gauging that he isn’t suffering from a zombie bite. Once the four are in the same room, a quasi-Mexican standoff is kicked into motion that works as a metaphor for America’s complicated relationship to torture. But the talents of these actors, easily the show’s finest, are such that one doesn’t quite recoil from the obviousness of the scenario. At least in comparison to the situation that plays inside the garage where Eugene (Josh McDermitt), Rosita (Christian Serratos), and Tara (Alanna Masterson) find themselves. As the women discuss if their time at Alexandria has reached its expiration date, Eugene reads from a world history book, which is framed with a bluntness that’s beyond condescending to audiences.

“Heads Up” culminated with multiple cliffhangers. “Start to Finish” both answers everything and nothing at all, perhaps understandably given its title, which brings to mind the logic of a möbius strip. Ron (Austin Abrams) doesn’t do to Carl (Chandler Riggs) what might justify the latter’s long and mangy head of hair, at least not yet. Jessie convinces Sam, whose anxiety is played throughout for almost comic dividends as a near-cosmic melodrama, to grow a pair, but for how long? As the entire group walks out of Jessie’s house, zombie guts strewn all over their bodies (one is reminded here, again, how awesomely effective this conceit is, and how little it’s regurgitated), Sam starts to make the sort of noise that could get them into serious struggle. And then it all ends, and for two months the audience is left frustrated by the sense that almost everything in the world of The Walking Dead comes down to a table-setting maneuver. In one of the unlikeliest moves of the show’s run, “Start to Finish” completely pushes pathos to the sidelines.