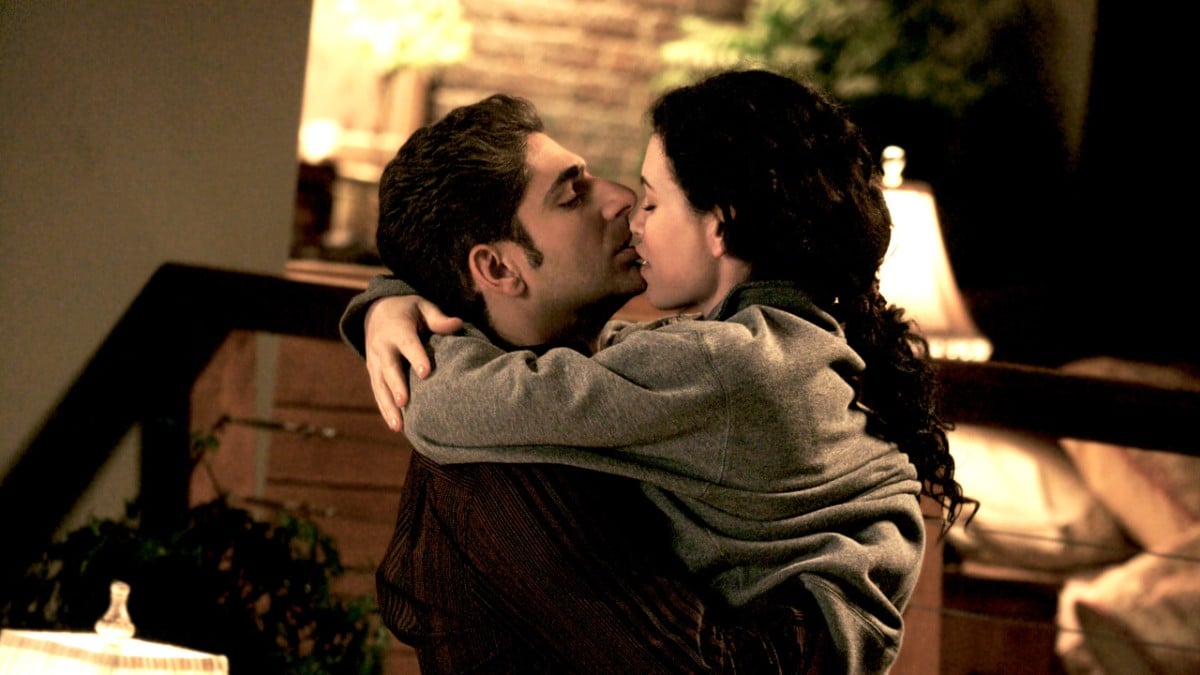 Not with a bang…not even a whimper…it was more like a wet fart. The sloppiest, most depressingly anti-climatic Sopranos episode yet also suffered the grave misfortune of being the season finale—or is that mid-season finale? Whatever you want to call it—“Kaisha” was hardly the kind of hour that’s going to leave folks looking forward to the final eight episodes next year.

Appallingly edited, the show lurched in fits and starts from Thanksgiving to Christmas, with a massive amount of screen-time devoted to Christopher falling off the wagon yet again, this time in the company of Julianna Marguiles’ hotcha real estate broker—a gal who can apparently slide from herbal tea to smoking H in the space of one abrupt cut. Their relationship was an out-of-nowhere development—the sort of thing the show used to let play out over several weeks, instead of just dropping in our laps as an oversized confusing flashback.

Such time warping also proved problematic as we saw Phil Leotardo receive a clean bill of health from his doctor, and then walk into the same hospital suffering a coronary immediately thereafter. Was this going backwards too, like the earlier Chris and Julianna stuff?

I guess not. After a riotous sit-down with Ray Abruzzo’s malapropism-prone Dubya stand-in, Little Carmine Lupertazzi, it certainly looked like we were finally headed for the New York/New Jersey dust-up that’s been simmering ever since Season Four—but Phil’s heart attack may (or may not) have put a pause on those hostilities.

Meanwhile, whiny, petulant AJ miraculously transformed overnight into a responsible grown man, doing well at his new construction gig, using his smarts to avoid a physical conflict, landing a gorgeous girlfriend, and rebuking his father’s lifestyle all in one fell swoop. (When Tony wondered aloud why his son didn’t use his connections to get a break on an expensive piece of jewelry, “I have a job” was the kid’s cutting reply.) Again, like the Chris and Julianna subplot, this was a giant Big Gulp worth of character development that should have grown organically over a span of weeks—not mere minutes.

Though the story-points were unforgivably rushed, “Kaisha” still somehow felt slow and enervated. After Agent Harris was nice enough to drop by Satriale’s pork store and mention the threat of retaliation from Phil’s Brooklyn crew on “somebody close to Tony” (suddenly the F.B.I. is tipping off gangsters?) the rest of the running time cruelly teased us by following Christopher in and out of his car and on his way to restaurants—the kind of narratively useless shots you usually only see on this show right before somebody gets whacked.

The threat of violence hung over the episode like a dark cloud, and when all was said and done—nothing happened. There was no resolution to anything that’s happened all year, just a sense of festering unease. I understand that the bummer rhythms of this season have been a ploy by Chase to show the sad, emptiness of these people’s lives—but with “Kaisha,” The Sopranos finally became just as sad and empty as the characters it chronicles. After five brilliant, forceful headlong episodes at the start of the season, the program has slowly drifted into stasis.

Furthermore, after all this mucking about, we’re pretty much right back to where we were at the end of Season Five. Okay, so maybe the kids have left the nest, but Carmela’s Parisian epiphany seems to have been for naught. With the spec house back up and going, she’s once again bought and paid for. Tony’s back to most of his old tricks. Save for that surprisingly heartfelt monologue at Phil’s bedside (this hour’s lone moment of excellence) it’s almost as if his life-altering experience never happened. His Melfi session this week had already been covered, practically verbatim, in season three’s “Amour Fou.” Chris is still stuck in a boring loop of self-destruction and recovery. New York and New Jersey are still teetering on the brink… as they have been for years now. So what exactly happened that made this season so necessary?

The Christmas gathering in the final scene was almost too excruciating to watch, and not just because we had to see James Gandolfini in a beret. It was just such a hollow celebration—a bunch of miserable, depressed people half-heartedly pretending to be full of holiday cheer.

Of course, come January I’ll be tuning in to see what happens next. But for the first time in the history of the show, I can’t say that I’m excited about it.

Deadweek: The Wordsmith’s Credo, or A Portrait of A.W. Merrick