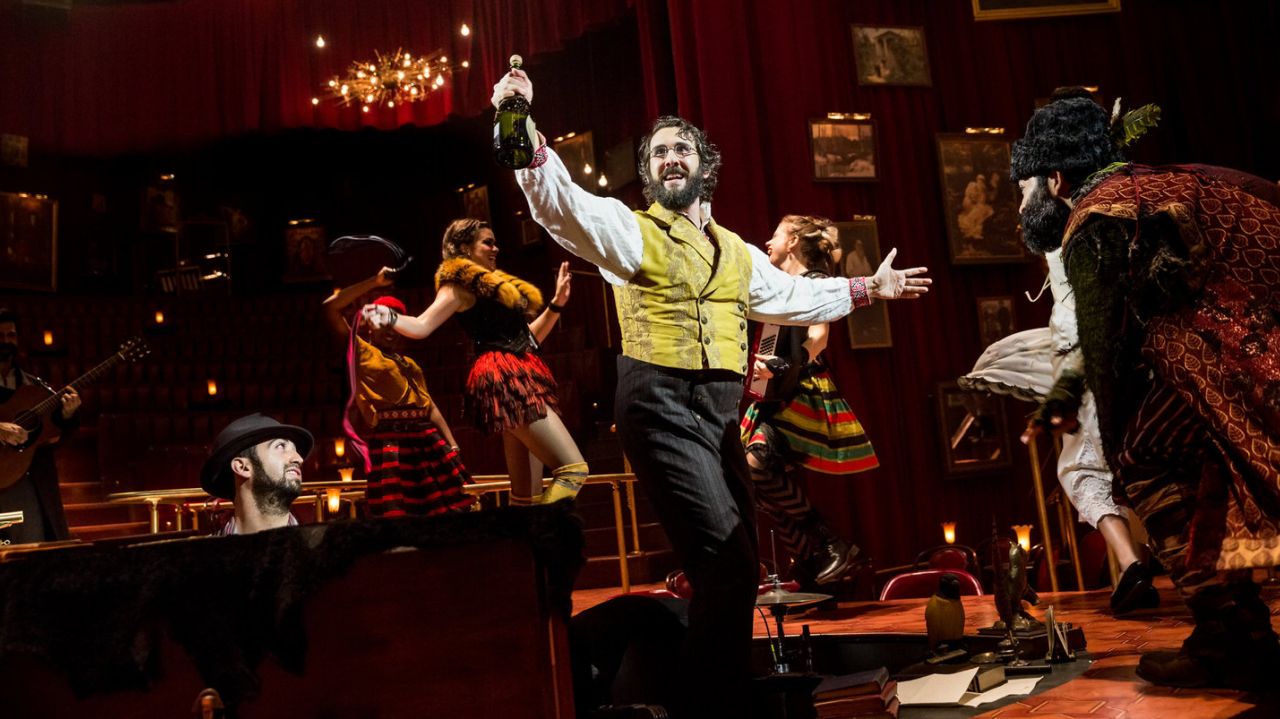 I’ve never seen a Broadway theater look like the Imperial does now. For Natasha, Pierre & the Great Comet of 1812, a catchy, silly and profound new(ish) musical, the 45th Street playhouse has been reimagined by set designer Mimi Lien as a lavish nightclub, in Metropolitan Opera style: There’s lots of red plush and Sputnik chandeliers—what you wish Tatiana’s in Brighton Beach looked like. It’s also multitiered, with stadium and counter seating, four-seaters, and end tables in the orchestra seats, all cut through with runway stages. There are at least three bars just in the orchestra.

This production recreates the spirit of the unique layout of the show’s Off Broadway runs, which were hosted for four years in small downtown theaters and a custom-built popup venue in the Meatpacking District. The biggest difference in the move to Broadway isn’t the scale of the production, the price of the ticket, or the demographics of the audience; it’s that Pierre, once originated by the show’s creator, is now played by a big star, adult-contemporary singer Josh Groban, making his Broadway debut.

Although Pierre’s name appears in the title, and he’s the show’s moral and spiritual center, his role is small—that is, until he intervenes toward the end in the fallout of a discovered affair. Groban spends most of Act I in the pit, drinking stage wine, playing the piano, and shooting exasperated looks at the characters. The part, though, has been expanded somewhat now with “Dust and Ashes,” and it’s a true showstopper, an earnest soliloquy in the great tradition of Rodgers and Hammerstein’s “Soliloquy,” from Carousel, not in sheer inventiveness, but in its novelistic interiority; it’s a lengthy introspective reckoning at the end of which, after a slow but epic musical buildup, the character comes out with new motivations, moving the plot forward.

That plot comes from Leo Tolstoy. Composer and librettist Dave Malloy adapted Part II Book 5 of War and Peace, about 80 pages long in Ann Dunnigan’s American translation. Though it’s set during the Napoleonic Wars, the scenes take place away from the front, in the relative peace of decadent Moscow, though its characters often feel at war: Natasha is engaged to Andrey, who’s off in battle, and while waiting for him falls for the rakish Anatole, with whom she has an affair. Their plans to elope are upended, however, and she’s disgraced. There’s a lot of yelling.

After one gets comfortable with the character dynamics, The Great Comet of 1812’s plot is plain and familiar enough, though it takes a little work to get to that point. The “Prologue” introduces the backstory and personalities, each with a Homeric epithet: “Hélène is a slut,” “Anatole is hot,” “Marya is old-school,” “Sonya is good,” and “Natasha is young.” But all of that information is also printed in a “family tree” in the playbill, and if you haven’t studied your Tolstoy before arriving, the cast, wandering through the audience before the start of the show, suggests you review a little. So does the “Prologue”:

“Gonna have to study up a little bit
If you wanna keep with the plot,
Cuz it’s a complicated Russian novel,
Everyone’s got nine different names.”

Malloy isn’t afraid to laugh at his material, and under Rachel Chavkin’s keyed-up direction, the show gravitates toward campy burlesque, but the creators have their fun and eat it too. The Great Comet of 1812 moves easily between the toe-tapping and the tissue-dabbing. The eclectic sung-through score can alter the mood in a measure: Malloy shows influences of electropop, Russian-accented rock (a la Gogol Bordello), ‘90s Lilith Fair pop, and to-the-rafters Broadway ballads. “Letters,” which opens Act II, could be a Midnite Vultures outtake. “No One Else,” Natasha’s Act I declaration of love to Andrey, should be sung sooner rather than later in James Corden’s car, especially once people hear it interpreted by majestic newcomer Denée Benton; her tone is sweet and clear like crystallized sugar, and her voice is guileless, as secure on top as it is on bottom. She projects intense honesty and endearing openness that makes her sympathetic even as she makes conspicuously bad choices.

Groban does fine against her. He’s not as corpulent as the character Tolstoy describes, and Groban compensates for that with a distracting fat suit. (Either gain the weight or own the discrepancy!) His acting can be stiff and declamatory, given to obvious gestures with his hands that want to describe the lyrics. But the drama in his voice does the work that his body can’t. There’s attractive power in it, too, intensified by a pop singer’s bite, the kind they usually just phone in when they sing live, to protect their voices. He seems to sing rawly from the throat, which sounds excitingly dangerous.

Amber Gray, as Hélène, is appropriately snaky, and slithers through the dance-club number “Charming.” Brittain Ashford, as Sonya, has a sultry tone, and her odd mushy-mouthed affectation brings to mind Sarah McLachlan, which works on “Sonya Alone.” Grace McLean, as Marya, shows off an attractive trill, which she alternates with a fierce bark. And as Anatole, Lucas Steele, who has a doofy Andy Samberg smile and a Tin-Tin lick of blond hair, evinces an instinctual sense of the inherent comedy of his character’s kavorka-possessed arrogance—and he manages tessitura as high as that of Andrew Lloyd Weber’s Jesus Christ. He even, briefly, shreds on the violin.

The Great Comet of 1812’s cast is tremendous straight down to the chorus, which passes out cookies, pierogi, and egg shakers printed with the show’s logo. The actors use audience members to share notes or make the characters jealous; the chorus rubs their fingers around the lips of wine glasses to produce an eerie soundscape. The performers, including the band, make the show both serious and fun. Which is to say, they make this production what it is: antic and crushing and stuck-in-your-head sublime.

Natasha, Pierre & the Great Comet of 1812 is now running at the Imperial Theatre.

Review: Martin McDonagh’s The Beauty Queen of Leenane at BAM

If They Could See Her Now: Director Leigh Silverman on Sweet Charity