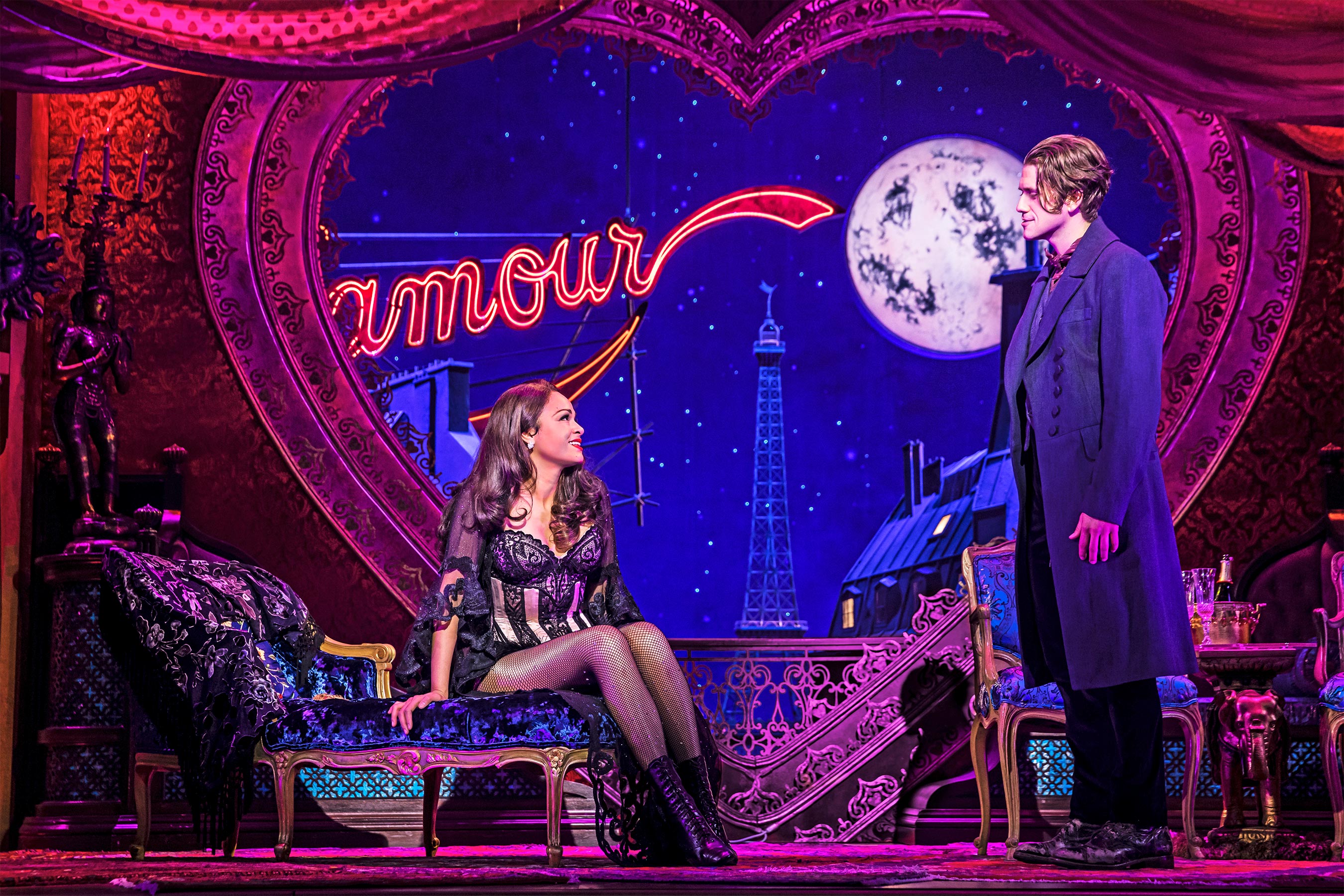 With an updated set of musical mash-ups and medleys courtesy of arranger and orchestrator Justin Levine, Broadway’s Moulin Rouge! makes a good case for itself as the Great American Musical for the TikTok generation. Baz Luhrmann’s 2001 film, at least in terms of plot, plays much the same on the stage. It still tells the familiar tale of a performer, Satine (Karen Olivo), who’s dragged herself out of poverty only to find herself torn between true love with a poor musician, Christian (Aaron Tveit), and financial security with a cruelly possessive aristo, the Duke of Monroth (Tam Mutu). This production’s pacing is more deliberate than that of the film, leaving the characters with more room to breathe.

This isn’t to say that the show, directed by Alex Timbers, shifts away from the extravagance of Luhrmann’s film. Here, Christian doesn’t merely establish his bona fides to his bohemian partners, director Toulouse-Lautrec (Sahr Ngaujah) and Argentinian dancer Santiago (Ricky Rojas), by singing a few stirring lines from “The Hills Are Alive.” The talented musician also whips out lyrics from Rick Astley’s “Never Gonna Give You Up” and Paula Cole’s “I Don’t Want to Wait.” And Satine’s big entrance is no longer heralded simply by “Diamonds Are a Girl’s Best Friend,” as it now also incorporates “Diamonds Are Forever,” Beyoncé’s “Single Ladies (Put a Ring on It),” and even the Commodores’s “Brick House.”

This production approximates the film’s opulent depiction of the Moulin Rouge with the tiniest of details, on and off the stage. It’s in the letters “M” and “R” dotting the doors of the Al Hirschfeld Theatre and the gilded railings featuring figures of cherubs and windmills. And set designer Derek McLane transforms the stage itself into a sort of amusement park, beginning with the Tunnel-of-Love archways and extending to the miniature versions of the Eiffel Tower, Satine’s elephant-shaped dressing room, and, of course, the Moulin Rouge’s trademark red windmill façade. All the while, Catherine Zuber’s colorful period costuming helps to vibrantly fill the void left by the stage version’s necessarily reduced ensemble, a sort of illusory insinuation that’s fitting for a bunch of can-can dancers.

The show also makes effective use of the immediacy of its space. The first few rows of the audience are pocketed between the E-shaped stage, which dramatically extends into the auditorium. There’s much to look at on stage at any given moment, but Timbers knows how to direct our attention. Two sword-swallowing seductresses open this Moulin Rouge! with a performance made more riveting by the knowledge that something could go terribly wrong at any moment. And the show’s ferocious mix of danger and eroticism is amplified by Sonya Tayeh’s muscular choreography, which is bawdy yet precise but also violently sexy, insistent that you ogle every move. Big medleys like the one thematically clustered around Lady Gaga’s “Bad Romance” ooze the artistic ideals of the bohemians: “Truth! Beauty! Freedom! Love!”

Throughout, the performers sell the riskiest of choices. The Duke is meant to represent the antithesis of art, having funded the Moulin Rouge not because he enjoys the music that plays there, but because it gives him access to Satine. But the conventions of a Broadway musical now require him to sing, which is at odds with his character. Mutu gets around this by playing the role with a blistering self-awareness. He sings, sure, but in a way that subverts the lyrics to every rearranged pop song. When he sings the Rolling Stones’s “Sympathy for the Devil,” we’re very much aware of how un-Jagger-like he is, plodding as opposed to strutting across the stage, without a seductive, rebellious bone in his body. His performance of Rihanna’s “Only Girl (In the World)” comes across as nasty and possessive, and his version of Madonna’s “Material Girl” is rearranged with an industrial timber so as to sound absolutely chilling.

There is, though, no way for the show to get around Tveit’s emotionally disconnected performance. His goofy charms and top-notch singing work well enough early on for the scenes in which Christian’s lightly wooing Satine with silly love songs. Elsewhere, though, he glides over the weighted words that the other actors intentionally struggle with, especially the standout Olivo, who has to find a way to sing through her character’s consumptive fit. Christian comes to believes that Satine has abandoned him in favor of the Duke, and is meant to rage at the thought of his lover sleeping with another man. This revelation is designed for maximum effect, set to “Roxanne” and accompanied by a brutal Argentinian tango, yet Tveit’s recitation lacks emotional range. Likewise, when Christian’s thoughts turn to suicide—he loads a gun while singing “Crazy”—there’s not even a hint of despair in his tone.

Moulin Rouge! is already a commercially appealing juggernaut of a musical, with an upbeat, lovestruck first act that sublimely distills the rich essences of all your favorite love songs into a heady, artistically satisfying experience. Sadly, one actor’s disconnect is enough to make the second act feel emotionally off-key. As a result, the show ultimately fails to uphold the bohemian ideal of love and art being fused in truthful fashion.

Moulin Rouge! is now playing at the Al Hirschfeld Theatre.

Review: Hercules Wrestles More with Heroism Than with Female Liberation

Interview: Kate Burton on Coriolanus in Central Park and Her Path to Success