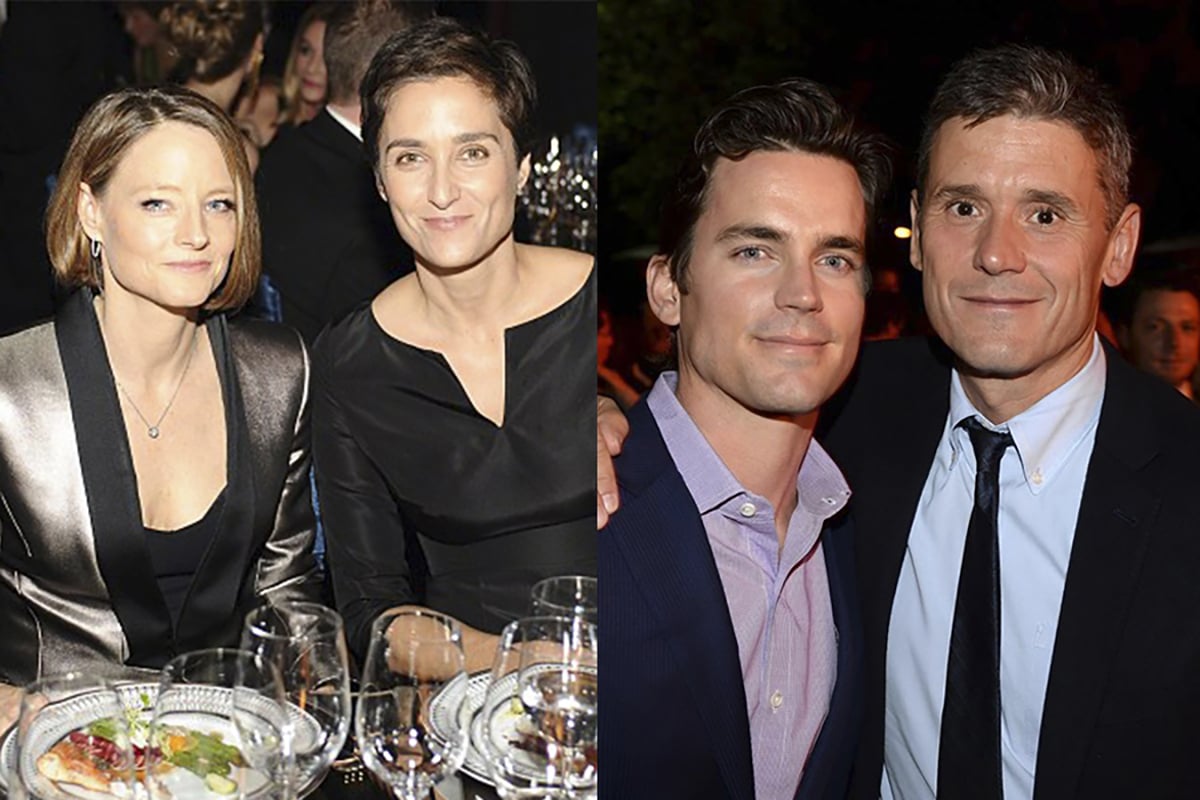 She certainly came prepared. The E! correspondents may have told you that Jodie Foster wore Giorgio Armani to the Golden Globes, but her frock was more like a suit of armor, its metallic straps criss-crossing her chest as if she were bracing for impact. Amid an awards show that’s often little more than a boring, booze-soaked, wannabe Oscars, Foster—who, at 50, proved a drastically young choice for the HFPA’s career-defining Cecil B. Demille Award—provided a riveting slice of LGBT history, using the acceptance of her honorary trophy as an opportunity to deliver a coming-out speech…sorta. Everyone knows the story by now: How Foster jokingly announced that she’s “single” after a virtual drum roll of anticipation, how she thanked her longtime partner and two strapping sons, and how she professed the value of personal privacy, declaring that she’s no reality star, like “Honey Boo Boo Child.” Gawker had a particularly douchey field day with the latter portion of Foster’s monologue, viciously berating the actress for demanding privacy as a public figure in a very public forum. The contradiction at which Gawker took aim is glaringly apparent, but while celebrities may sacrifice certain libel rights and anonymous trips to the grocery store, they are not, in fact, required to divulge personal details to the masses. If there’s anything to deride about Foster’s show-stopping moment, it’s that it felt dated, dusty, even quaint.

Like most viewers, I was glued to my TV as Foster half-spilled her guts at the podium, her words flying out in a candid rush likely helped along by cocktails, but her building-up of the pseudo-confession (which was, admittedly, quite admirable and heartfelt) announced her age more loudly than any lifetime achievement prize could. From wardrobe to word choices, the two-time Oscar winner approached the moment with an all-encompassing wince, even mentioning her publicist’s supposed terror in the process. Already a mature, soon-to-be mom back in 1997, when Ellen Degeneres delivered the “Yep” heard ‘round the world, Foster hails from a generation still hung up on the notion of public gayness as career suicide. Moreover, she’s a star whose sexuality has been in question for what feels like ages, so her elaborate confirmation, however tasteful and compelling, seemed like old news in more ways than one. In her way, Foster mocked what she essentially referred to as the new trend of gay stars being compelled to come out, using that contentious issue of privacy as a defense against her delay in jumping on the bandwagon. What Foster failed to acknowledge is that today’s celebrity outings aren’t so much trendy as they are, to pull a Foster and invoke a pop culture reference, the new normal. The growing banality of stars making their gayness known has been one of the stealth triumphs of the Obama era, and at the risk of suggesting agreement with Gawker’s divulge-all viewpoint, if Foster indeed feels there’s a cultural urge for gay celebs to come clean, that alone is something to be celebrated.

Naturally, there’s also the argument that Foster’s long-postponed address of the issue is disrespectful to the gay community, implying she’s not only out of touch, but insensitive to the notion that an earlier admission, in tougher times, might have helped a lot more people (it also doesn’t help that, as some outlets have criticized, her acknowledgment was paired with a suggestion of retirement, which worsens the sting of her wait and surely cripples her value as a public voice for LGBT rights). In regard to gay media figures, all visibility is positive, but I’m not so sure the earth is spinning any better now that Jodie Foster’s lesbianism is verified. I did, for a while, take issue with the tight lips of Anderson Cooper, a man of stature and public importance well beyond the realm of entertainment, and whose open joining and championing of what’s becoming a new movement of civil rights could change minds and influence real-world coverage of LGBT matters. With a lifestyle well known for some time throughout New York and within his profession, Cooper—who, as an international correspondent roaming certain areas that realistically kill gays on sight, had more justifiable reticence than any other recently outed celeb—didn’t surprise anyone when he finally stated the obvious, and it was a satisfying moment indeed. It was a bit of a letdown that the news came via Andrew Sullivan’s The Dish, a blog under the umbrella of odious Tina Brown’s The Daily Beast. But, as Sullivan stated in the July 2012 article, which included the text of a personal email from Cooper outlining all the details, the two men are old, trusted friends, and the fact that the story broke via a modest, copy-and-paste blog post directly reflects the gulf between Foster’s spectacle and the actual spread of equality.

It also speaks to the myriad ways gay stars can easily, and often subtly, answer the big question today. Foster may not have received the memo that televised declarations and People cover stories have been shuffled aside as the norm (give or take a Ricky Martin article), but many younger stars who’ve come of age amid the shifting tides have, including 39-year-old Jim Parsons, who revealed his relationship to The New York Times in a May article discussing his work in The Normal Heart; 19-year-old Ezra Miller, who casually identified as queer in an August interview with OUT; and 34-year-old traffic-stopper Matt Bomer, who, in what may be the finest confirmation of celebrity gayness to date, simply thanked his longtime partner in a speech while accepting a Steve Chase Humanitarian Award (the honor was for Bomer’s efforts in fighting HIV/AIDS). These unforced, ain’t-no-thang methods of disclosure represent progress that Foster’s headline-maker managed to both support and contradict. Bomer’s case, specifically, is draped in hope, as the heartthrob has long been stated as choice No. 1 for the very promiscuous—and very straight—Christian Grey in the forthcoming film version of E.L. James’s 50 Shades trilogy. And it’s not just industry types who are doing the cheerleading, it’s the books own rabid, female fans. After all, what could be sexier that the ultimate unattainable male? The point is, we seem to have at last reached a time when going public as a gay celebrity doesn’t equal career death, but a career surge. May be a good idea to rethink that retirement, Jodie.