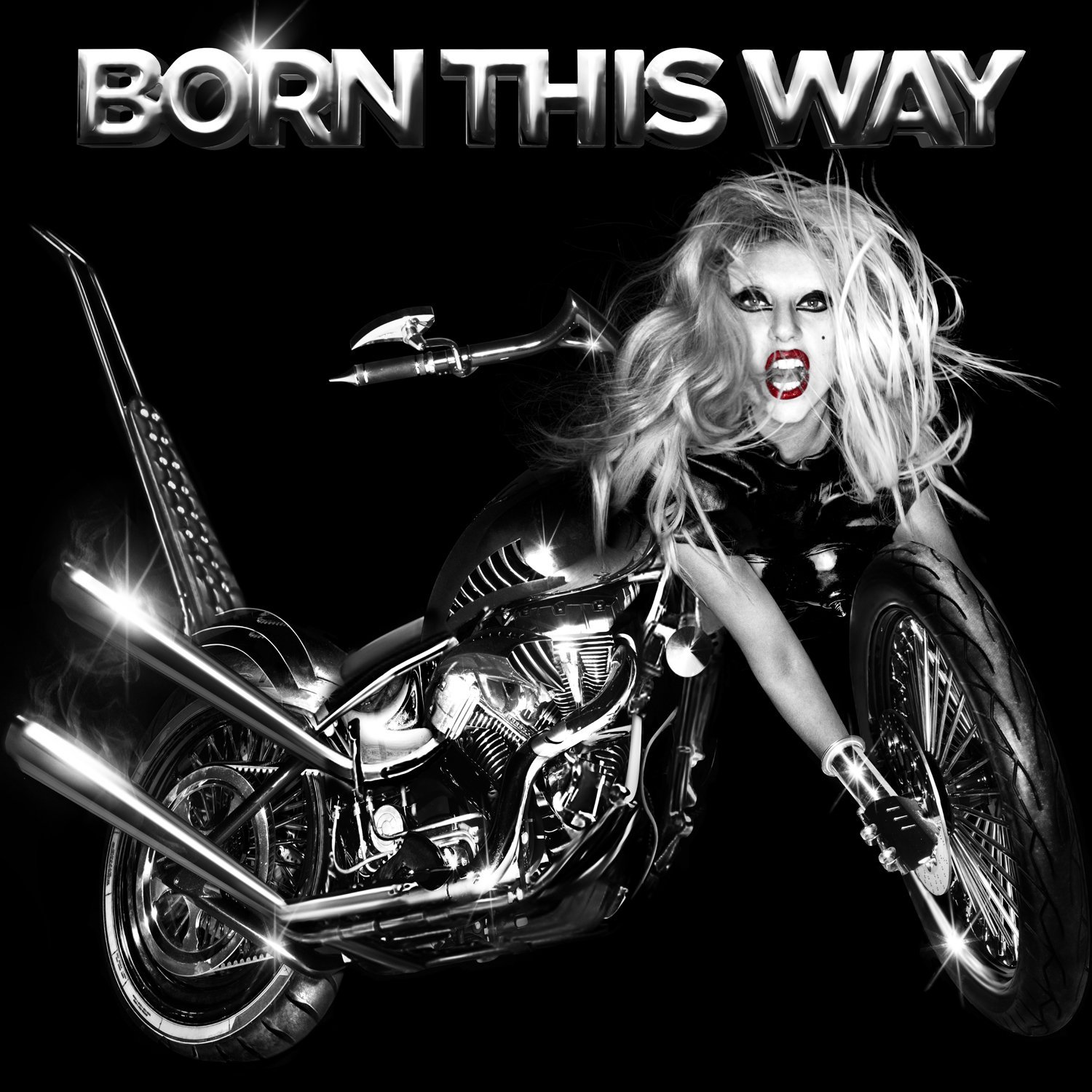 Prophets of doom claim that this Saturday—May 21, 2011—will be the beginning of the Rapture and that God’s forsaken shall be left on Earth to be tormented for five months before the world comes to its final end. Satan, you can imagine these Christian fanatics saying, will be revealed in the form of a pop star, saturating radio airwaves with her malevolent message of equality for all, leading the damned to hell on the backs of grotesque motorcycle-human hybrids sporting hooker-red lipstick and branded with the definitive sign of the devil: a beveled and embossed logo. Of course, that’s just an allegory conceived to frighten us into subservience to pop music’s status quo. But Lady Gaga’s official sophomore long player, Born This Way, feels like it’s been hyped for almost as long—and certainly as fervently—as the End of Days. Which poses two distinct problems: the age of its songs and its stubborn obedience to said status.

M.I.A. is often cited as a counterpoint to Gaga, as an artist who, despite criticisms of commercializing political violence in the same way American rappers have packaged and sold the gangster lifestyle to suburbia, makes music that’s as challenging as her persona is hypocritical. Gaga’s flaw is almost exactly the inverse: She fancies herself a cultural revolutionary, employing subversive, if not always completely cogent, visual messages to promote self-love and civil rights but fails to create music that similarly challenges pop-radio audiences. It’s a dilemma that faces any mainstream artist who wants to attain—and maintain—popularity, and thus reach the widest possible audience.

For the better part of two decades, the hip-hop community has applied a strict litmus test to any newcomer hoping to crack the upper echelons of rap: Street cred is essential. Rock has often had a similar requirement of authenticity, but almost anyone is accepted in the glittered halls of the pop pantheon. That is, unless the level of one’s dues-paying is deemed disproportionate to his or her success. Questions about Gaga’s Upper East Side upbringing and rise to fame have persisted since she became a household name, and with good reason: Her willful admission that everything she does is artifice, her on-stage declarations that she hates the truth, and her opportunistic transformation from vapid fame whore to protective mama monster with a message all point to her being, to paraphrase the performer in an early interview, the most impressive con artist pop music has ever seen.

Madonna has always been accused of appropriating the “other” for her professional gain, but it’s Gaga who’s taken that conceit to almost obscene levels, pandering to the gay community in particular in ways no other pop artist ever has, not by paralleling her oppression as a female to that of other minorities, as Madonna so frequently and shrewdly has, but by actually transforming herself into a “freak,” first with outlandish costumes and, more recently, with prosthetic body modification. These elements are all fascinating redefinitions of beauty, of what’s “normal,” and physical manifestations of the ugliness that Gaga may have once felt inside, but the girl who was, by many accounts, pretty popular in high school, has effectively fetishized the “other.”

The reason many have accepted this blatant co-opting, then, is because we want to believe that—again, like Madonna—Gaga’s motivations are pure, even if championing the cause of what she realizes is her core fanbase seems like the ultimate exploitation. Gaga’s near-pathological, around-the-clock commitment to the persona she’s created, to say nothing of her devotion to her fans, is about as “real” as it gets in the pop world. And, occasionally, she succeeds at convincing us that being a freak is a state of mind: The freakiest thing about her fantastic “Born This Way” video isn’t its ideas (the creation myth that opens the clip is really no different from the story of Adam and Eve or the war between matter and antimatter in the early universe), it’s Gaga herself—that 30-second span leading up to and through the final chorus where she unleashes her inner freak, grinding up against Rick Genest, whipping her Pink Ambition ponytail around, and rolling her eyes into the back of her head like she’s possessed.

For all the griping about “Born This Way” sounding too similar to “Express Yourself” (which it does), it’s also a retread of The Fame Monster’s “Dance in the Dark,” which shares the same producer, structure, and themes—only those themes aren’t pounded into submission with too-literal lyrics and a sound design that was ostensibly tinkered with nonstop since Gaga first sang the hook at the VMAs way back in September. “Born This Way” might have sounded good in a multimillion-dollar recording studio, but on today’s portable gadgets, its chorus is a busy, over-produced earsore.

In fact, choruses seem to be the problem with all of the album’s singles so far. And what’s a pop song without a good hook? The speed metal-meets-“Bad Romance” knock-off “Judas” is lyrically more interesting than “Born This Way,” but its Aqua-esque chorus is too sweet and poppy for a torch song dedicated to one of the Bible’s greatest villains. The electro-rock ballad—and accidental third single—“The Edge of Glory” isn’t retro so much as retrograde, starting off with some crafty Art of Noise synth tones before morphing into what sounds like the theme song to an early-’90s sitcom, or an inspirational sports flick, as sung by Bonnie Tyler. And the promo single “Hair” is a derivative but perfectly serviceable club track about highlights that’s turned into a dumping ground for every bad idea Gaga’s had in the last 12 months: schmaltzy piano-woman melodies, overwrought choruses, inexplicable sax solos. Apparently she’s never heard of Hair—or the queen of all hair-as-self-actualization dance-pop anthems, RuPaul’s “Back to My Roots.”

Which is all to say that I had my claws out for this one, but I couldn’t stay mad at Gaga for very long—not with songs like “Marry the Night,” a more worthy successor to “Dance in the Dark” that channels post-disco Moroder, and the filthy-fabulous “Government Hooker,” which manages to make the oft-robbed bassline from New Order’s “Blue Monday” sound brand new. And not when the girl sells a lyric like “Dirty pony, I can’t wait to hose you down” in a faux-continental accent without cracking up on “Heavy Metal Lover.” (Typically flouted watersports-enthusiast community, you now have your very own anthem!) Gaga’s self-proclaimed status as a student of all things pop culture results in some largely exhilarating experiments in pastiche: “Electric Chapel” is like a song by the Cardigans as fronted by Debbie Harry, featuring Slash, and produced by John Carpenter, while “Unicorn Highway (Road 2 Love)” might be what it would have sounded like if the Lizard King’s heart had held out a few more years and he recorded a disco song.

References to other erstwhile ’70s icons like ABBA (“Americano,” “Judas”) and Queen (“Yoü and I”) are a bit less imaginative, and Gaga gets in trouble when she allows her affinity for her fans to inform her songwriting, as she does on “Hair” and “Bad Kids” (for the record, it sounds like she’s singing “faggot” instead of “bad kid,” which, come to think of it, would have made for a much ballsier, albeit dicey, political statement), but it’s easy to forget that she was still only 24 when she composed most of these songs. She’s indeed on the edge of glory—that is, she isn’t quite there yet, but it’s fun to watch her try so devotedly.

Norman Mailer once said that, when writing fiction, one should draw from their own personal narrative at oblique angles rather than cutting straight through and using it wholesale; this way, a writer can use their personal experience over and over in different ways without ever exhausting it. To that point, Gaga has tapped the well of the Queen of Pop so often and so directly that it will become impossible for her to continue to do so without facing fierce criticism. Which is unfortunate since she’s most interesting, even most relevant, when striking that particular pose, as she does on “Scheiße,” a Dietrich-by-way-of-Madonna-on-steroids techno-feminist manifesto.

But as it stands, it appears Gaga’s most prominent muse throughout most of Born This Way is Lita Ford. When Gaga graduated to stadiums, her music clearly followed suit. There’s nothing small about this album, and Gaga sings the shit out of every single track. In many ways, Born This Way is akin to the Killers’s under-appreciated sophomore effort, Sam’s Town: bloated, self-important, proudly American, an exercise in extraordinary excess. There are lots of mentions of Jesus Christ throughout the Born This Way project, not to mention Judas, Mary M., and machine guns that shoot church bells. Which makes sense, since Born This Way will likely be playing on a loop in hell. And all the “bad kids” will be dancing to it for eternity.