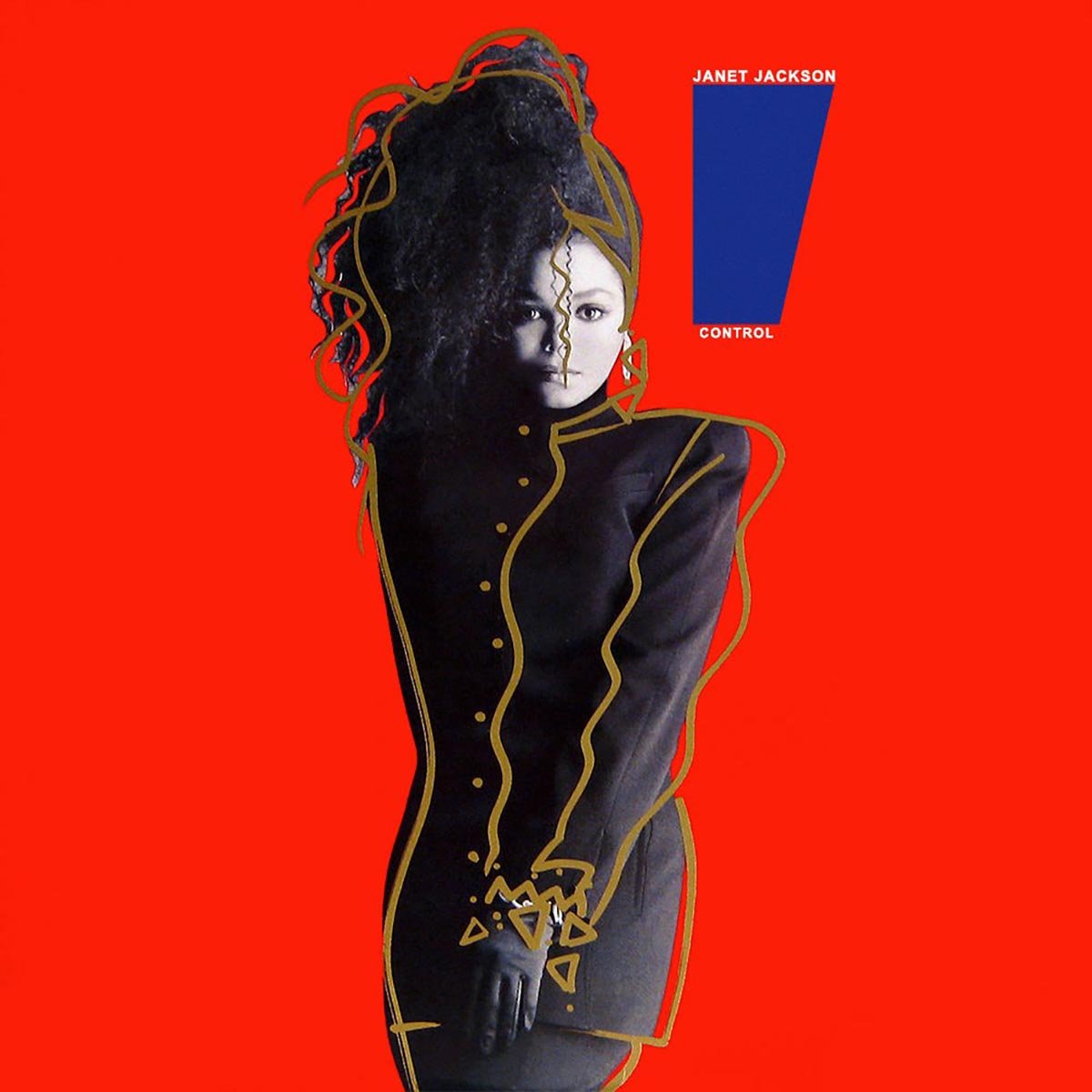 There’s perhaps no better testament to the power of Control as a quintessential statement on personal and artistic self-actualization than the still pervasive misconception that it’s Janet Jackson’s debut album. Her two previous albums, Janet Jackson and Dream Street, have since been relegated to Janet’s “prehistory.” Control simply feels so much like Janet’s moment of entrance that pop culture’s selective amnesia can be easily forgiven.

But despite the brouhaha made about Michael’s little sis stepping out from the family shadow, Janet wasn’t the only star born with Control. Tellingly, the only Grammy that the album managed to score was Producer of the Year, given to Jimmy Jam and Terry Lewis, who had been fired a few years earlier from Prince’s The Time after missing a concert. Control’s industrial, aggressively speedy beats (a relatively new concept for R&B at the time) turned Jam & Lewis into pop music’s new visionaries. Their unique blend of sparse, Minneapolis funk, sweet bubblegum pop, and inventive synthesized vocal treatments proved so definitive that Janet has spent her entire career working with the duo.

Ironically, it could very well be that Jam & Lewis’s sound, a crowded wall of percussion, played a major part in generating the most persistent slam against Janet—namely, that her voice is thinner than Michael’s new nasal bridge. But one can only assume that critics who have leveled this charge against Janet somehow missed the explosive “gimme a beat” vocal pyrotechnics she unleashes all over “Nasty” (which turned “Miss Janet if you’re nasty” into one of those lines everyone sings along to). Or that they completely dismissed how perfect her tremulous hesitance fits into the abstinence anthem “Let’s Wait Awhile.”

Control was every bit the hit machine that her brother’s Thriller was. Nearly every track on the album received some airplay, and the majority of them catapulted straight into the Top 10. The title track opens the album with its herky-jerky start-and-stop beats, but in retrospect, it almost seems like a curtain call (the brazen, forthright lyrics make a lot more sense coming from a woman who’s just gone multi-platinum, not one who’s coming off of two flop albums). The pensive, alternating piano chords of “When I Think of You” rival the opening strains of Madonna’s “Borderline” for precocious, innocent ‘80s pop. And the female-empowering “What Have You Done for Me Lately” predates TLC’s “No Scrubs” by over a decade.

To compare those two assertive songs illuminates Janet’s most tangible personality asset and what has allowed her career to last for decades. Where TLC come off as judgmentally shrill, Janet balances her message of discontent with the acknowledgment that—his “dancing feet up on her couch” aside—she still can find it in herself to love the man who has continually disappointed her. This is Janet’s key star quality: ever since she shyly fielded Dick Clark’s questions on “American Bandstand,” Janet has always striven to keep her personality grounded. Even with the taboo-ridden The Velvet Rope, Janet seemed less interested in shocking for shock’s sake (again, like Madonna) and more interested in merely explaining where she was coming from.

Control also saw the birth of Janet the music video star, as six of the nine tracks were turned into popular videos that all but announced her as queen of the production dance number. Though many of these videos don’t hold a candle to her later masterpieces—“Rhythm Nation,” “Love Will Never Do (Without You),” “Got ‘Til It’s Gone”—her Touch of Evil-channeling one-take clip for “When I Think of You” was her first successful attempt at creating a video around a specifically cinematic concept. Nonetheless, the videos put an all-important face (and body) to Jam & Lewis’s tunes. Dance is always underrated as a musical ability, and in many respects it was Janet’s surprising and new (Paula Abdul-trained) dance skills that propelled her star into the stratosphere.

Despite sounding as impenetrable as a tank, the Jam-Lewis formula wasn’t completely infallible, and even an album as terse as Control has a few less-heralded underdog tracks, to be diplomatic. “You Can Be Mine” is a bombastic misfire that sees Jam & Lewis putting their drum patterns and faux orchestral hits into autopilot overdrive, to the point that during the final minute Janet seems to take the reigns, demanding, “Fellas help me out, can I hear that line one more time?” “He Doesn’t Know I’m Alive,” which is bouncy and bottom-heavy where the rest of the album is tightly-pitched and precise, is the album’s darkhorse, with a probably too-overt application of mid-‘80s pop-jazz schmaltz. Though it’s the only track on Control that puts Janet in passive mode, it’s still marked by her gamest attempt at vocal acrobatics.

The second most common criticism of Janet albums—outside of those dogging her singing abilities—is that they usually drift away in the final stretch into a languid ballad blah-blah-land. (All for You tried to remedy this problem by placing the ballads at the halfway point but ended up only killing the album’s momentum even quicker.) Control is no exception. “Let’s Wait Awhile” would’ve been a great place to end the album, but Janet, Jam, and Lewis make the perverse decision to immediately proceed into “Funny How Time Flies (When You’re Having Fun),” a song that sounds like the accompaniment to the first stages of heavy-petting.

But the dud tracks of Control are in the minority—instead of splitting the difference, as they do in all of Janet’s subsequent LPs, save The Velvet Rope. And furthermore, most everyone, whether they pledge allegiance to Rhythm Nation or bow to janet., will admit that she hasn’t, nor will she ever, create an album as cohesive as Control. So what if it doesn’t have “Escapade,” “If,” “Together Again,” or any other number of Janet’s endless string of fantastic pop singles? In the end, pop music is almost always about the discovery of the next big thing, and Janet’s crowning moment in Control was among the biggest.