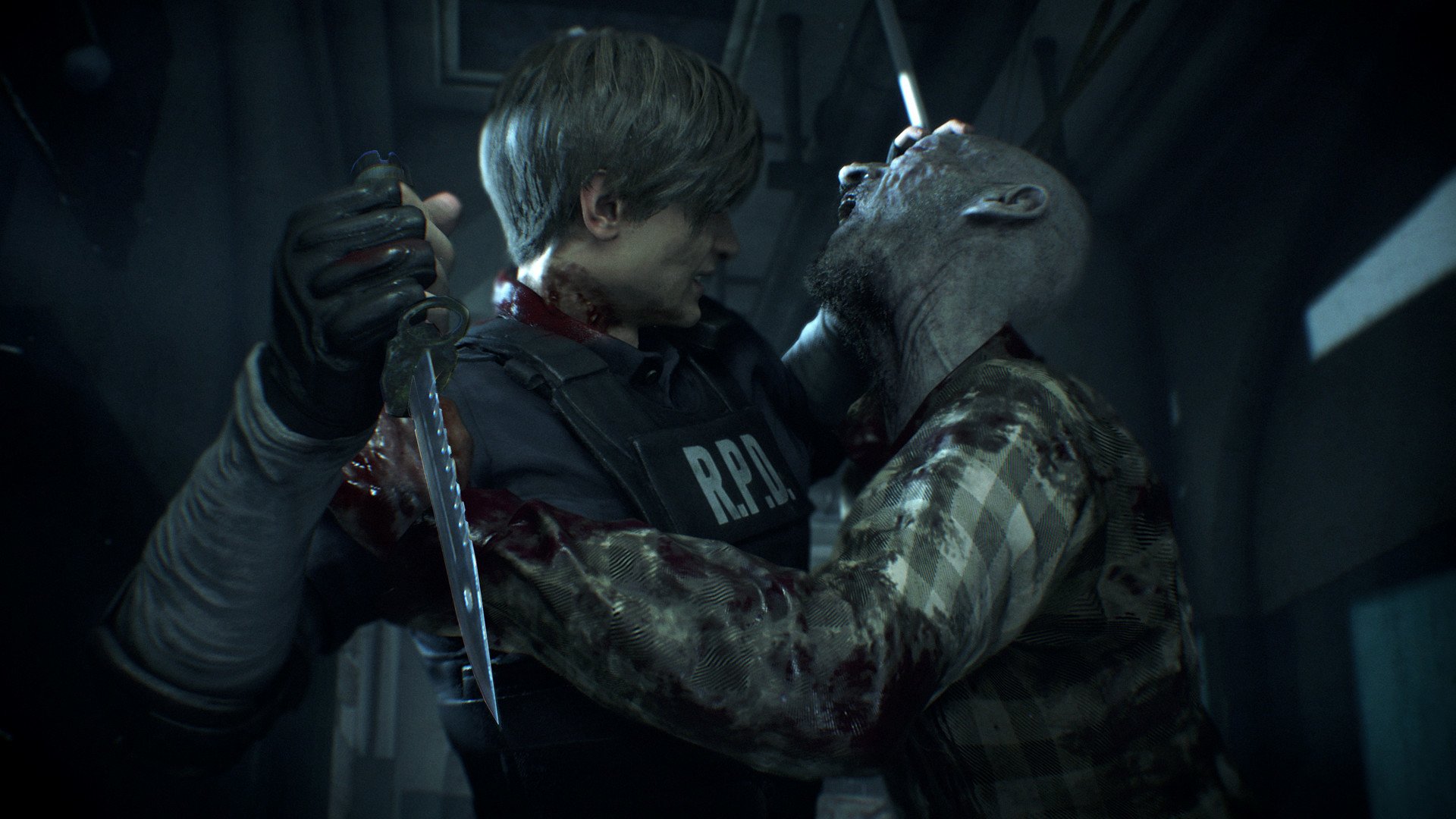 It’s evident almost from the start of the Resident Evil 2 remake that whatever creative spirit guided the masterstroke of Resident Evil 7: Biohazard continues to grip the developers at Capcom. This remake more than just puts a moody coat of paint over the original game; it’s an assurance that the maliciously novel ideas that guided Resident Evil 7 may very well become the governing principles of the series moving forward.

All that really remains here of the Resident Evil 2 that was released way back in 1998 is the general setup and story beats. A few months after the events that occurred at the Spencer Mansion in the first Resident Evil, the infamous zombie-making t-Virus has spread to the general population, laying siege to Raccoon City, right as rookie cop Leon Kennedy shows up for his first day on the job and college student Claire Redfield arrives on the scene looking for her brother, series protagonist Chris Redfield. The two of them link up, and end up taking refuge in the same place: the Raccoon City Police Department, a converted art museum hiding more than just a few fancy paintings or sculptures in its basement and attic.

Regardless of whether you play as Claire or Leon, you start the game with a pistol, a few bullets you have to make count, and one vague goal that lies in a part of the police station with no power—just a whole lot of splattered blood and grotesquely detailed dead bodies. You then meet your first zombies, and they’re still of the shambling, George Romero variety, which works in your favor since it’s relatively easy, given enough space, to stay out of their range. The upshot is that these ghoulies are frighteningly resilient. Unless you’re lucky enough to land a critical hit where the head explodes, your average undead Joe will have to take three or four point-blank shots to the dome before it even staggers back.

Unlike previous games in the series, slipping into another room just means you have about five seconds before whatever’s chasing you breaks down the door. There’s never any guarantee in Resident Evil 2 that a downed zombie won’t get right back up, which makes even stepping around corpses on the ground a potential gruesome death waiting to happen. Your characters’ recycled voice lines—stating shock and surprise about the zombies not staying down—can get monotonous over time, but, really, it’s not like Claire or Leon’s disbelief is unwarranted.

Resident Evil 2 builds hours upon hours of nerve-wracking tension on the realization that guns, grenades, and ammo aren’t only scarce, but having them isn’t going to guarantee your security. In the end, you’re better served by hiding from your enemies, running from them, and using your immediate environment to impede them. Going for the kill each and every time is more likely to end with you firing an empty gun at the worst moment imaginable. The elaborate design of the hallways gives the designers leeway to hide all sorts of bloody horrors where you least expect them. Later, the blind Lickers suddenly transform Resident Evil 2 into A Quiet Place: The Video Game, as you attempt to control how much sound your footsteps make around them, hopefully avoiding their erratic attack patterns altogether.

Eventually, the player will also have to contend with Mr. X, who represents all of the game’s ubiquitous dangers wrapped into one massive, trench coat-wearing behemoth, and is easily the most unrelenting and terrifying video game monster since Alien Isolation’s preternaturally vicious Xenomorph. Even before Mr. X shows up, virtually every step you take involves some measure of risk assessment, from waiting for visual confirmation, to availing yourself of the game’s incredibly expansive and nuanced soundscape, to learning to fully utilize the game’s impressively informative map and your own carefully curated inventory.

Particularly agonizing is how the game has you figure out how to act through clues in the soundscape. If you want to stay alive, you’ll have to determine which direction the ever-stomping Mr. X is moving in, and how many rooms away he is. Elsewhere, you learn how to discern the distinct growls of nearby Lickers within the din, and whether or not these baddies even sense your presence for one reason or another. A small mercy is how carpets can silence your own footsteps, as is learning where and how you should fire your guns.

This would all be for naught if the game didn’t also deliver on reasons to press on beyond your own survival, but Resident Evil 2 is able to take the 1998 game’s premise and imbue it with some surprising and engaging storytelling. Claire’s innate concern for an Umbrella scientist’s little girl blossoms into an effective little running thread about a broken family. Leon’s own tale of survival mutates into a horror-infused conspiracy thriller. Much of the first half of the game is spent watching a wounded cop’s health deteriorate into nothing, and the way that thread culminates at the worst possible moment is perfectly organic in its plotting.

Had Capcom given into fans back in 2002 and remade Resident Evil 2 immediately on the heels of the GameCube remake of the first title, we’d have gotten a game that was undoubtedly pretty but still held fast to all of the series’s safest and unimaginative tendencies. Instead, this remake we’ve just been handed is something altogether fearless and perpetually full of surprises—a near-immaculate piece of survival horror willing to always put pressure on the player. Resident Evil 2 forces you to use all of your cunning and caution to figure out how best to handle its cavalcade of horrors, even as it never puts you at ease that all your bravery, all your weaponry, will ever be enough to take down what’s waiting for you in the dark. And how it sustains that tension allows it to surpass even the triumph of Resident Evil 7.

This game was reviewed using a retail PS4 copy purchased by the reviewer.