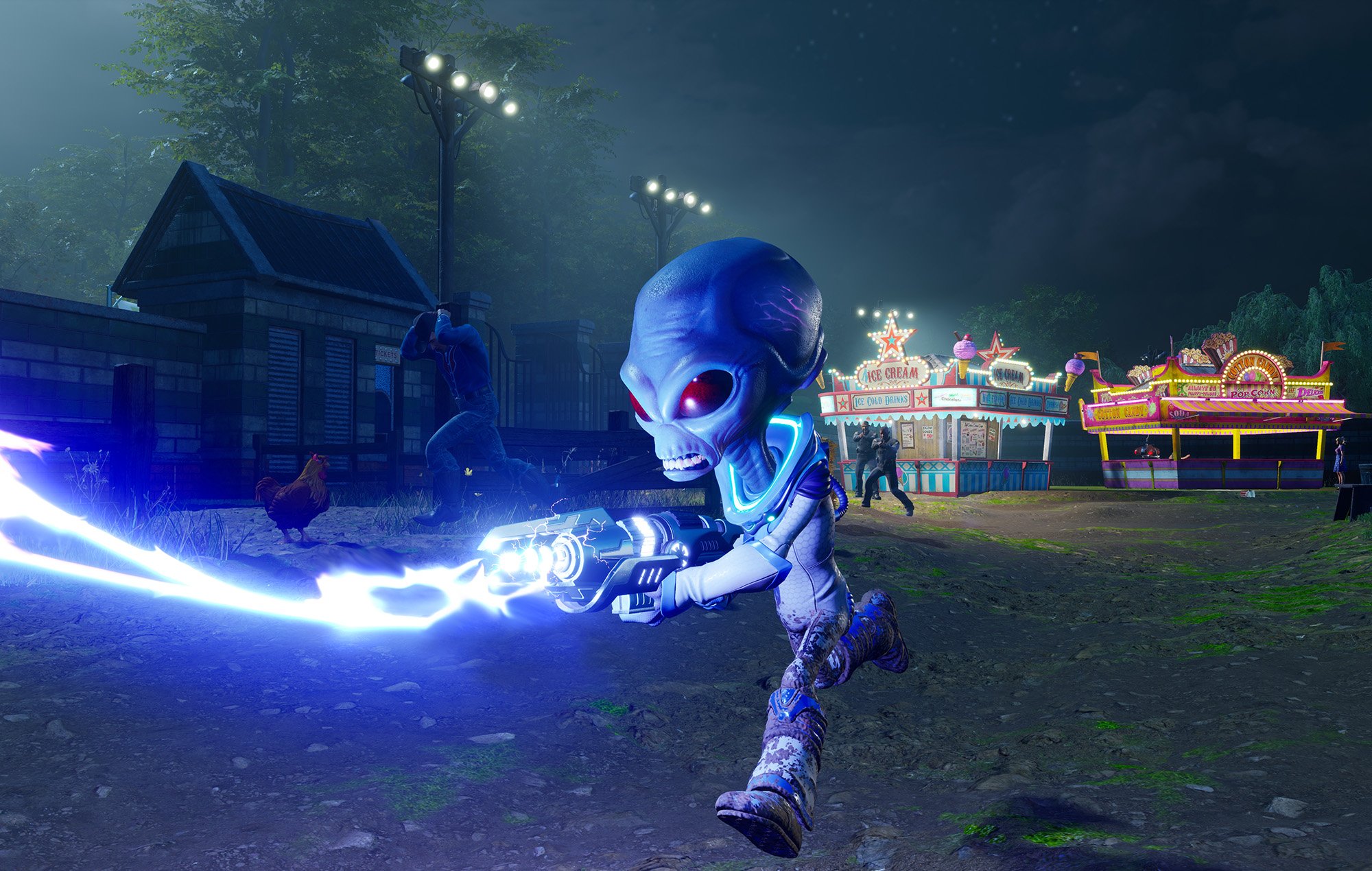 To say that Destroy All Humans! feels like a relic from a different age would be an understatement. The original 2005 game, goosed up by Black Forest Games for current-gen consoles, is a snapshot of gaming on the cusp, back when wild ideas and great writing could live in a sort of digital middle class right alongside big-budget blockbuster titles, and feel right at home. From its approach to problem solving and to its unabashed politics, there’s an anarchic streak running through it. That it stood out less in 2005 is somewhat damning given where we are now, but this remaster’s upgraded visuals, controls, and mechanics have made everything special about the original release shine much brighter.

In a nutshell, Destroy All Humans! suggests a ‘50s-era alien invasion movie where you get to play as the aliens. Just the idea of hopping in a flying saucer and laying waste to the cities of men would carry a game all by itself, and doing it as a period piece even more so, which makes it rather surprising that we haven’t seen another game quite like this one in recent years. Which makes it somewhat of missed opportunity that this new version of the game lacks for a black-and-white filter that could have supplied an extra mood boost.

But we still get the lasers and flying saucers, and, of course, the permission to lay gleeful waste to ‘50s suburbia. Outside of his saucer, Crypto gets to walk around on foot, either disguising himself as a hapless human or wreaking havoc with all the alien rifles, probes, and psychic powers at his disposal, and these are the sections where the game gets to show off much more of its creativity. Crypto can lift and throw all of Earth’s pitiful creatures with his telekinetic powers, and there’s plenty of weaponry allowing you to either shock enemies to death, reduce them to skeletons, or shoot a device that allows Crypto to probe them so hard that their brains pop out. No one ever accused Destroy All Humans! of being a particularly mature game.

Except when, surprisingly, it is. There’s a mean undercurrent to this game, whose human characters are all ‘50s caricatures, many of them suggesting white-bread castoffs from a Norman Rockwell tableau. And with Crypto’s mind-reading powers, you get to hear that which is thinly disguised behind the upright citizen’s façade: the racism, the Nixon and McCarthy worship, the self-hating homophobia. “I wonder if I ought to hit somebody with my nightstick,” thinks one police officer. “Could be fun.” All of that suggested a smirking parody of a not-so-great America back in 2005 when the game was originally released, but today it plays as an unsubtle reminder of how little things have changed in this country since the ‘50s. The game’s political humor simply hits very different now, and it makes all the different ways that Crypto can mess up Main Street, U.S.A. all the more impactful.

The good news is that it’s definitely much easier to do that now than in 2005, with the remake getting a whole host of much welcome and smartly implemented quality-of-life improvements that bring the original game’s clunky controls up to code. What was once a stiff, finger-tangling process of switching between weapons and telekinesis is handled with a modern, elegant weapon wheel, and a separate button for telekinesis. A mid-air dash and, later, a pair of hover skates make on-foot traversal much easier, and more dynamic.

All of that, however, isn’t exactly a panacea for the things that haven’t aged as well. The highly regimented and rote mission structure still makes some missions feel a bit empty, especially now that open-world quest mechanics have evolved so far past how the original version of Destroy All Humans! did things. The difficulty curve swings wildly from mission to mission, which could have been flattened with a dedicated button for lock-on targeting. This is a game before its time in many ways, but there are parts here that were clearly made in 2005.

Still, Destroy All Humans! moves at such a steady clip that you won’t find yourself fixating for too long on the things it does wrong. Even the more annoying missions tend to breeze by, ushering players toward the next nifty weapon or hilarious cutscene without breaking stride for much more than to let players upgrade their arsenal. And there’s a relief to that. Modern open world games are designed in such a way that bad design decisions tend to stew and linger in ways they don’t here. This is the kind of game you don’t realize you missed until you start playing it, one that doesn’t demand much of the player’s time or commitment or discipline but is just trying to find new ways to amuse you from one stage to another.

This game was reviewed using a review code provided by Evolve PR.