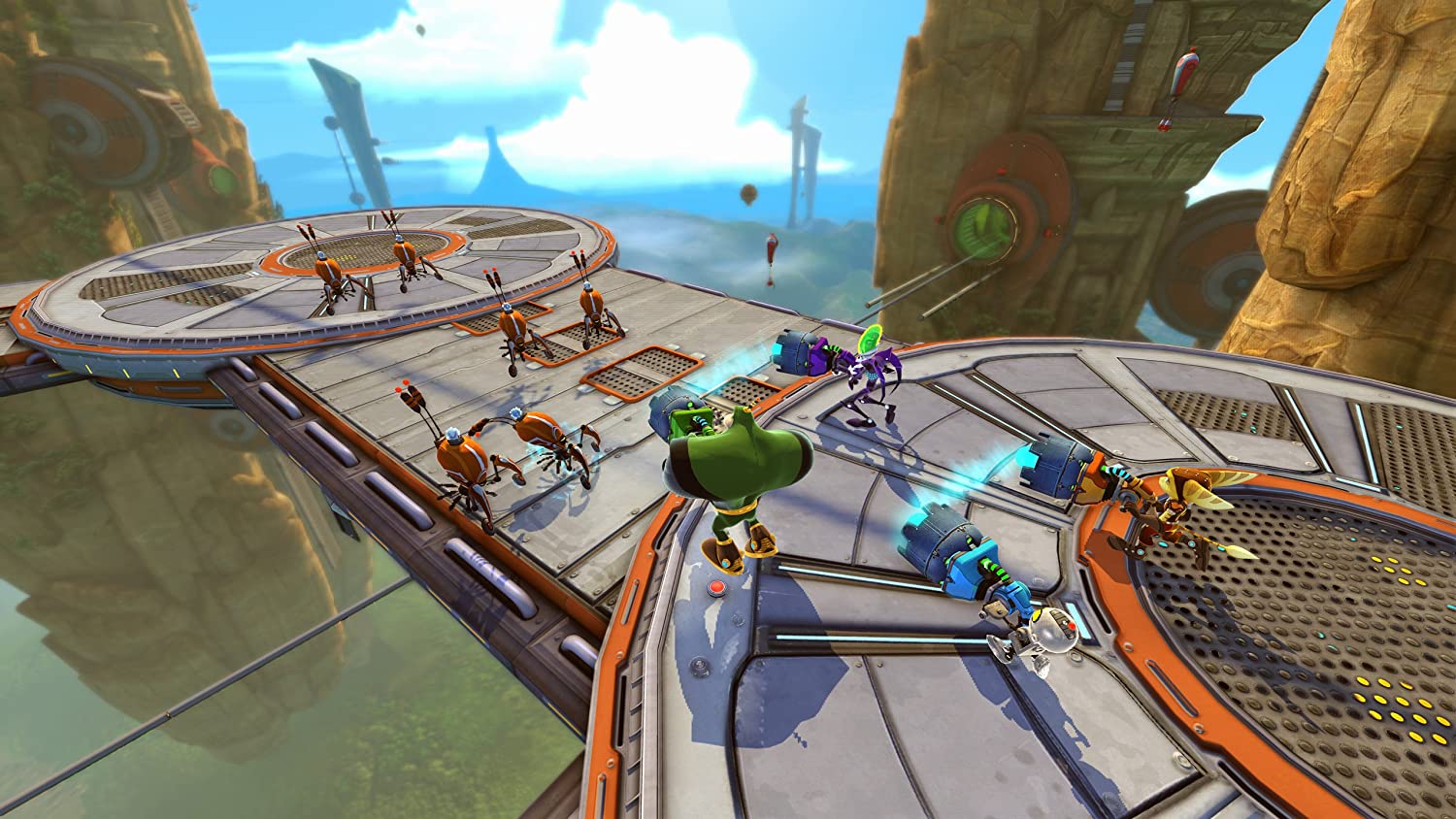 The Ratchet & Clank series is cherished by many gamers for its incredibly sharp wit, ridiculous weapons, and the sheer joy of space exploration. Insomniac Games’s Ratchet & Clank: All 4 One is the developer’s second crack at a “co-opetition” title after 2005’s Ratchet: Deadlocked. The colorfully animated action-shooter is a fun, albeit mixed, bag that’s more of a compromise of expectations than an all-out venue for unleashing your assorted tools of destruction.

The charmingly sophomoric game finds Ratchet, Clank, Dr. Nefarious, and Captain Qwark banding together for a chaotic action-arcade campaign, and boy is there a ton of action. Sometimes the characters are engulfed in so many explosions that picking out their places on screen is quite the task. Insomniac grabbed enough of the paramount elements from previous Ratchet & Clank titles for diehard veterans, but All 4 One is more akin to the Turtles in Time arcade game than the original Ratchet & Clank experiences on PS2 and PS3.

This fact is both a good and a bad thing. The exploratory nature of previous Ratchet & Clank games is mislaid when you have a fixed and sometimes aggravating top-down camera. Thankfully, it zooms in for thorny platforming segments, but if your friends are wandering off to the edge of the screen, the experience can prove to be a little slapdash. Players can still up their arsenal of absurd weapons. Some old favorites show up, such as the Warmonger rocket launcher and Pyroblaster, but there are now character-specific weapons. (Ratchet uses his Dopplebanger to distract enemies, Clank slows down time with the Zoni Ray, Qwark puts his Quantum Deflector to good use as he guards his buddies, and Nefarious gets clandestine with the Cloaker.) Your weapon wheel is mapped to the right analog stick, which can be awkward at first, but the on-screen action appreciatively freezes while you’re searching for the right tool of destruction.

Experience and bolts, the currency for getting upgrades, are tethered to specific characters on a console, allowing you to invite your friends over to help level up all the characters on a monster campaign. Unfortunately, if a new player joins later in the game with a character that has yet to be played, they’ll start with no banked bolts, equipped with just a measly Combuster blaster at their side. This is a kid-friendly game that sometimes doesn’t play fair. It doesn’t help that bolts aren’t divided evenly at the end of each level. (Previous Ratchet & Clank games would upgrade weapons through use.) When you’re playing with friends, you’ll find yourself sucking up the crates scattered throughout each level before engaging foes.

The first time I played through the game I went solo. That can be quite hard since you just have a bot assisting you during battles and kid-friendly Portal–esque puzzles. The AI will occasionally snag on the environment, but that’s easily fixed by trekking toward them and pressing triangle or square. In later levels, you’ll have to be careful that your glitching bot doesn’t die too much, because if you perish at the same time you have to start that section of the level over. It’s not a deal breaker, but certainly an irksome concern.

Almost every boss encounter will likely see your friends resorting to their Combusters for quick overloads (read: big, satisfying slow-mo explosions). Those high-velocity fireballs of superheated plasma can’t be beat, folks. All 4 for One is still one hell of a charmer in the comedic areas. The wisecracks during the beautifully animated cutscenes made me guffaw a few times, and robotic mercenary Mr. Zirkon’s one-liners are always a joy.

The story is pretty simplistic. It opens up with the blundering President Quark accepting the Tool of Justice Award. Unrelenting villain Dr. Nefarious tries to exterminate Ratchet’s friends, but is interrupted by a mysterious space force called the Collector. The new baddies let loose a hulking creature on Luminopolis. Before long, the unlikely team set to defeat the beast and thwart the Collector’s plans to harvest the galaxy’s cute creatures for evil plans. The Avatar-meets-Star Wars through line is quite fun while it lasts.

The variety of enemies is also surprising. Insomniac really went to town with the baddies and paces the dissimilar gameplay elements quite well. Some memorable experiences include a waterskiing boss battle on Octonok against a huge ravenous fish, sliding down a frozen mountain, piloting jetpacks up and down mechanical shafts, and transporting a power crystal through a dark forest filled with huge killer plants. Also, using the Vac-U-4000 to suck up bolts and toss teammates across gaping crevasses to progress through levels is a blast. It fits in well with Insomniac’s well-crafted and well-loved universe. On top of that, music composer Michael Bross turns in a rousing score for blowing shit up.

All 4 One could have been a DLC game and fared much better. It’s a light, Mac n’ Cheese-type experience the whole family can enjoy. The 12-hour co-op mission has a few technical flaws, but fans wanting to extend their Ratchet & Clank experience will squeeze some fun out of the game. Just don’t expect the same sprawling action-shooter adventures you’ve grown accustomed to with this brand. If that’s the kind of depth you require from everyone’s favorite Lombax and his hilarious crew, perhaps it’s best to wait until a price cut on this title. Otherwise, pick this up for your next intergalactic pizza party.