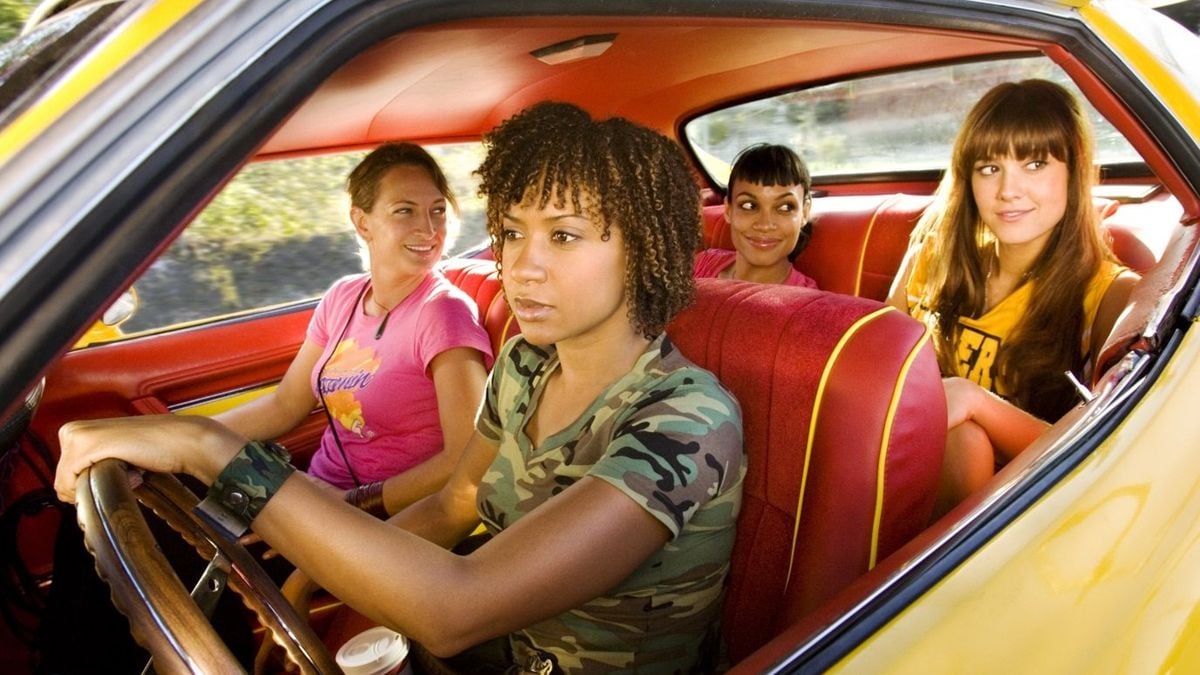 Cars, it’s often been observed, offer a sort of contradiction of motion: They allow us to move around while sitting still. It only makes sense, then, that the movies have for so long been attracted to the allure of the automobile, for surely the appeal of the cinema lies in its capacity to take us from the comfort of the theater or living room to adventures around the world. The greatest car movies—movies about cars, largely set in cars, or otherwise significantly concerned with them—understand that our affection for our vehicles has as much to do with the possible freedoms they promise as the routines they let us uphold. Cars drive us to and from work every day, keeping our lives precisely ordered. But they also suggest escape: We’re always aware, faintly, that we could drive away from it all at any moment, out and off toward some new life’s horizon. Car movies remind us of the power in that possibility—of all the things that can happen when we turn the key.

Death Proof ranks among the best of Quentin Tarantino’s work because it engages with the world not simply through the cinema, but as cinema—his one area of expertise. Without politics or history weighing it down, Death Proof feels freed up to have fun with the car movie, to play around with conventions Tarantino has spent a lifetime digesting and knows more intimately than anybody. It’s been dismissed as “merely” a genre exercise, but in retrospect that simplicity, even purity, proves its greatest strength: Part fond tribute, part postmodern riff, the film remains a valuable contribution to the form.

It’s difficult to overstate the influence and importance of the central car chase in Bullitt, which has persisted for nearly half a century as the preeminent model and the standard against which all other car chases continue to be compared. But what’s even more remarkable about the film’s rubber-burning pursuit through the hills of San Francisco is how vital and exhilarative it still seems to modern eyes: Far from simply a relic of cinematic history, the scene feels fresh and alive, no less potent in its bracing physicality than it must have been in 1968.

The 1970 Dodge Challenger R/T in alpine white. It is, and forever will be, the Vanishing Point car, rechristened and emblazoned across the popular imagination by Richard C. Sarafian’s legendary film. Barry Newman’s fated cross-country road trip boasted all the requisite features of post-Bullitt car-movie lore, from elaborate stunt work to flourishes of high-octane action, but the tenor of Vanishing Point suggests something rather more muted, even despairing, as if Sarafian’s real interests tended away from fist-pumping theatrics expected of hard-boiled men hauling ass across America and toward something more existential.

It’s the widescreen composition, rather than ’55 Chevy, that proves the defining feature of Monte Hellman’s Two-Lane Blacktop, a car movie and a road movie equal parts searching and sad. The endless sprawl of Route 66 is flattened by the lens into a purgatory of American ennui, the world around the heroes such a void that even the interior of their car, in Hellman’s view, seems about to swallow them whole. Stripped down, streamlined, and reduced to its essence, Two-Lane Blacktop finds the framework of the road movie furnished with the anxieties of an American struggle to make it out of the ‘60s with its identity in tact.

Leave it to Alex Cox, maverick punk auteur, to contemporize the ‘70s car movie for the 1980s by scaling back the angst and cranking up the weird. Hard drugs, Kiss Me Deadly, glowing cars, space aliens, televangelists, Black Flag: Repo Man is a pop-cultural sponge soaking up the detritus of a burnt-out America, not unlike Gremlins (released just three months later), but without any pretense of catering to middle-class family values. The thesis? Emilio Estevez watches his ex-hippie parents melt away into the comfort of televised religion, giving up their life savings for the promise of quick-fix salvation. That’s 20 years of American culture in a nutshell.