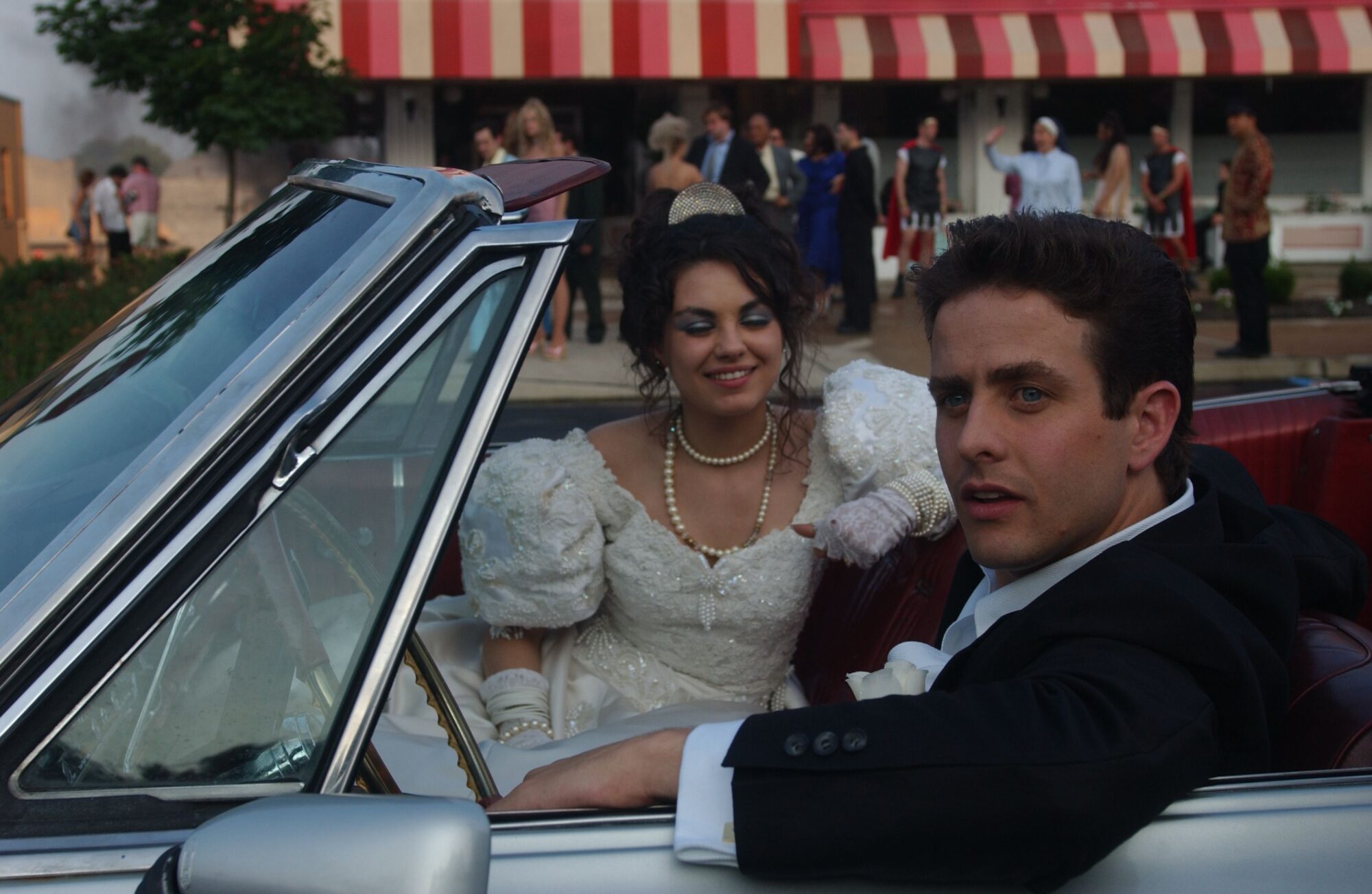 “How’m I gonna get troo dis widdout medication?” asks the mulleted (but prescient) drug-dealing best man in the relentlessly unfunny detonation of Tony n’ Tina’s Wedding, a long-running Off Broadway audience-participation farce. Freely adapted, not into a peopled installation or video game, but implausibly intrusive POV celluloid shot by the nuptials’ self-described documentarian, this hateful shoutfest employs stunningly bare-bones archetypes (Italian-American and otherwise: mincing brother, incontinent elder, black Catholic priest preaching in rolling Baptist cadences), frequently without adding any discernible jokes, eccentricity, or character. Setting the action wishfully in the hilarious year of 1988 for hair and fashion points, writer-director Roger Paradiso throws a pall of desperation and contempt over his throng of caricatures before they even leave the church. Captive at an ancient Rome-themed reception hall with leopard-patterned doors, the callow couple shoot like pinballs between her shrewish mom, his strip-club-operating dad, and boorish friends. Joey McIntyre looks trapped and docile, but Mila Kunis pumps up the volume perhaps too naturally. “That’s a great fuckin’ toast,” she slurs with brio when a bridesmaid tearfully offers that she’d eat Tina’s vomit. That the profanity delivered at a Mamet-like rate couldn’t sound less authentic is no anomaly in this tin-eared disaster. When the hapless caterer/comic takes the mic to deliver Jew-baiting one-liners, they’re not bad enough. Despite the eventual appearance of fire, the fatal car accident from Robert Altman’s A Wedding is regrettably not expanded into a 20-car pileup here. As Tina’s buzzed, heartsick ex-boyfriend, it’s up to a pre-Entourage Adrian Grenier to sit his sweet, skivvies-clad butt on the cake for an anticlimax to this nearly four-year-old film, one Ari Gold presumably lacked the clout to suppress forever. Much less amusing than any wedding, bris, or autopsy you’ve ever attended, Tony n’ Tina’s Wedding uncharacteristically stints on mobster material (that was a different interactive wedding play) but may draw the wrath of activists who monitor crimes against comedy.