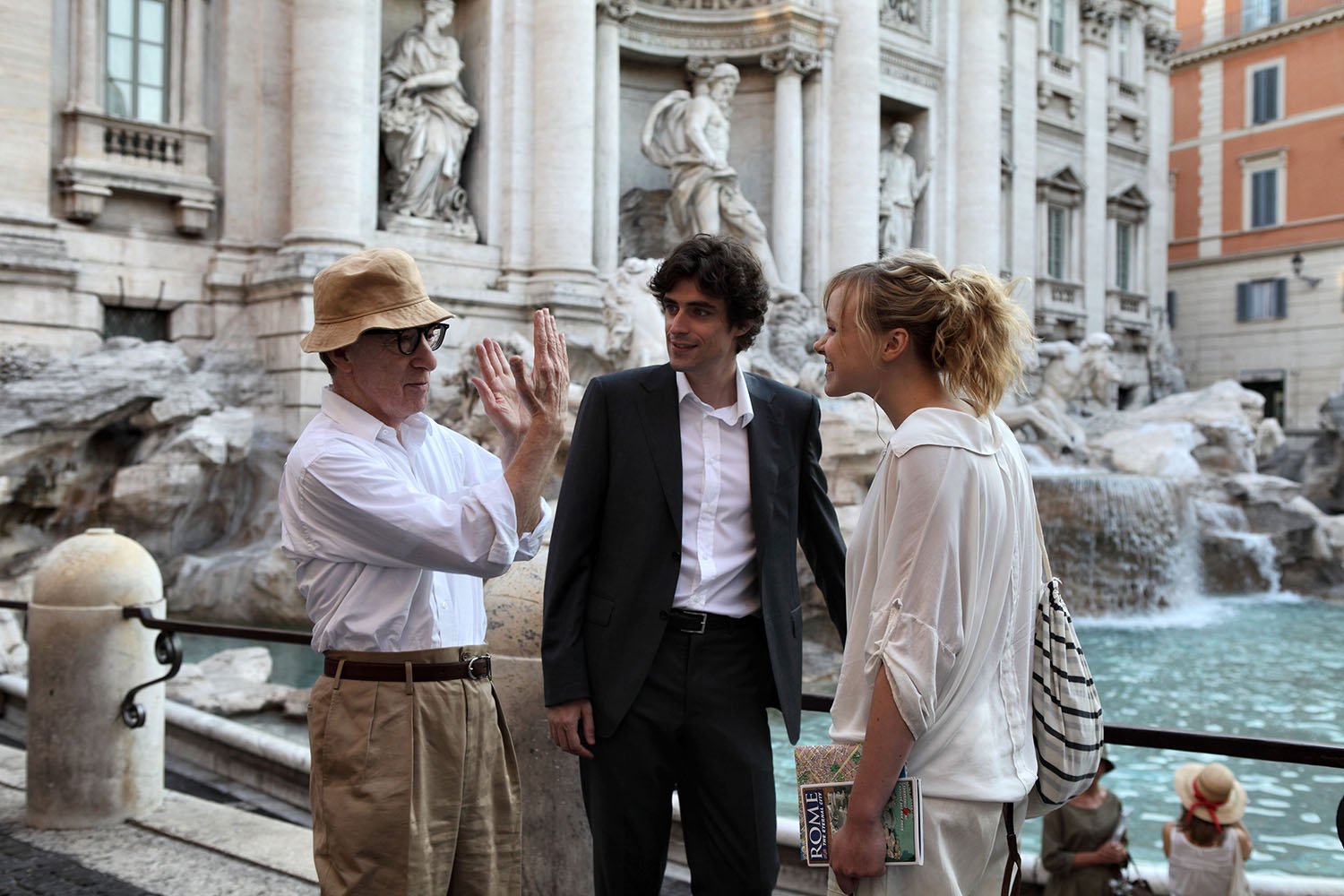 There’s something highly appropriate about sitting before an all-star dais at the press conference for Woody Allen’s latest, To Rome with Love. More than just another valentine to a foreign city, the film is a droll and buoyant commentary on fame, much like Allen’s Celebrity was 14 years ago. Its four simultaneous storylines concern an ambitious young architect (Jesse Eisenberg) wooing an actress (Ellen Page) easily seduced by A-List glitz, an impressionable bride-to-be (Alessandra Mastronardi) besotted with the superstars of Italian cinema, a retired American opera director (Allen) determined to bring success to a simple mortician (Fabio Armiliato) with a booming tenor’s voice, and a gangly everyman (Roberto Benigni) who wakes one day to find himself inexplicably swarmed by paparazzi. It’s all very much akin to the bustling scene in a Park Avenue hotel ballroom, where Allen, Page, Mastronardi, Penélope Cruz, Greta Gerwig, and a post-photog-scuffle Alec Baldwin are bombarded with questions and camera flashes. Star worship is one of many key topics of the day, particularly when it comes to Allen, who receives no shortage of adoration from his actors.

Eager and eloquent when not brooding with lips pursed, Baldwin declares that Allen is peerless and “on his own island in terms of filmmaking.” He adds, “With Woody Allen, you have someone who is responsible for more memorable moments on every level—writing, producing, directing, and acting—than any other person who’s ever lived in film, really. Woody Allen’s less successful efforts are better than most other films you see. And when you see the greatest films he’s made, they’re some of the greatest films ever made. So when he calls you and asks you to do this for him, and you’re available, you go. You want to hitch a ride and be a part of it.”

Cruz, who’s by far the most breezy star on the panel, her smile beaming and her chin often resting in her palm, speaks of Allen in the same way that she extols Pedro Almodóvar—like a giddy fan with a heap of the auteur’s DVDs at home. “I’ve always tried to look at him and forget all the admiration and all the beautiful moments I’ve experienced watching his work,” Cruz says, prompting Allen to offer a playful headshake of faux arrogance. “Because if I didn’t try to put that aside and do what I have to do, I would be starstruck the whole time. It still happens to me when I’m with him. I find him so fascinating. I’m lucky that I get to be directed by him, but I’m also lucky that I get to hang out with him and hear him speak. He makes me laugh all day long.”

Gerwig surely isn’t the only fan to stock her cultural archive thanks to Allen’s in-text citations. If Allen is first a wildly prolific artist worthy of unabated reverence, he is second a deliverer of quippy cultural CliffsNotes, which he’s handed to audiences in everything from Annie Hall to Midnight in Paris, a film that teemed with broad sketches of the 20th century’s most influential creative icons. To Rome with Love, Allen’s inevitably scrutinized Midnight in Paris follow-up, features yet more culturati fodder, particularly via Page’s name-dropping and poet-quoting starlet, whom Baldwin’s character, a half-magical tourist reliving his own past, almost self-reflexively mocks as a corner-cutting phony, who knows just enough about Rilke and Gaudí to seem sufficiently enlightened. Allen insists there are no pretenses or delusions behind his penchant for literate themes and references, and nor has he been on a personal quest to broaden the minds of viewers. Conversely, he’s merely dishing out what’s always made him laugh.

“I just find that stuff funny,” Allen says. “I’m not an intellectual at all, but I find intellectuals amusing. So when I write, I write about them in comic dilemmas and comic situations. If I was pressed as an intellectual, I’d be dead. But as a writer, making jokes about them, I can do that. For whatever reason, whatever accident, I happen to find that part of the social milieu amusing, and it all seems to come out inadvertently in everything I do.”

For a man who avoids the center-stage pageantry of accepting Academy Awards, Allen is a markedly candid and comfortable target for the press, and his laidback, layman’s responses support his self-professed stance as a non-intellectual. He’s self-effacing to an almost suspicious fault, as if he’s trying a bit too hard to crack some presumed perception of ego, but what he has to say seems genuinely uncomplicated, and it repeatedly dismantles today’s most common inquiries about his career. Why does he continue to shoot abroad? Because it’s cheap. Are Cruz and Scarlett Johansson his new muses? No, that’s silly. Does he know why Midnight in Paris was his biggest financial success? Not a clue. The 76-year-old is at his most amusing when wryly skewering his own craft, in a rant that, however exaggerated, activates the familiar persona he dons whenever starring in his own work.

“I start off with very great ambitions,” he says. “I want to make Citizen Kane. And I shoot the film, and then when I get into the editing room, I realize that I screwed up, irredeemably. I edit the film in any configuration that will avoid embarrassment. I put the beginning at the end, take the middle out, change things. The editing process becomes the floundering of a drowning man. I go in there, and I have various themes, and I’m gonna edit this thing like it’s Potemkin or something, but it doesn’t work out that way. I’m just in there selling out left and right, just losing every ounce of integrity I have and trying to survive.”

Allen may remain lighthearted about his efforts, eliciting plenty of knowing laughs from his interrogators, but his modest cracks can’t burst the bubble of earnest respect that hovers over the press event from start to finish. The venue is loaded with people visibly affected by his presence, their faces not unlike that of Mastronardi’s Rome-perusing cinephile. To share space with a gorgeous talent like Cruz is lovely and surreal, but to be in a room with Allen is something else entirely. Chatting up an old friend in a refreshments lounge just after the conference, he gets ogled like he’s some lasting, vintage machine behind invisible velvet ropes, his interior moving parts grinding away incessantly. Is the next Crimes and Misdemeanors being generated in there? Or just one more Curse of the Jade Scorpion?

That’s another hot topic Allen humbly swats away: his staggering productiveness, which has yielded more than 40 films in as many years. True to form, he says his boundless tales naturally present themselves, and his knack for filling in narrative holes is simply a matter of genetics.

“It’s not as grueling as you think,” he says of his annual output. “In the course of a year, you make a film and things happen. You read the newspaper, you live your life. And it occurs to you that there are many potentially interesting stories. I read stories about other people, and I usually make notes on scraps of paper. Other times I’ll think of a full story spontaneously. If I don’t have anything, I’m good at forcing the issue, because I used to be a television writer years ago, and you had to have a show ready to go into rehearsal within days. You couldn’t wait for your so-called muse to visit you. So I can do that. I can sit and think and drum up something. I can’t do anything else, but I can do that. It’s just an accident of birth—that I can come up with stories.”