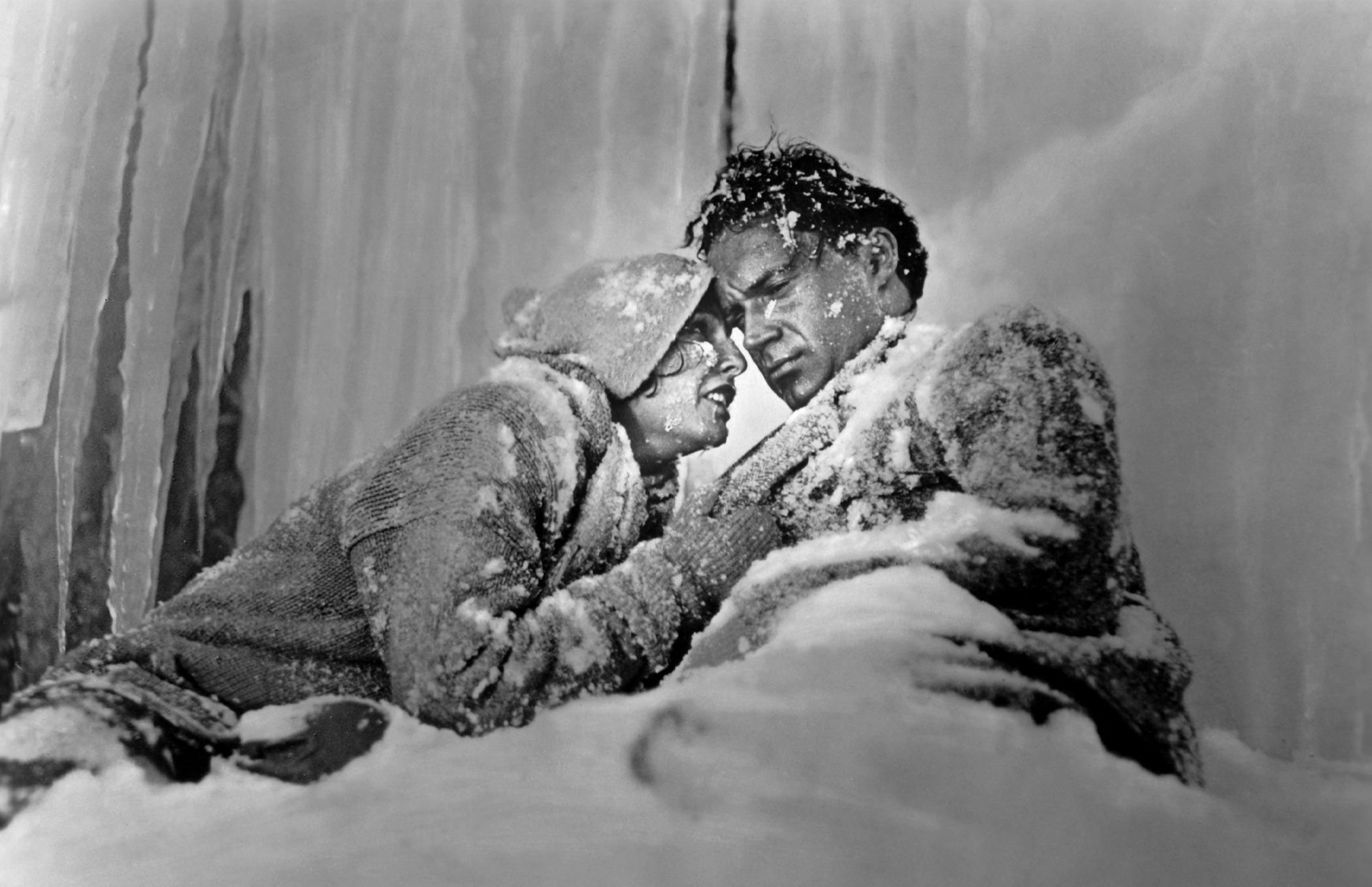 While the Mabuse spy thrillers would later be molded (and shrunk) into Bondian escapades, the mountain film—Weimar Germany’s other staple genre—would scarcely survive the end of the regime and the arrival of sound. The White Hell of Pitz Palu sums up the romantic motifs of the genre invented by geologist-filmmaker Arnold Fanck, though the film’s superiority to most of the movement’s other entries might be due to the presence of G.W. Pabst, who shares directing duties with Fanck. Still, as the credits pronounce, it is a film “by” Fanck, whose fascination with vast, alpine beauty is evident from the opening shots. Cocky Dr. Johannes (Gustav Diessl) climbs the eponymous glacial peak and laughs at Nature, only for Nature to laugh back—an avalanche claims his wife and Johannes is reduced to a pensive shadow of his former self, grimly roaming the mountains for her body. Years later, he bumps into Maria (Leni Riefenstahl) and Hans (Ernst Petersen), a newly engaged couple who promptly join him in his journey toward Pitz Palu. The setup suggests a rehash of Von Stroheim’s merciless triangulation in Blind Husbands, but survival takes precedence over romance once the trio gets pinned down in the icy face without supplies. It’s easy to see here the mysticism of purity that will fuel Riefenstahl’s later work as a director, particular her collaborations with the Nazi Party, yet the film is more earthbound, less dreamlike than Riefenstahl’s own mountain epic, The Blue Light—where her camera seeks out perfection of line, Fanck and Pabst prefer rugged verticals and sudden shadow patterns. Nature here can shift from ethereal to ominous in a heartbeat, so it’s no surprise that the film vacillates from a sense of wonder toward the voluptuous expanses to a need to conquer them. Striking pictorial moments abound (a torch-bearing expedition into the glaciers is staged as a chilly infernal descent), yet, like much of its ilk, The White Hell of Pitz Palu suffers from monotony and laboriousness. Fritz Lang achieved truer awe in Woman in the Moon that same year, though Pabst, who had already aided Greta Garbo and Louise Brooks into screen sublimity, understood that snow-covered behemoths have nothing on the human face—accordingly, and movingly, the most spectacular shot remains a close-up of a tear forming in Riefenstahl’s terrified visage.

Review: The Young One