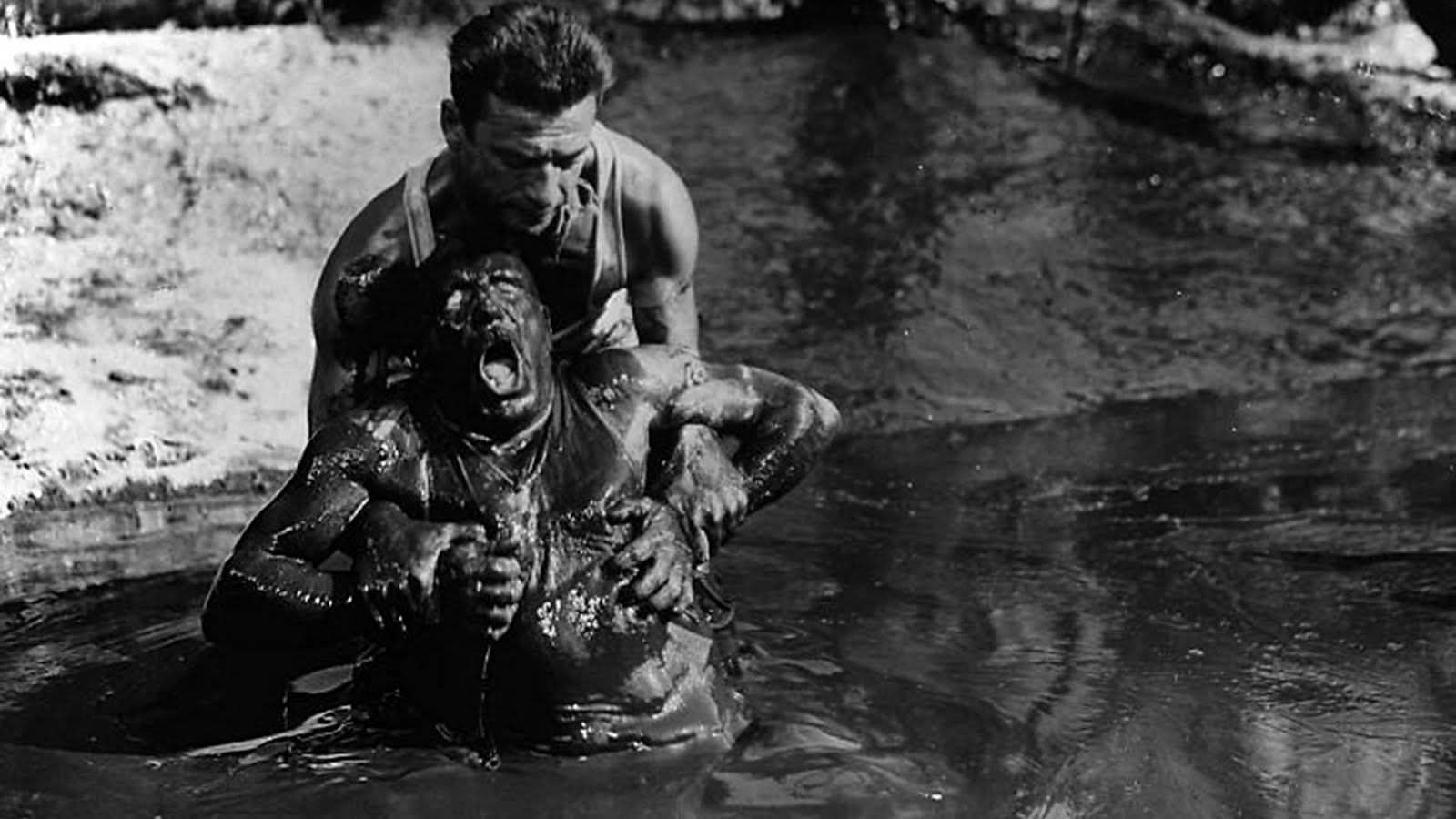 Awarded the Palme d’Or amid much mouth-frothing from the American press over its alleged communist credentials, Henri-Georges Clouzot’s The Wages of Fear now seems much less like Salt of the Earth-as-a-potboiler and a lot more like the spiritual godfather to every testosterone-fueled thrill ride since. Time has inevitably eradicated the contemporary circumstance that fed its political reception and modern audiences will surely recognize that howls of anti-Americanism said more about the accuser than the accused. If anything, the film now registers as the callous post-WWII flipside to Casablanca, in which people have been scattered into pockets of nobility as well as outposts of pusillanimity.

The Wages of Fear opens in Las Piedras, a parched, godless shantytown in South America that’s dominated by an American corporation, Southern Oil Company (SOC). Clouzot unhurriedly introduces a rogue’s gallery of international losers that even the Nazis in Argentina wouldn’t have: They spit, steal each other’s clothes, pet women like dogs, and all pine for the chance to scrape together enough bread to make their journey back home, where hopefully everyone has forgotten whatever they did to necessitate their dislocation.

For Mario (Yves Montand), Jo (Charles Vanel), ex-Nazi Bimba (Peter Van Eyck), and poor Luigi (Folco Lulli) with his cement-caked lungs, that chance comes when one of the squatting oil conglomerate’s rigs ignites, killing some of the village natives. The unwelcome interlopers take the oil company’s fat paycheck to drive a pair of big rigs across a treacherous couple hundred miles to the fire. Their job becomes a grueling journey across a minefield, only the mines are strapped to the insulated flatbeds of their trucks: They’re to deliver massive payloads of nitroglycerin to the site so crews can detonate and extinguish the burning pyre.

Clouzot’s inhuman touch was made for a scenario like this. Unlike his later Diabolique, which needed at least some semblance of an empathetic core to justify its protracted “gotcha!” climax, Clouzot’s nihilism distends The Wages of Fear. (If Diabolique was his bid to out-Hitchcock Hitchcock, The Wages of Fear is a little bit like a Howard Hawks thriller, only without the mitigating presence of women.) Literally and figuratively, the main characters are lost souls propelled forward not by their belief in the mission, but rather because there’s no other choice but death, either in Las Piedras or holding the steering wheel of a mobile bomb.

When the men’s nerves begin to fray and their patience is repeatedly tested, Clouzot presents them without pity, and Jo in particular becomes a whimpering, flatulent jellyfish. (Vanel’s gutsy descent from Mediterranean brawler to paunchy bawler earned him a citation at Cannes as well.) Perversely, though, it’s Clouzot’s seeming lack of empathy that allows the four of them to emerge as humans. Sure, they’re cowardly, desperate, and merciless in their pursuit of that $2,000 ticket home, but by God and the Southern Oil Company, they’re alive. Just.