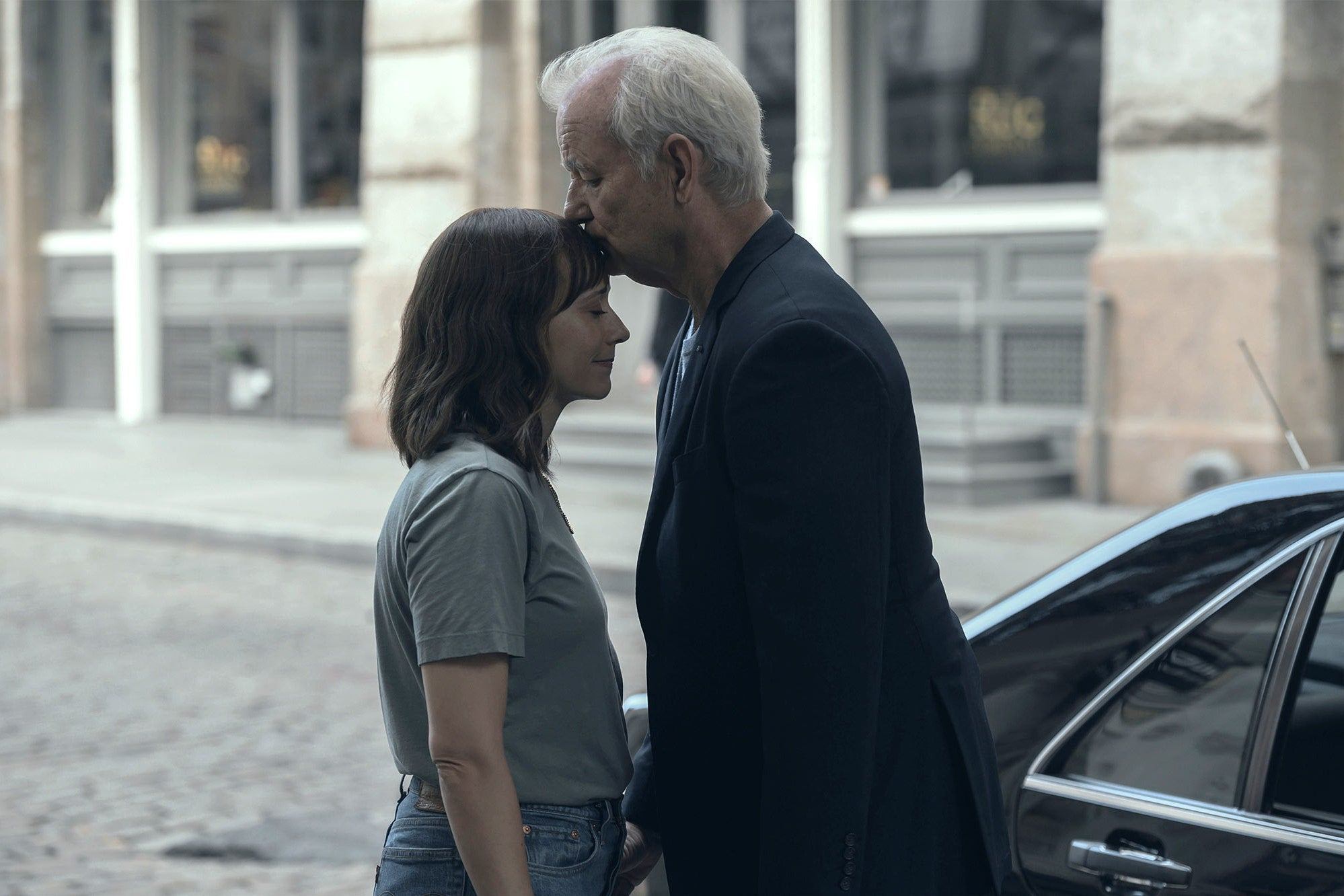 There are few modern filmmakers who possess Sofia Coppola’s gift for capturing how our idealized, movie-fed ideas of “night life” reflect our longing for adventure as well as our loneliness. Her latest, On the Rocks, has the same piercing, hazy, noir-esque beauty as Lost in Translation, Somewhere, and A Very Murray Christmas, as quite a bit of it is set in dimly lit hotels and bars that allow people to be anonymously captivating while getting loose on expensive cocktails.

Sitting across from one another, talking of their own relationship while pretending to speak of her marriage, Felix (Bill Murray) and his daughter, Laura (Rashida Jones), make for an enchantingly odd couple, their energies redolent of a classic movie duo, merged with the despairing yet droll preoccupations of a filmmaker who appears to be cutting to the heart of her own demons. Yet On the Rocks has a bounce—a swing and sense of hopefulness—that’s new to Coppola’s work. As Laura implies, endless passion is exhausting, expected only by the selfish. Somewhere on the sliding scale between combustible heat and resignation is something like grace, where communion is likely.

In conjunction with the release of On the Rocks, we ranked Coppola’s films. Chuck Bowen

Editor’s Note: This entry was originally published on June 23, 2017.

As this film’s Bling Ringers raid sprawling manses for McQueen sunglasses, Alaia dresses, and Birkin bags, Coppola responds with a propulsive collage of modern pop iconography, filling the screen with paparazzi shots, step-and-repeat footage, mock Facebook pages, and breathless montages of red-carpet stars who strut through these teenagers’ hollow dreams. Like Harmony Korine’s Spring Breakers (of which this film is most certainly a piece, right down to a girl tauntingly sexualizing a pistol), Coppola presents a cautionary tale of aural and visual aggression, backing her vast buffet of all-corrupting merchandise with floor-shaking tracks like Sleigh Bells’s “Crown on the Ground.” But whereas Korine’s film left room for an eerie wealth of implication, The Bling Ring’s main thrust grows repetitive and hits a wall of E! True Hollywood Story blandness, forcing viewers to look to the fringes for points of interest. R. Kurt Osenlund

The dollhouse restrictions that Coppola has set for herself cast a dirge-like pall over everything that eventually happens, combing the story—alongside her previous parables—into a kind of haunting collective feminist memory. Even held against the flashback-laden psychosexual hysteria of Don Siegel’s version, The Beguiled feels concise to the point of constipation. Lush with texture and atmosphere, each passing moment is opulently cinematic—and yet the overall assemblage comes off inorganic at best, taxidermied at worst. It would have been far riskier to ground the film’s narrative vantage with Edwina (Kirsten Dunst), Amy (Oona Lawrence), Alicia (Elle Fanning), or Martha (Nicole Kidman) and to keep it there. Instead, Coppola serves up a cautionary revenge tale told from multiple perspectives, and thus none at all. What results is her least audacious, and most conventionally respectable, work yet. Steve Macfarlane

Coppola’s follow-up to The Virgin Suicides is equally drunk on ethereal passages in time. Here, though, it’s not the difficult rift between adolescence and adulthood that her characters must reconcile, but a more expansive one between two cultures whose hang-ups are encoded in their respective pop landscapes. Bob Harris (Bill Murray) and Charlotte (Scarlett Johansson), not unlike the emotionally disconnected characters of Tsai Ming-liang’s What Time Is It There?, see their every disaffection reflected (literally and figuratively) onto the sounds and landscapes of the city they inhabit. The film’s allure is a self-consciously hip one, emanating from Coppola’s own fascination from the culture she photographs. This transfixion initially feels naïve, but that’s because Coppola doesn’t pretend to know Japan any better than her characters do. All the while, she lovingly evokes the film’s many spiritual awakenings via a mod palette that increasingly color-codes her characters to their surroundings as the story moves slowly toward its sad but enlightening final moments. Ed Gonzalez

Bill Murray has given many variations on defeated shells of men, but his work here is arguably most reminiscent of Lost in Translation’s Bob Harris. In fact, A Very Murray Christmas’s emphasis on the connection between strangers makes it something of a spiritual cousin to Coppola’s 2003 film. But it replaces Lost in Translation’s endless neon-encrusted cityscapes with a deceptively warm aesthetic and cramped hotel kitchens and bars. In so doing, A Very Murray Christmas takes subtle aim at pandering modern-day holiday traditions in which simulations of joy are the only form of currency. While some of the musical set pieces invoke classic Christmas songs, none have a particularly joyful vibe beyond the unspoken exchanges between characters that connect over their mutual loneliness. Nevertheless, A Very Murray Christmas doesn’t so much expose the Christmas season itself as fraudulent as it shines a light on the heightened sense of personal despair associated with the season that the manufactured holiday songs and television specials strategically ignore. Ted Pigeon

A faithful, vibrant Sofia Coppola adaptation of Jeffrey Eugenides’s novel about the unfathomability of teenage girls, The Virgin Suicides captures the album-rock ambience of mid-1970s suburban adolescent purgatory with just the right quantities of fetishism and pity. Edward Lachman’s sourball-candied cinematography and Air’s languid musical theme were key ingredients in this smart, regretful fairy tale of the failed rescue of a quintet of Michigan Rapunzels from their repressive parents by a chorus of clueless, telescope-equipped local swains. (It did free Coppola of her Godfather III acting albatross.) Will Kirsten Dunst ever again approach the pathos she stirred waking up alone on the 50-yard-line? Bill Weber

Sofia Coppola’s On the Rocks opens with a series of gestures that establish the film’s entire emotional framework. In a voiceover against a backdrop of darkness, a man tells his daughter—playfully but with an unmistakable edge of seriousness—that she will always be his, even after marriage. As Laura (Rashida Jones) becomes convinced that Dean is having an affair, her father, Felix (Bill Murray), eases back into her life after returning from a trip to Paris. Laura and Felix work their way through New York, with a side trip to Mexico, in order to find out if her husband, Dean (Marlon Wayans), is cheating on her—a screwball adventure that Coppola invests with richly unresolved, contradictory undercurrents. Their adventure is dotted with lovely curlicues, such as Felix prattling on while recklessly driving a sports car around New York until he’s pulled over by police offers whom he readily charms with his hail-fellow-well-met routine. Coppola, Jones, and Murray capture how such charm is both real and fake, affirming and demoralizing all at once. Bowen

Coppola is obsessed with Marie Antoinette’s pleasure, holding out her hand and contriving for her a series of mini revolutions (she claps, to everyone’s shock, after a court performance and, later, carries on an affair with a gorgeous and virile soldier) in order to hint at the girl’s desire to react against that which was preordained—to carve out her own space away from the busy hands of oppression. Cynics will reduce these moments to feminist fiddling, but they are, in fact, very humane considerations of the corset-like effect ritual had on Marie Antoinette’s will. The film is a great fashion show, but it also constitutes a great makeover—an elegy to frustration, where every color and sound evokes the longing and rapture of a girl who didn’t understand her adult responsibility. “Am I here?” the girl asks while playing the drinking game known to us as Celebrity. Her answer is implied later, when she bows to the barbarians outside her gate. It registers: “I am here.” Remarkably, Coppola doesn’t ask us to take Marie Antoinette as she thinks she was, but as she probably was: a little girl who didn’t know better. Gonzalez

Somewhere is a Hollywood film about Hollywood that completely ignores the rules of traditional narrative filmmaking, and of indie filmmaking: This experimental pop film stands on its own, peerless and without precedent, at least in the movies. And it’s only in relationship to music that I can position the film. With its sugar-pop harmonies created out of flowing waves of dissonance, Somewhere is like Nowhere, the 1990 album from the British band Ride that was a key work in the shoegaze movement—also known as “the scene that celebrates itself,” not unlike the criticisms often unfairly hurled at Coppola. The film kicks in with a hum; a low sound, like the sound of a car’s revving engine, rides underneath the rock song that accompanies the opening credits, enveloping and overwhelming viewers until they’re disarmed. Miriam Bale

Review: I Carry You with Me Turns a Gay Couple’s Search for Freedom into a PSA