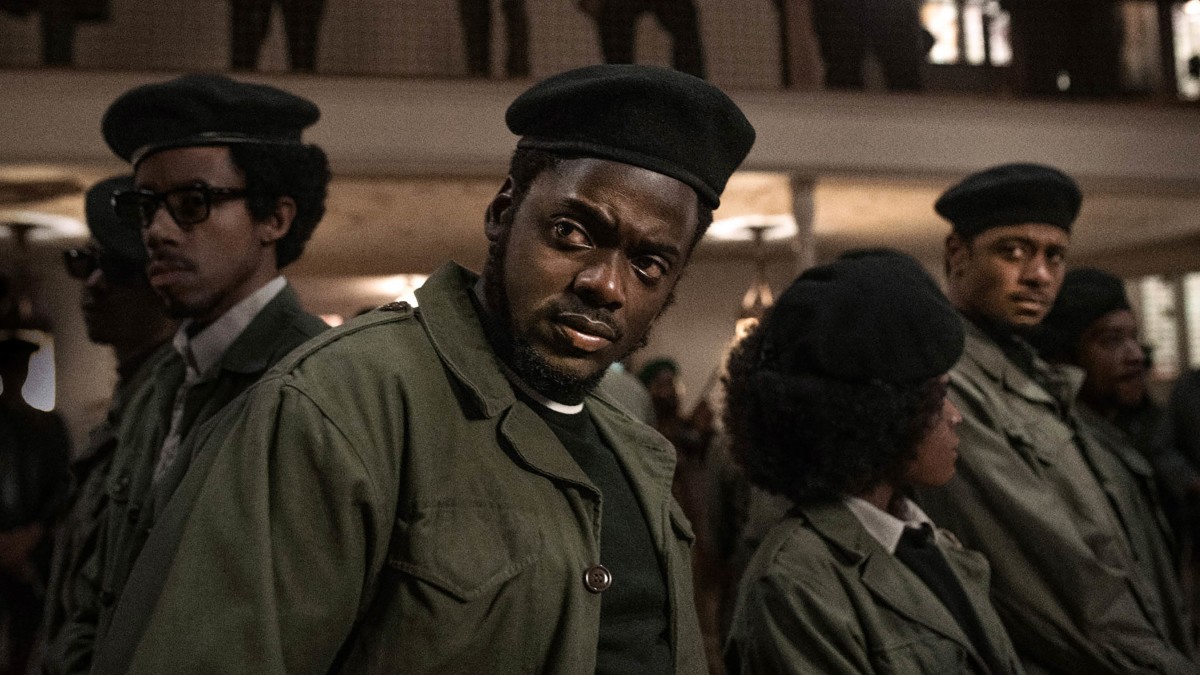 Fierce but mournful, Shaka King’s Judas and the Black Messiah serves as testament to a brief and revolutionary flare that was snuffed out before it could take hold. Unfolding during the late 1960s, when the Black Panther Party’s Chicago chapter was besieged by law enforcement, the film is filled with the high drama one expects from tales of heroes cut down before their prime. But because the drama is split between the story of that hero and that of his betrayer, King’s film complicates the expected narrative of martyrdom.

When we first see William O’Neal (LaKeith Stanfield), it’s 1968 and he’s threatening to arrest a bar full of gang members. He’s actually a car thief who found that a fake F.B.I. badge and fedora is a useful ruse. But his scam fails on this particular night, and soon O’Neal is arrested and made an offer by Roy Mitchell (Jesse Plemons), an actual F.B.I. agent: Spend a few years in jail or infiltrate the Black Panthers. Not surprisingly, the terrified O’Neal—who in real life was only 19 at the time—agrees to the task without any idea of what he’s just signed up for.

In 1968, the Chicago Black Panther Party was a tiny cell of activists operating in the orbit of their galvanic chairman, Fred Hampton, who’s played by Daniel Kaluuya with such an arresting vibrancy that it doesn’t take a leap of faith to believe that the man was able to bring entire rooms to their feet after just a few exhortations. First seen at a community meeting, Hampton wastes no time ripping apart incremental civic change, saying reform is just “teaching a slave to be a better slave” and mocking the Black Power activists’ attire (“That dashiki ain’t going to help you”). As a Mao- and Che-quoting socialist preaching a stirring gospel of black rebellion, it’s easy to see why J. Edgar Hoover’s F.B.I. had its eyes on him.

King and co-screenwriter Will Berson, using material drawn from the historical record, present the F.B.I. as rotten to the core. A few scenes in which an aging Hoover (Martin Sheen) rants about the dangers of a “black messiah” very capably and realistically capture the extent of his openly racist reactionary paranoia. As for the F.B.I.’s allies, the Chicago police are depicted as a loutish bunch who think nothing of hammering beers and blasting away at the Panthers’ office with shotguns. But while this film’s view of Hampton’s enemies is more specific and realistic than in something like Panther, Mario Van Peebles’s sloppier dramatization of the F.B.I.’s anti-Black Panther campaign, it wisely spends more time on their targets.

While Hampton’s visionary fire and brimstone provides the story with its thrilling uplift, O’Neal gives it the schizophrenic conflict that hauls it back to ground. Showing O’Neal as a young man with no idea of how to be a double agent and shoved into the middle of a war he had no idea was happening, Stanfield envelops his character’s confusion in a cocoon of misery that descends into self-hatred. Quickly promoted to head of security after proving his usefulness with a pool cue, O’Neal is soon driving Hampton all over Chicago and reporting his every move back to Mitchell. This gives him and us a prime seat for watching Hampton deftly work to stitch together an unlikely cross-racial proletariat alliance that he terms a “rainbow coalition”—a richly symbolic but elastic term appropriated later by other Chicago politicos.

The film is at its most gripping when it shows Hampton stitching this coalition together with a fiery conviction and supple logic that Kaluuya delivers with white-hot charisma. Whipping up one crowd after another, whether angry whites in a room emblazoned with a Confederate flag or an auditorium full of armed black gang members, he works to convince them all that no matter their race they are all poor and all oppressed by the same institutional forces. Cutting back from these scenes of attempted racial solidarity, the film shows an increasingly confused O’Neal—whose morose bafflement Stanfield turns into soul-searching tragedy—being told by Mitchell that, in fact, the Panthers were just as violent and no different than the Klan.

Though Judas and the Black Messiah valorizes many of the Black Panthers’ ideals, it’s also clear-eyed about what a fragile operation it was. When Hampton goes away to prison around the film’s midway point, the party quickly falls into chaos. That chaos was of course exacerbated by the nonstop war waged against it by law enforcement, which is depicted here as a spiral of shootouts between Panthers and the cops that have taken on the tone of personal vendettas. No matter much Hampton tries to focus his people’s attention back to his passions—the free breakfast program and medical clinic—they’re captured by the drama of violence. “Is the party about me or is it about the people?” Hampton asks in exasperation. The film’s gutting finale provides one possible answer: It’s the one Hampton didn’t want to hear but the one that the men who were pulling O’Neal’s strings made certain came true.

Review: Censor Lacks Transgressive Conviction for an Ode to the Video Nasty

Review: Earwig and the Witch’s Story, Not Its Animation, Is Its Undoing