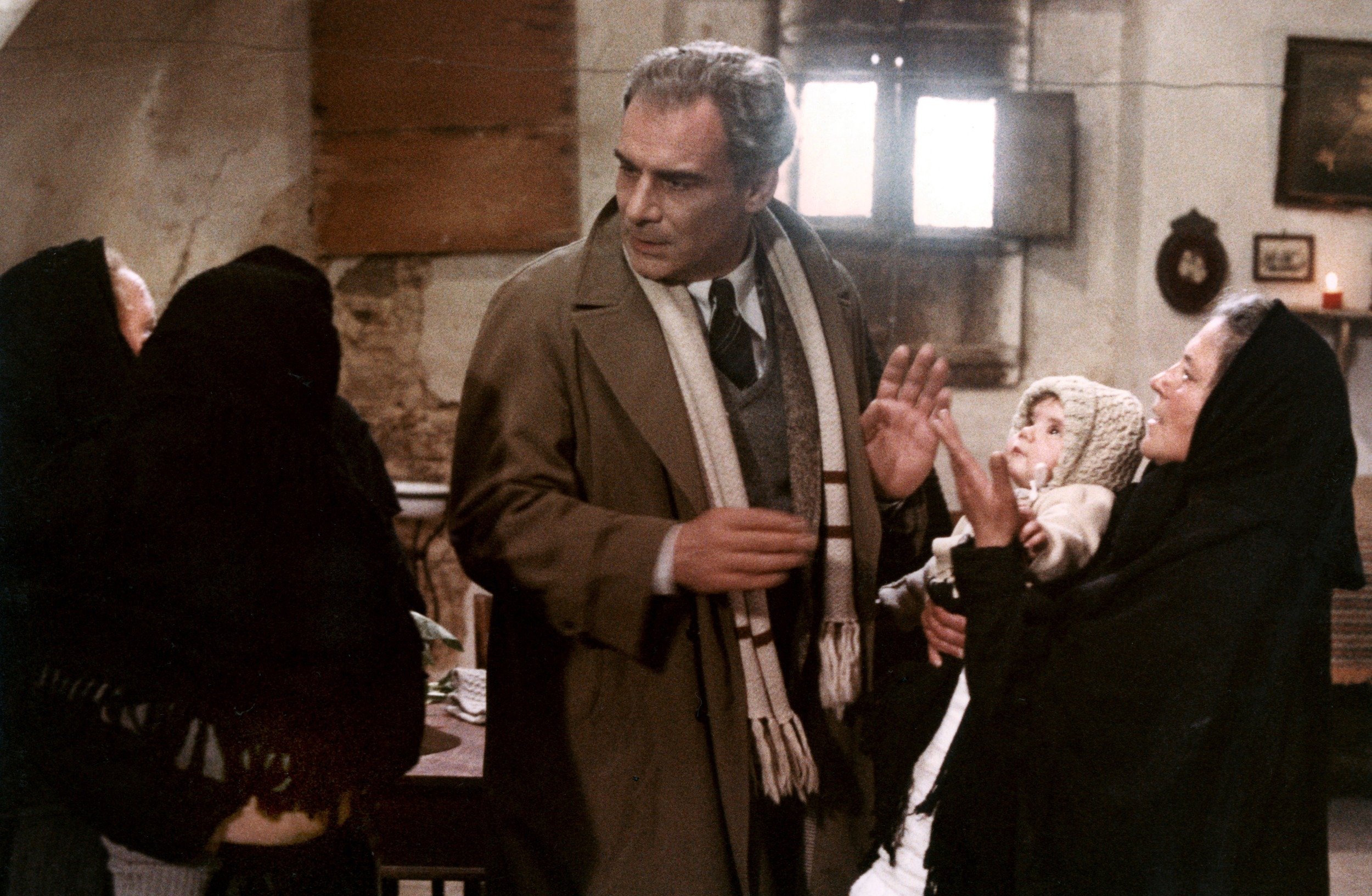 Arrested by Benito Mussolini’s fascist regime for some manner of ideological nonconformity, the painter and medical doctor Carlo Levi (Gian Maria Volontè), Christ Stopped at Eboli’s main character, is sent from his native Turin into “internal political exile,” in a village in the southern Italian province of Lucania. The impoverished Lucania, as Levi puts it, is a timeless space, a “dark land without sin or redemption.” Particularly given the nationalist ideal of the nation as home, such an internal exile is oxymoronic. Is there a place within the nation that’s actually outside of it? A town in which it’s impossible to distinguish between those whom the law has punished and those it’s merely neglected?

The opening episode of Francesco Rosi’s four-part film plays like a less enthusiastically surreal version of the classic TV show The Prisoner: A man finds himself trapped in a village for an unspecified crime, surrounded by people who are variably other prisoners, residents, and agents of the fascist enemy. As in the British spy show, there’s even an indistinct boundary Levi cannot cross, a condition of his imprisonment. But it’s a local brigadier, not a giant canvas balloon, that chases him down when he tests it. And the tone of Rosi’s film is more one of somber reflection than political intrigue: Levi strolls rather than runs toward the edge of town, and he’s likely to politely ask the local mayor (Paolo Bonacelli) for permission first.

Christ Stopped at Eboli is based on the memoirs of the real-life Levi, who brought the social decline of Italy’s southern provinces into the national spotlight with his account of his year as a prisoner in Lucania (now Basilicata). In the film, the left-leaning Levi expects to encounter nothing but misery and ignorance in his open-air prison, but he eventually becomes more empathetic to the locals’ conditions. The region resembles an exploited colony, where the only paved roads lead out toward the province’s capital, and taxes are collected from peasants whose only belongings are goats and loose furniture. In the midst of Mussolini’s ultimately disastrous bid for imperialist expansion in Abyssinia (today’s Ethiopia), supposedly on behalf of farmers who need more space, Levi discovers a community that has more than enough of it but lacks infrastructure and population, having lost many residents to emigration.

Beyond Levi’s gradual shift in perspective—most apparent in the way he initially demurs at the villagers’ request that he serve as their doctor but eventually pressures the mayor at great risk to allow him to practice—Christ Stopped at Eboli doesn’t overly psychologize the man. Levi serves the narrative much more as a cypher, a mobile gaze exploring various scenes from the cramped hillside town. Voiceovers, like the one that gives the film its title (in Levi’s overwrought metaphor, Christ allegedly stopped at the adjacent province of Eboli, never actually making it to Lucania), sometimes put us in Levi’s head, but especially early on he’s something of an unreliable narrator, far more condescending toward the village than is Rosi’s camera. The director’s languorous form of neorealism lingers on highly composed vistas and interiors that precisely split the difference between beauty and decay.

The cloud of fascism and war hangs over the community, depicted through radio broadcasts of government speeches that seem to fill the air of the town, but as Levi discovers, the non-prisoner residents of Lucania were abandoned by the very project of Italian nation-building in the 19th century, not by the nationalist modernism of the fascists. Not too heady a dive into national-historical politics, though, Christ Stopped at Eboli speaks the phenomenological language of the European art film of the 1960s and ‘70s, its long takes of elliptical interactions in real social spaces bringing to mind Michelangelo Antonioni or Luchino Visconti’s portraits of the nature of time. (Visconti and Rosi were frequent collaborators.)

Another influence may be Luis Buñuel, whose 1932 pseudo-documentary Land Without Bread used actual footage of Spain’s poorest region to savage the Spanish bourgeoisie’s own internal colonial gaze. Among the most memorable moments from Christ Stopped at Eboli are its sudden shifts from its post-neorealistic mode to a distinctly surrealist interest in the villagers’ proximity to death. Every so often the film’s apparent commitment to a material reality is undercut by nightmarish images like the abrupt cut to a close-up of a dead goat’s face hanging over the edge of a table, undulating as an unseen butcher cleans it, or the discovery that Levi has opted to nap in the shade provided by an open grave.

Such moments don’t feel incongruous with the whole of Christ Stopped at Eboli, which is comprised of a confluence of different gazes and voices that seek to understand or articulate the truth of the village at the center of the film. With the exception of an unnecessary framing device in which an aged Levi contemplates his paintings—set in the contemporary moment of Christ Stopped at Eboli, it’s all mood lighting and melodramatic zooms—Rosi manages to meld these various voices into a humanistic exploration of Italy’s “southern problem” and a thorough indictment of nationalist and imperialist agendas.

Review: Emilio Estevez’s The Public Has Its Heart, If Not Its Head, in the Right Place

Review: Unicorn Store Is a Jejune Celebration of Not Having to Grow Up