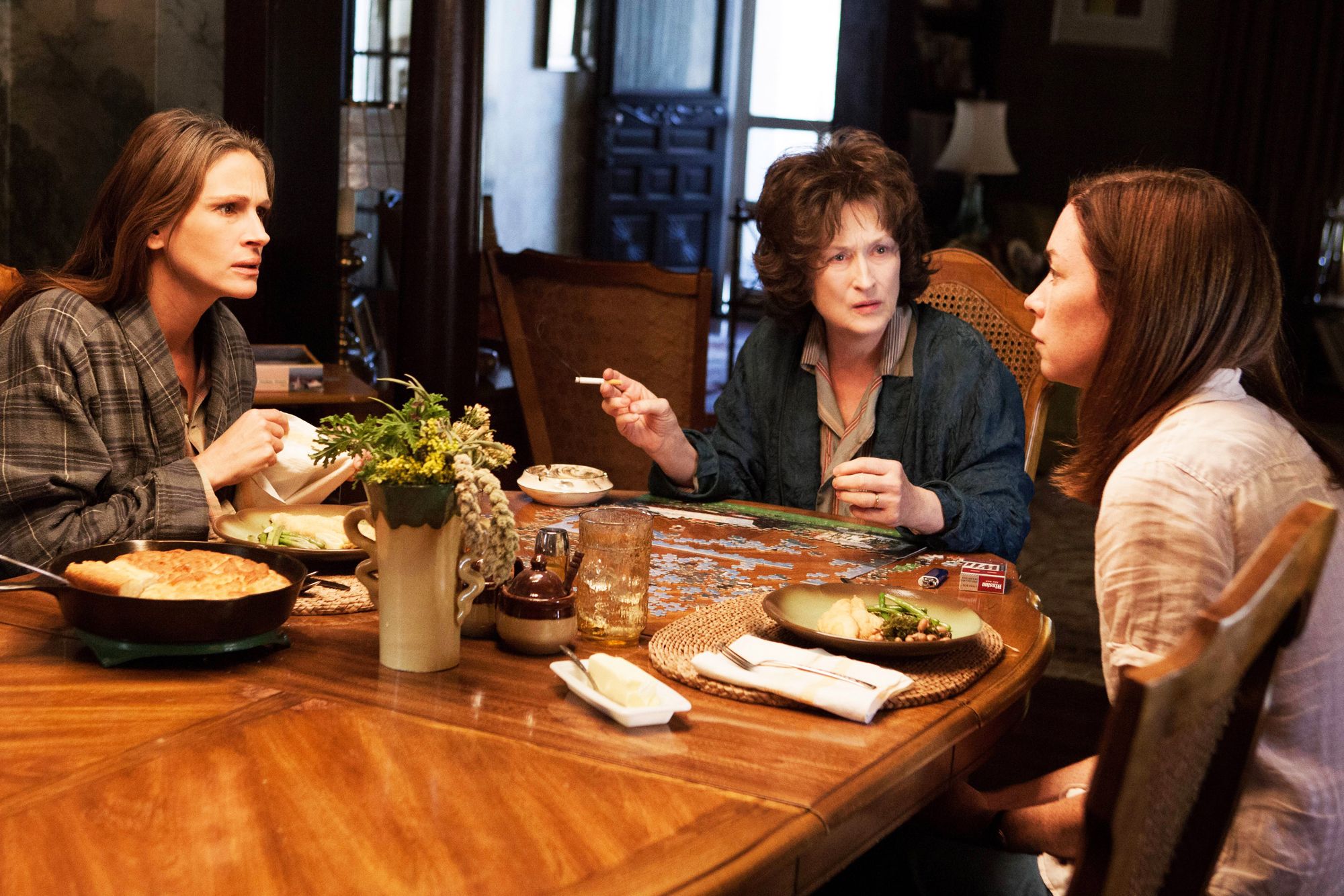 A funny thing happens during the course of August: Osage County, a film many would label as this year’s Meryl Streep awards vehicle. Though Streep, who plays the story’s drug-addled matriarch, Violet Weston, has ample moments of alternating grief, delusion, vileness, and humor, all delivered in a swirl of characteristically calculated theatrics, it’s Julia Roberts who walks away with this thing. Playing Barbara, the one of Violet’s three daughters who’s most distanced from, yet most similar to, her warts-and-all, “truth-telling” mom, Roberts is gifted some of the greatest language in this adaptation of the play by Tracy Letts, who won a Pulitzer and Tony Award for his efforts before shaping his work into a screenplay. In the rare role that actually demands she exude more fire than glee or grace, Roberts brings just the right amount of harsh, poetic cynicism to lines like, “Thank God we can’t predict the future; we’d never get out of bed.” The key bit of dialogue, though, comes just after the film’s resentment-baring emotional peak. Gathered around her mother’s table with her sisters, her aunt, her uncle, her cousins, her daughter, and her two-timing husband to commemorate the death of her father, Beverly (Sam Shepard), Barbara finally tackles Violet to the ground, fed up with the woman’s rant-fueling pill abuse, which may well have prompted Beverly’s apparent suicide. “I’m running things now!” Barbara barks at Violet while snatching a bottle of painkillers, and the sentiment couldn’t be truer here in regard to Roberts and Streep.

While both are queens of the screen, these are two very different actresses. One is among the greatest of America’s chameleonic film artists, and the other is a movie star who seems to have been born to be loved—America’s sweetheart well before she turned a hooker into the girl next door. So Roberts may, admittedly, be at a certain advantage when dropped alongside Streep in this realm of expletive-filled dysfunction. Between Violet and Barbara, the latter proves to be the more compelling character, but what makes Roberts especially vivid here is seeing her out of her element. Streep doesn’t play intoxicated on the regular (the last time she got lifted was when she shared a doobie with Steve Martin’s character in It’s Complicated), but it’s nothing new to see her sling icy vitriol at her co-stars, particularly in the wake of The Iron Lady and The Devil Wears Prada. Yet Roberts is rarely given the chance to play the formidable type. For novelty’s sake alone, it’s much more gratifying to watch the smiley A-lister shout “horse shit!” than it is to see Streep bring her Streepiness to a scene of Percocet-sparked mania. Which is not to say Roberts doesn’t also nail her role. Barbara doubles as an audience reminder that this sweetheart can do the tough stuff, too, on the rare occasion that it’s offered to her.

Of course Streep will be nominated for Best Actress. Like the Weinstein-backed movie itself, which will cruise its way into the Best Picture lineup in a manner similar to that of Les Misérables (another ensemble piece that’s easy to endorse but hard to adore), Streep will fill a predestined slot, earning kudos for a performance that’s fine, but not stellar when measured against her better work. Roberts is the real surprise, and unless voters want to pull a Kate-Winslet-in-The Reader, ignoring campaigns and bumping Roberts to her proper place in the leading race, the actress will surely be among this year’s Supporting Actress crop. More surprising still is who likely won’t be there. Earning early buzz for her role as deeply flawed Aunt Mattie Fae (buzz augmented by a much-deserved career surge), Margo Martindale was long considered an early favorite, while Julianne Nicholson, who plays Barbara’s sister Ivy, was rumored as a show-stealing dark horse. But neither of these claims feel validated by the actresses’ actual work on screen, and with such a crowded flock of actresses in contention in both categories, odds are there will only be room for the legends at the table. If an additional actor were to slip through with a nod, it would be the heartbreaking Chris Cooper, who nails the role of tender, paternal Uncle Charlie, and could be a Supporting Actor finalist, not least because the character’s father-son scenario evokes emotions surrounding Cooper’s own recent loss of a son.

Elsewhere, there’s Letts’s sure-to-be-recognized Adapted Screenplay, but August: Osage County will likely wind up with a minimal final tally of nods. John Wells does an adequate job of keeping this ship afloat, but there’s nothing all that remarkable about his Direction, which, to be frank, should be expected of a Streep film at this point. Cinematographer Adriano Goldman brought astonishing chiaroscuro to 2011’s Jane Eyre update, but it’s hard to think of a noteworthy frame he offers in this movie. And while no ensemble piece should ever be fully counted out of the Film Editing race (let’s hear it for Crash!), this flick would need a whole lotta love for Stephen Mirrione’s cuts to clinch a mention. One could see Academy favorite Gustavo Santaolalla singled out for his Original Score, but if there’s one more craft category that might make room for August, it’s Art Direction, as production designer David Gropman meticulously packed and dressed the Oklahoma home that was purchased specifically for the production. And there’s another point in the film’s favor: Among those footing the bill was Midas-touch co-producer George Clooney.

Shouldn’t be Overlooked: None.