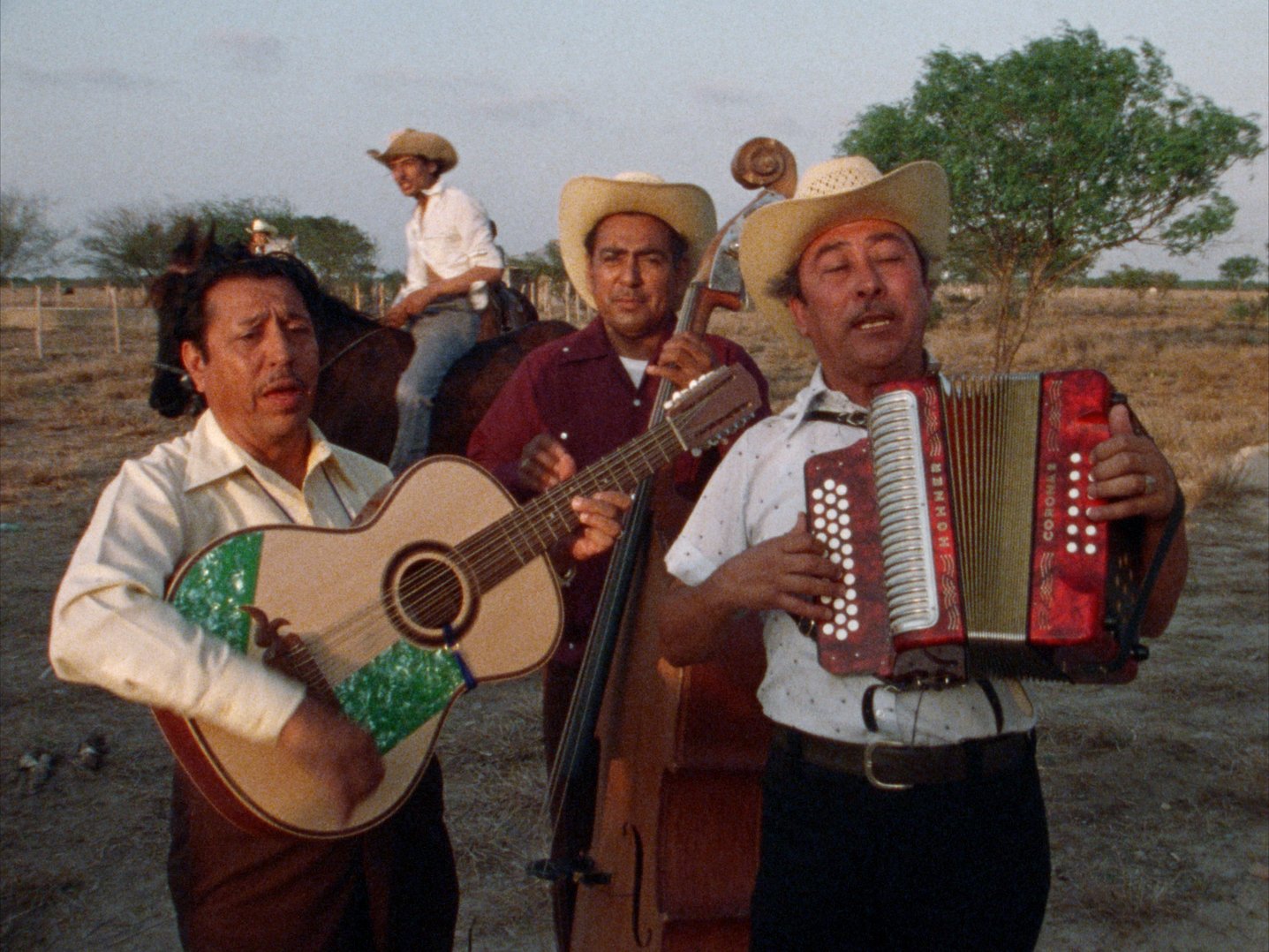 Les Blank, a filmmaker deeply enamored of the sights, smells, and flavors of particular regional subcultures, was devoted to activating the viewer’s senses, and sometimes in unconventional ways. Depending on which one of his films was playing in a theater, you could count on the scent of red beans or garlic to be piped into the room. It was a process that was cheekily called “Aromaround.” But even without such accompaniment, his work remains some of the richest, most palpable sensory experiences ever committed to celluloid—films that welcome viewers into vibrant, authentic cultural spaces and treat them like special guests.

Newly restored in 4K, Blank’s companion films on the norteño music that originated in the Texas-Mexico borderlands, 1976’s hour-long Chulas Fronteras and 1979’s 30-minute Del Mero Corazón, provide typically peppy examples of the director’s immersive, seemingly effortless style. Eschewing explanatory narration or canned talking-head interviews, Blank isn’t all that interested in teaching us about this jaunty, polka-like style of music. Instead, he wants us to experience for ourselves the cultural ferment from which it arises.

Both films play like mixtape travelogues, bouncing around from beer joints to backyard barbecues to a 50th wedding anniversary—anywhere and everywhere that norteño music is played. In Chulas Fronteras, a few interviewees explain their personal career trajectories, and one musician traces the style’s roots in German polka. (It’s essentially the same, he claims, except that Tejanos “give it a different taste.”) Predominately, however, these aren’t films about the development of norteño, but rather works that use the music as a lens through which to view an entire subculture of food, celebration, family, and labor.

If the dominant mood of Chulas Fronteras and Del Mero Corazón is undoubtedly festive—a perfect match for the jubilant accordions and lively vocals that fill their soundtracks—a deeper pain nevertheless courses through these films. Many of the lyrics to the songs we hear touch on difficult subjects, such as labor struggles, personal loss, and racism. Blank brings these issues to the fore in many of the films’ loose-limbed interview segments, which generally catch the subjects while they’re cooking up a big meal or just about to perform a song. In one, a migrant farm worker discusses his life of transience, ceaselessly moving from one area to another, follow the crops. In another, a musician relates an infuriating anecdote about being refused service at a roadside hamburger stand because of his ethnicity.

Blank, though, isn’t one to dwell on such cultural strife, as there’s a different song being sung elsewhere. There are simply too many wondrous sights to take in for Blank to linger on any one subject too long, like the priest blessing cars with holy water or the woman scooping the meat out of a pig’s head to make tamales. Blank’s approach to documentary is immersive and inquisitive, at one point rendering a cockfight, an event that’s potentially off-putting to outsiders, as the authentic divertissement it is for the people of the region.

Of the two films, Chulas Fronteras is the clear standout, offering a deeper cultural immersion. Del Mero Corazón, which Blank co-directed with Guillermo Hernández, Chris Strachwitz, and Maureen Gosling—the last of whom would become Blank’s regular collaborator—is a bit more lyrical, focusing on its subjects’ personal relationship to their music and interspersing poetic quotations from love songs and folk tales throughout its running time. But the similarities between the two films overwhelm their differences. They’re essentially extensions of each other, with Del Mero Corazón moving beyond the Texas-Mexico border to explore a bit of the San Jose norteño scene, particularly singer and accordionist Chavela Ortiz.

More than 40 years after their making, Chulas Fronteras and Del Mero Corazón not only provide a rich portrait of a region and its people, but an amusing time capsule of mid-to-late 1970s tackiness as well. Providing an unvarnished look at kitchen interiors full of ugly wood cabinets and orange laminate countertops and men in checkered polyester pants sucking down cans of Schlitz, these films are also a blast from an ineffably gaudy past.

And yet, at a time when migrants are relentlessly demonized and brutalized, held indefinitely in government detention centers for the crime of crossing a somewhat arbitrary line separating two nations, Chulas Fronteras and Del Mero Corazón offer a timely and incisive reminder of how porous and artificial the U.S.-Mexico border really is. Cultural exchange doesn’t stop at the Rio Grande, a fact of which the people in these films are acutely aware: As the group Los Pingüinos del Norte proudly sings in Chulas Fronteras, “Mexican by ancestry/American by destiny/I am of the golden race/I am Mexican American.”

Review: Avi Nesher’s The Other Story Is Melodramatically Replete with Incident

Review: Though Inspiring, Maiden Doesn’t Evince the Daring of Its Subjects