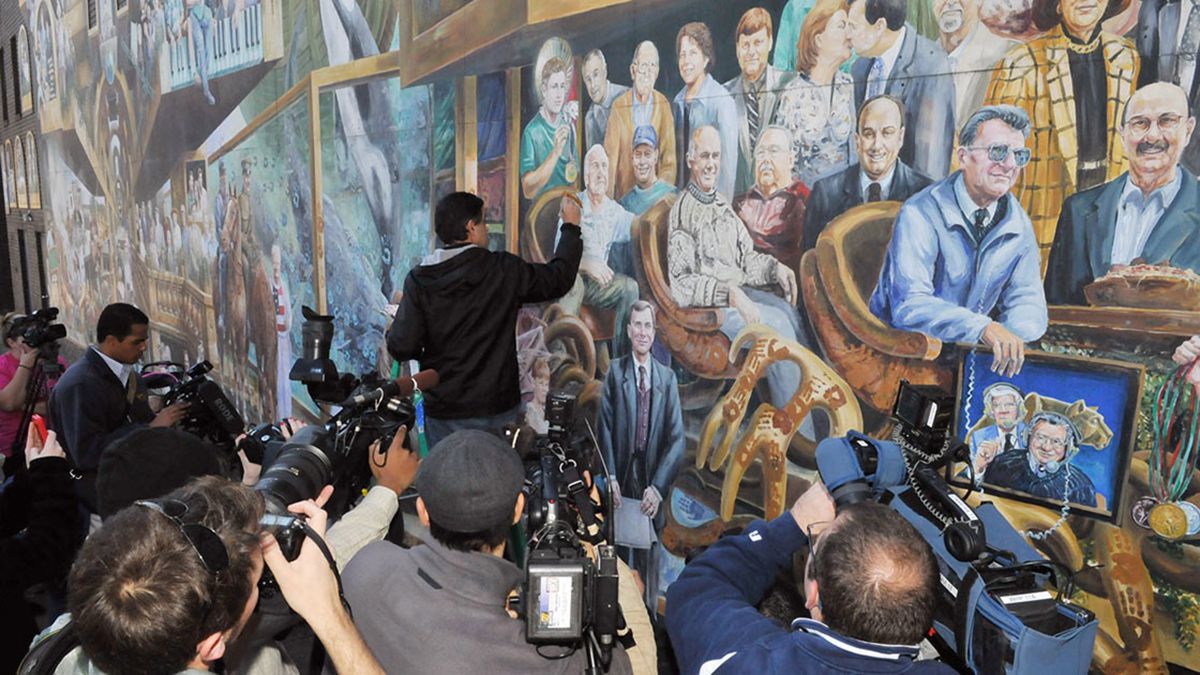 Happy Valley is about two kinds of rituals: the media-packaged public shaming spectacle, and game day for football fans. The two are becoming uncomfortably close bedfellows these days, which lends Amir Bar-Lev’s documentary about Penn State football and the Jerry Sandusky child-abuse scandal both an eerie prescience and some unexpected urgency. The film follows the aftermath of the Sandusky revelations, as more victims go public and the university—in an effort to cleanse itself of any association with the affair—dismisses its president, athletic director, and legendary football coach Joe Paterno, lovingly called “Saint Joe” by students and on T-shirts. In its best moments, Happy Valley scrutinizes the tension that builds when the sanctity of game day is tarnished by the media’s thirst for ignominy and punishment. A fascinating, barely coherent rage erupts when these two rituals are put at odds with one another.

Bar-Lev is keen to display and dismantle the component parts of each phenomenon, revealing the machine of consumerism and spectacle underlying the seeming purity of sports fandom. Happy Valley begins with a game-day montage: the green hills of State College yield to tailgaters, a cashier readying merchandise, and sportscasters hyping the day’s action. The school provides the fans, the fans provide the money, and the money attracts the media. Individual shots of a Penn State undergrad’s dorm room festooned with football paraphernalia, or of two competing news organizations covering an identical story simultaneously, are potent enough to display this machinery in action.

Efficient and gripping when focused on its potent institutional and cultural concerns, Happy Valley is dispiritingly conventional when delivering information about the Sandusky scandal. Talking heads speculate about how aware Paterno was of Sandusky’s actions, and whether he had a moral obligation to report them to the police. The release of the Freeh Report—which compelled the NCAA to vacate 14 years of Penn State victories, among other harsh penalties—is recounted with many still shots of highlighted and bold-faced on-screen text. Local artists and dissenters toward the cult of Paterno have their say. Interviews with Sandusky’s adopted son Matt (a victim of his abuse) and the Paterno family confirm how miserable it is to be a part of a media narrative with its own inexorable momentum. This momentum proves to alter the landscape of Penn State University: not only is Paterno fired, but a statue honoring him is removed from the campus. All other vestiges of his image disappear from university shops and team coverage. It’s these specific actions that transform Happy Valley, a nickname State College earned due to its relative strength during the Great Depression, into a site of rebellion against a university- and media-sanctioned shame spiral.

Bar-Lev is perhaps our preeminent documentarian of public scandal. His last film, The Tillman Story, was a moving attempt to salvage the reputation of a football player turned soldier whose death and persona were mangled by the media and the government. At the center of Happy Valley, Bar-Lev sets himself a more complicated task: to explain the amorphous outrage of a student body. “This is so fake,” one student complains when a scheduled pep rally is made to become a prayer vigil. “Fuck the media,” hordes of them chant to an ESPN crew on the night of Paterno’s resignation, before tipping over a news van. Such footage benefits from Bar-Lev’s combination of empathy and journalistic detachment. What scans like a “culture of reverence” gone wild comes to seem, in subsequent interviews, more like a case of deep resentment toward the media, the NCAA, and their own school. The film thrives in its sustained focus on a group of students punished by one man’s heinous actions, but once the media caravan departs, Happy Valley meanders, torn between its obligation to reportage and its interest in a town riven by America’s thirst for justice.