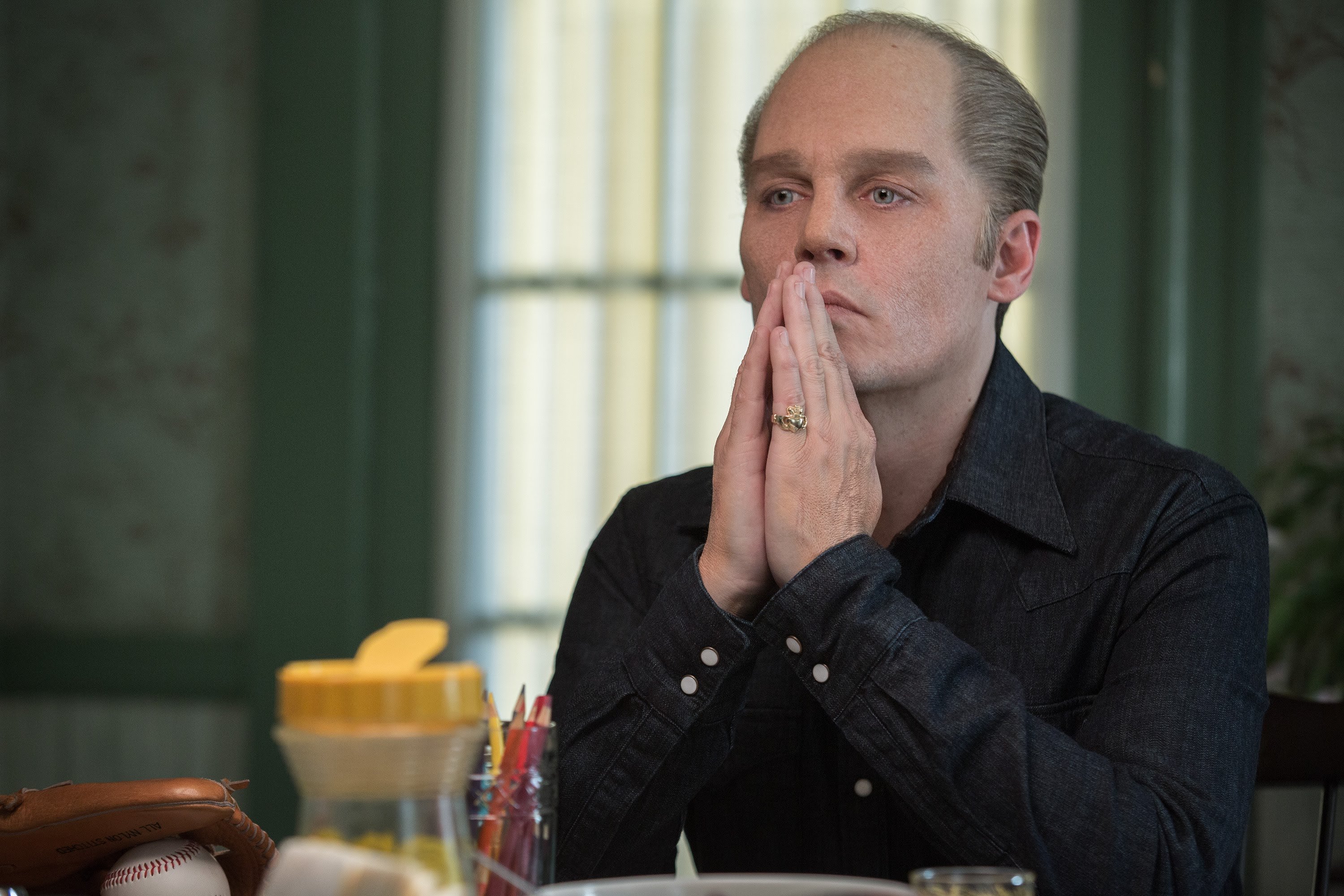 In director Scott Cooper’s Boston, interiors fade into blackness, meetings happen in alleyways, and it always looks like it just stopped raining. It is, all told, an appropriate setting for the dour and dispassionate Black Mass, a lightly dramatized case file that’s structurally averse to world-building and psychological portraiture. The film, which plays like a barrage of bullet points punctuated by a smattering of bullets, takes a dutiful approach to the evidence against James “Whitey” Bulger (Johnny Depp), the head of South Boston’s Winter Hill Gang, and John Connolly (Joel Edgerton), the F.B.I. agent who coaxed Bulger into becoming an informant while abetting the criminal’s rise to regional kingpin status. Though the film succeeds in conveying the “unholy alliance” between two cocksure Southie brethren, it fails to make much sense of the richly detailed, ethnically charged world they inhabited.

Black Mass is deeply invested in the mythology of the Bulger case, but doesn’t bother to explain much of it. The film will teach casual viewers that Bulger made money by running drugs and guns and laundering money, but the nuts and bolts of his criminal empire are left to the imagination, perhaps because some of them are profoundly uncinematic. (There are repeated references to a turf war over vending machines, along with a stretch devoted to Bulger’s relationship with the owner of World Jai Alai. None lead to a good joke.) A few shots of money-counting machines constitute the glory of Whitey’s operation, and a handful of solid actors (Jesse Plemons, Rory Cochrane, W. Earl Brown, Peter Sarsgaard) appear as partners and associates, but Whitey’s network of thugs feels as sparsely populated as Black Mass’s city streets.

Like any crime saga without a more potent thematic hook, the film’s relentlessly insular script, by Jez Butterworth and Mark Mallouk, dwells on themes of loyalty and fraternity. Every conversation between Bulger and Connolly hinges explicitly on their shared heritage (hostility toward Italian-Americans is a running theme without a payoff), and Bulger’s power plays lay a moral burden on the government agent tasked to expose Bulger and act against his own community. As Connolly, Edgerton nails the unique hypersensitivity of Boston bravado, strutting around in tailored suits and meekly attempting to weasel out of every half-truth he’s caught peddling. Black Mass’s shrewdest decision is to contrast Edgerton’s antsy approach to Connolly’s double life with Depp’s tempered, clinical take on Bulger. Connolly’s lies become a misguided attempt to achieve greatness, while Bulger’s are purely transactional in nature.

The two form an interesting partnership, but Black Mass’s journalistic tenor doesn’t allow their relationship to achieve any sort of emotional grandeur. Connolly is a layered protagonist undergoing a spiritual crisis worthy of the Scorsese treatment, while Bulger is a taciturn antihero who, like Michael Mann’s men of action, only seems to speak in the imperative. Cooper takes half-measures to honor both directors with, respectively, ear-blasting executions and a token nightclub scene, but the vast majority of Black Mass plays out with the numbing rhythm and flat imagery of the procedural. A fitful framing device features interrogation scenes of Bulger’s former associates ratting him out, while ushering in tales of various moments of the mobster’s 1970s-to-‘80s heyday. Otherwise, the film flits between its cops and robbers without any perspective to share, or argument to pursue, other than that breaking the law is grim business, but it sucks even more to get caught doing it.

Black Mass’s few jolts of pleasure are largely relegated to a few bits of stunt casting which, like the entirety of Cooper’s film, seem designed to please old New England newshounds and politicos: Benedict Cumberbatch, eager to impress with an intriguingly reedy accent, portrays Whitey’s politician brother, Billy; Adam Scott, wildly miscast as an F.B.I. agent, spends most of his scenes standing in the back of rooms, waiting to deliver a single line. Despite the film’s parade of famous faces and competing accents, there’s a natural chumminess to the confusing network of policemen, politicians, and journalists that orbits around Connolly. That camaraderie is weirdly absent among the thinly sketched array of figures surrounding Bulger. Black Mass is under no obligation to make the criminal lifestyle glamorous or seductive, but the film’s Wikified approach to the Bulger saga renders the character’s actions and motivations impenetrable. Even a culture that thrills to its antiheroes will struggle to connect with this one.