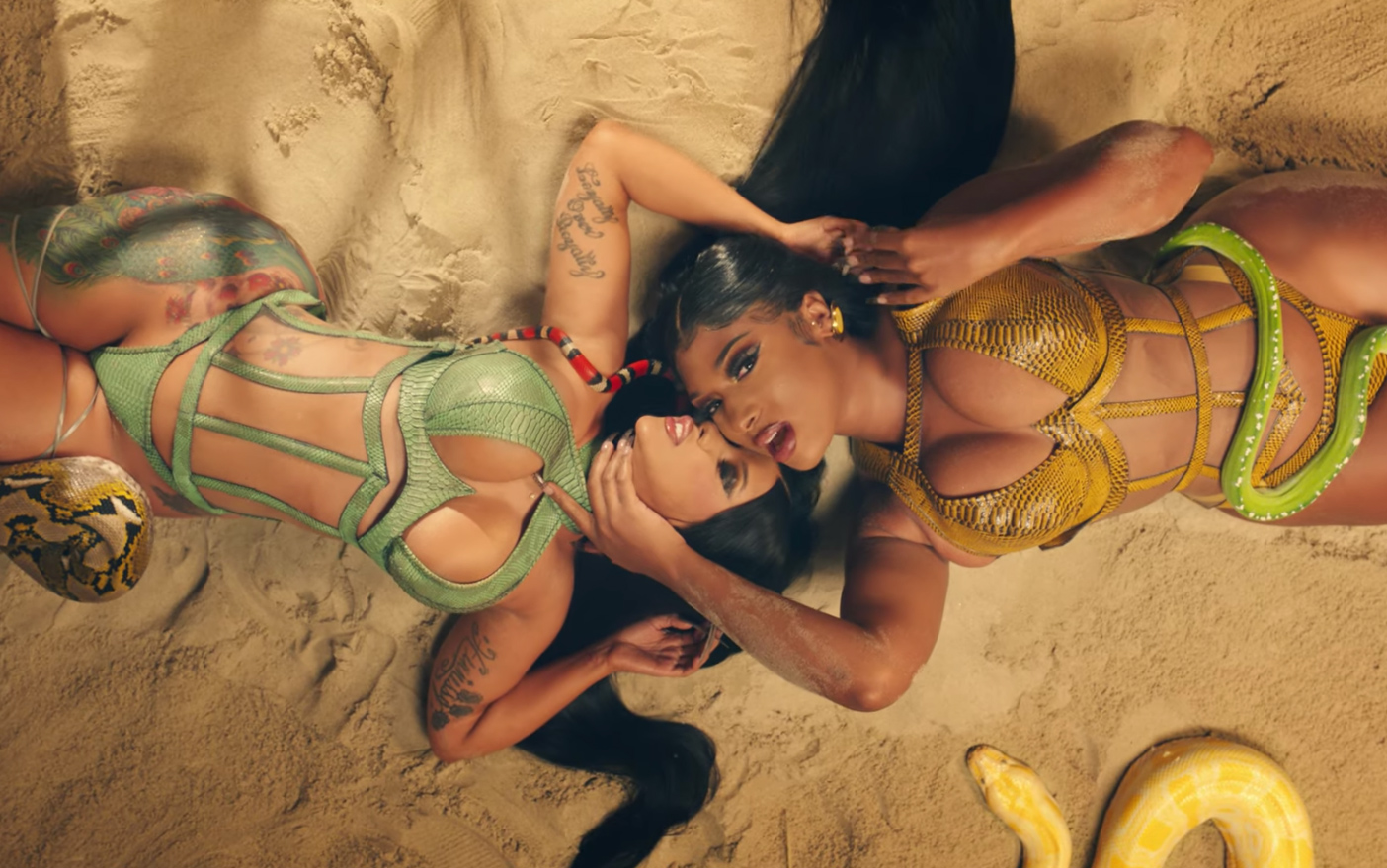 A sharp pivot from the ornate, pastel-toned floral set pieces of his “Slip Away” video, Mike Hadreas’s self-directed “On the Floor” clip is rugged and unadorned, relying primarily on Tate Justas’s writhing, restless choreography and Hadreas’s no-holds-barred dance performance to match the song’s catharsis. The singer trades a ruffled pink suit and matching gloves for a stained tank top, rolling around between a stack of tires and a boulder wrapped in chains. The video ends with an exhausted Hadreas lying alone on the ground, clumps of dirt clinging to his back as he smiles at the camera. It’s a moment that captures the video’s redemptive ethos, mirroring the audience’s gratification in watching someone let it all loose through music. Mason

Bookended by amusing scenes of Bebe Rexha, Doja Cat, and their extravagantly dressed squad at a Chinese restaurant, the campy “Baby I’m Jealous” finds Bebe lamenting love in the time of social media and naïvely romanticizing bygone eras. Whisked away by a magical fortune cookie forced upon her by the restaurant’s persistent hostess, she quickly discovers that the past is filled with oppressive corsets, cheating cavemen, and literal snakes. The video’s unabashed silliness is made all the more charming by its liberal use of very obvious green-screen. Camp

The Rosalía Cinematic Universe, developed with frequent collaborator CANADA, is meticulously detailed and populated by an array of symbolic objects. In the video for “TKN,” those include a giant red velvet donut slowly ripped apart and devoured by children, a dead bird that falls from the sky and cracks the pavement around it, and a “There’s No Place Like Home” cross-stitch that bounces with the song’s thumping beat. Together, they expand beautifully on the maternal dynamic between Rosalía and a swarm of children who dance around her, tackle her, and play with her hair, by turns performing public unrest and familial comfort. Mason

Whereas some music videos can feel unrelated to their sound and lyrical content, the clip for Rina Sawayama’s R&B/nü-metal fusion “XS” correlates perfectly with its frenzied, post-ironic depiction of consumer culture. Over sounds of sportscar engines revving, the unidentified contents of Sawayama’s fictional brand of water swirl in a shimmering gold cloud before she takes the stage in a faux infomercial. As expected, even the least extravagant portions of the video are cartoonish and hyperkinetic, with multicolored makeup, hammy acting, and TikTok-ready choreography. At some point, it goes beautifully awry, with a revelation that RINA Water is—shocker—produced inhumanely. The over-the-top video is a model of how conscious pop can be both riotously fun and critical. Mason

Sufjan Stevens’s lyrics on “Sugar” consist mostly of vague gestures toward oppression—“Don’t drink the poison or they’ll defeat us”—but this is by design. The song proposes love as an escape from America’s ills, so the lyrics themselves tend to avoid mood-killing specifics. In the song’s video, a nuclear family dances around their cozy home, surrounded by cherry pies, toy trains, and glass flower vases, items that would not be out of place in a 1950s homemaking magazine. Eventually, the yellow wallpaper begins to peel, and it becomes apparent that this stifling, dimly lit house is a façade, a cage, with the video’s narrow aspect ratio heightening the sense of restriction. As the kitchen catches fire and cracks appear in the walls, the family thrashes and breaks their possessions until the house collapses around them. Finally, they’re left in an open field, walking into the distance with nothing left to confine them. Mason

Harry Styles’s “Watermelon Sugar” may have garnered all of the headlines, but “Adore You” is a charming, admittedly absurdist visual that puts a unique twist on the fish-out-of-water yarn. Directed by Dave Meyers, the video finds the former One Direction member pouring his heart and soul into saving a rapidly growing, and increasingly traumatized, fish—eventually affirming the age-old lesson that if you love something, let it go. Cinquemani

The music video for “Cut Me” opens with Moses Sumney riding in the back of an ambulance, fogging up an oxygen mask as he sings, before cutting to scenes of the artist gaining strength and inspiration. He dances and hobbles around a stage wearing a black dress cut like a medical gown; he performs a choreographed pattern of lying down, sitting up, and lying back down in a hospital bed wrapped in climbing ivy; he poses on a casket, calm and modelesque. Just as the song itself is spacious with occasional baroque flourishes, the clip’s visuals are stark but livened up by Sumney’s personality and by bursts of saturated reds and greens. By the end of the video, he’s reinvigorated, standing on the roof of the ambulance, black cape billowing behind him, reins in hand like a desperado resisting despair. Mason

Shot in Belgrade aboard former Yugoslavian dictator Josip Broz Tito’s infamous Blue Train, the celebratory video for Jessie Ware’s “Spotlight” captures a kaleidoscope of emotions as the singers walks, struts, floats, and dances among the train’s passengers. The mesmerizing clip was directed by Serbian filmmaker Jovan Todorovic, who turns the Art Deco locomotive into a bustling discotheque that serves as the perfect backdrop for Ware’s blissed-out reverie. Cinquemani

The dizzying video for the Weeknd’s “Blinding Lights” pulls out all the viral-clip stops: an exhilarating running sequence, a slowed-down hallucinatory interlude, luxury cars, bloody makeup effects, a giddy Abel Tesfaye dancing like no one’s watching—enough bells and whistles for the entire Top 40 but rendered with cinematic elegance by director Anton Tammi. The clip’s story progresses as if Tesfaye’s blustering persona in Uncut Gems inherited the anarchic sensibilities of Joaquin Phoenix’s Joker, with the singer on a reckless rampage through Las Vegas. While not quite as provocative as his video for “Too Late,” “Blinding Lights” is a menacing, indulgent romp that delivers an intoxicating dose of wish fulfillment. Mason

The video for “Dora” is a precise summation of Tierra Whack’s vision, a brilliant collision of whimsical imagery and adult themes. Much in the vein of the viral “Don’t Hug Me I’m Scared” web series, Whack and director Alex Da Corte pay tribute to the enduring positivity of Fred Rogers and Jim Henson, deepening the colorful aesthetics of children’s media with a sense that something is off. In one scene, a dense, squirming horde of Muppets surrounds an uncanny 3D rendering of Whack, gold grille in place, boasting about her expensive habits. In another, she sprouts neon pink horse legs, her digital form unnervingly twisting back and forth as she expands her lavish wish list. This constant tension between superficial happiness and underlying trouble has made her distinguished videography enchanting since 2017’s eerie, Grammy-nominated “Mumbo Jumbo” clip, building Whack World into a multifaceted, vibrant emotional landscape. Mason

All 23 Pixar Movies, Including Soul, Ranked from Worst to Best