Lucrecia Martel’s films are surgically precise eviscerations. Their targets are often Argentina’s largely white middle class, their characters the most ill-minded among a nation’s most physically comfortable. They’ve included the rabid, lustily alcoholic family of La Ciénaga, a perverted doctor and the girl who may or may not be pursuing him in The Holy Girl, and a dentist who—again—may or may not have committed a hit and run on an Amerindian child in The Headless Woman. And in some way or another, these films demand that we situate ourselves within the shifting mental terrain of the characters.

Martel’s latest, Zama, is a film about failure. It opens on Don Diego de Zama (played by Daniel Giménez Cacho), a functionary of the colonial Spanish Empire who’s stationed in remote Paraguay during the late 18th century, casting his romantic hero’s gaze over a flowing river, almost as if it were his domain. Stuck in this backwater outpost, Zama will repeatedly try to get himself transferred to Lerma, the capital of Argentina’s Salta region—Martel’s home province and the setting of her previous three films—only to be thwarted by every machination of the Spanish Empire’s bureaucracy.

Adapted from the 1956 novel by Antonio di Benedetto, Zama is a sensuous, decidedly absurdist, and at times otherworldly reshuffling of the vaunted delicacies of the period piece. And earlier this week, at the Film Society of Lincoln Center, I met with Martel to discuss her anti-mythological inquiry into Argentina’s dark colonial past, her shift to shooting on digital, the particulars of the film’s sound design, and ceding power to her actors.

How did you first approach adapting Zama?

It’s pretty difficult to remember, technically, how it was for me. But I can tell you that it was hard to separate what I was creating with what’s in the novel, because the novel hit me profoundly. There’s something in the novel that’s not in the film, but which perfectly explains a feeling, an indispensable mechanism for making a film based on this book. Di Benedetto tells a story about a dream he had about a hand, and it made him think about many women that he had loved in the past—so, basically, a metonymic process that triggers the act of creation, which is something that unites many authors.

That’s interesting because much of the film is based around disembodied parts of different people. I’m thinking of the governor wearing Vicuña’s ears.

One thing I did with the framing of the hands was to thread a whole road as a type of emotional or mental extension. In Vicuña’s case, governments or governors need somebody to embody evilness and need proof that they’re combatting evilness or a relic to prove that they’re winning over this evil.

It’s like that line in the film, which I can’t remember precisely, but “I hate men for their desire to possess everything.”

This is your first feature on digital, no?

What motivated you to shoot on digital?

There weren’t the technical conditions for shooting on film in Argentina. And frankly, I don’t really care about it. I don’t spend more than two minutes thinking about that conflict. I don’t have nostalgia for it. I do recognize the beauty of film, but I don’t have much attachment to it.

Daniel Giménez Cacho plays a character that Samuel Beckett could have written. It’s almost like this man doesn’t realize that the joke is on him. I was wondering how you worked with Giménez Cacho on that or how you were able to push him to that sort of performance.

He’s an incredible and potent actor, and I was fortunate to work with him at a moment in which he wanted to challenge himself a lot. His character is difficult because he’s not a person who has a lot of text or many actions. That challenge was very attractive to Giménez Cacho. I remember the day where we were shooting the scene with all the Indians painted red. It was a mess, with all the painted people all around and him lying down naked against a wall in the midst of the cameras and all the lights and cables. It was so cold. He was like a faqir, or a saint, almost like he was in a trance state. It was incredible.

All by himself, or with your direction?

No, no, no. The only thing I want is to follow the actor’s process. Every actor has his or her form. So what I do is combine myself with that.

What is a faqir?

It’s a discipline of Hindu meditation. You sometimes sleep on beds of nails or walk on coals.

The character of Zama very clearly strikes me as an allegorical figure. He seems to be standing in for, if not Argentina, then at least its ruling class. Do you feel that Argentina is waiting for its own transfer to Lerma?

I think that there’s an enormous part of the petite bourgeoisie that’s hoping they can be transferred to another place, maybe Miami. [laughs]

Why Miami? Do Argentinians love Miami?

No, I say Miami because I wanted to say a place that is a palace of consumption. It seems to me that that’s a place that the upper middle class of Argentina can go and spend all their time thinking about their desires.

I’ve often read that you tackle the sound design before the images. Was there an overriding concept for Zama? It’s incredibly complex.

The general idea before making the film was to create the sound design, with natural elements, but avoiding the typical classical music of the past, or the sounds of birds, carriages, or bells—all of these sounds that one associates with period films and make you feel like you’re in well-known terrain.

The sound design really brought my attention to the edges of the frame. It produced a really interesting conflict between the sound and the image, which is something that I find in a lot of your films.

In general, in all my films the sound concept is the same. It’s to generate a soundtrack that allows one to transcend the referential power of images, that lets you see beyond, that lets you doubt this or that, for the soundtrack not to affirm the image in an automatic manner.

The things we hear in the film struck me as those things which Zama wouldn’t be hearing, like those background noises, such as the creak of the fan that the slave used. Those are the sort of perceptual things that would be noise to him because it would be a part of his environment.

Yes. In general it’s about the spectator perceiving something that obligates their attention to something else over the image. It relates to Zama’s perception but not completely.

The film was also rich in dialects of Spanish that were spoken at the time. There were at least four or five different types of accents that I picked up.

In reality, the colony is much more complicated than what is seen in the film, but for me it was important to try and transmit at least a little bit of that complexity with language because what happened in America was very, very complex. There were a lot of languages, four.

Yes. You don’t realize, it’s not so easy, but there are four.

Incredible. It’s similar to the United States’s history. We came in and destroyed a wide variety of languages.

The compositions in the film seem extremely consistent, with that recurring shallow focus shot of Zama’s face with a servant in the background, but bustling and complex. Did you have a particular process for framing these shots? Or was there something you had in mind while developing this style?

What I did in this film that was different was to include a lot of jump cuts. But the framing decision was always something that happened in the moment. I framed the shots. That’s not something I delegated to the cinematographer. And it always happened on set, because I can’t predesign that.

Rui Poças previously shot Miguel Gomes’s Tabu. Did you seek him out because of his experience on another film that’s about colonialism?

He was a friend of the producer, and she proposed him to me. Truthfully, he was a delightful man and when we started talking, his association with Tabu stopped being useful. As soon as we started to chat, we got along very well.

Your other films revolve around the legacy of colonialism, so I was wondering how you viewed this film with respect to the other films you’ve made. How it matches up with your “Salta trilogy.”

You know, there are some things that deceivingly put Zama in another place, but I don’t see it as very different from the others.

So the shift in time period and subject doesn’t seem significant for you?

No. It was like thinking about making a sci-fi film.

A lot of the film revolves around power that comes from imaginary sources: Zama’s military exploits, which you never see; the “coconuts” made of stone; even the Spanish crown is something people invoke for power. It’s similar to The Headless Woman. Is this a thematic you’ve been trying to follow?

For me too. Yes, it’s very close to the The Headless Woman. For example, in the idea of this subjective point of view that’s closer to the character, but the people surrounding the character know more than them in their exchanging information and the character is always arriving late. 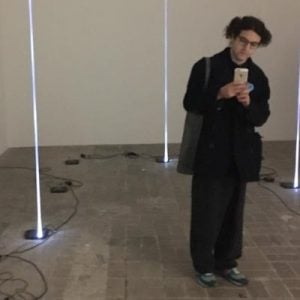