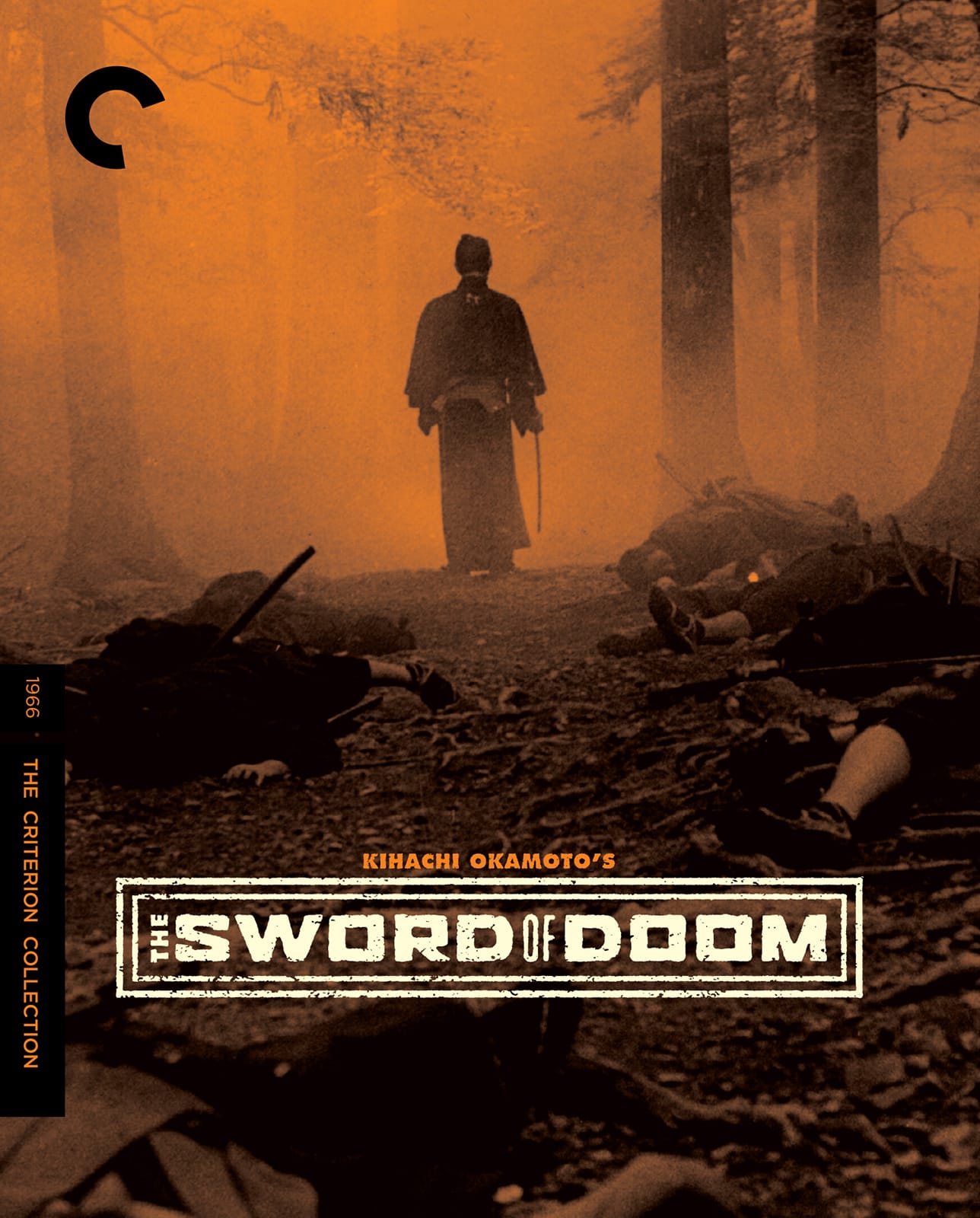 Kihachi Okamoto’s awesomely titled The Sword of Doom concludes mid-slash, as the homicidal samurai Ryunosuke Tsukue (Tatsuya Nakadai) is trapped in a final freeze-frame while hacking his way through an army of blade-wielding assassins and the taunting specters of those he’s formerly slain. Such an abrupt ending was intended to hint at forthcoming sequels—the film, based on Kaizan Nakazato’s 1913 serialized novel, appeared in newspapers for more than three decades, and was never technically completed—yet such sudden termination winds up perfectly complementing the film’s portrait of unstoppable evil. Its narrative a series of loosely connected chronological vignettes set in 1860s Japan during the end of the Shogunate era, Okamoto’s story is fixated on Ryunosuke, a vicious samurai who begins the film by slaying an old man (“It’s all downhill from here,” the elderly gent had portentously told his granddaughter about the mountainous road they’d been traversing) and ends the film as some sort of berserk demon determined to gain access to Hell through historic murderousness. As personified by Nakadai with a mixture of deadly calm (his unique fighting style is one in which his body goes slack before striking his ongoing victims) and devilish unpredictability (his tiny smile and wide-eyed gaze laced with madness), Ryunosuke is an antihero in the tradition of Clint Eastwood’s Man with No Name, and Okamoto juxtaposes his malice with Toshirô Mifune’s stout (and thus less interesting) samurai teacher Shimada. Such contrasts, however, prove superficial, as the film makes no effort to compensate for (or justify) its fascination with immorality; on the contrary, the director seems to take perverse pleasure in depicting Ryunosuke’s ruining of Hama (the disgraced wife of enemy Bunnojo Utsuki, and mother of Ryunosuke’s child) and fanatical desire to crush Bunnojo’s vengeance-craving brother Hyoma. Though Ryunosuke’s despicableness is occasionally offset by his aloofness from the conflicts he finds himself embroiled in, Okamoto’s film nonetheless stands as a gripping depiction of wickedness run amok. “The sword is the soul…Evil mind, evil sword,” Shimada tells the heinous Ryunosuke, and his statement is the thesis for Okamoto’s examination of the way in which action defines character (and vice versa). Shot with an inventive mixture of tension-laced tranquility and swift, unrelenting exactitude that mirrors Ryunosuke’s swordfighting technique, the film is a spectacle of symbiotic movement and sound in which the director creates subtle interplay between his delicate camera pans, atmospheric silence, and lacerating editing. And especially during its two centerpieces—one involving Ryunosuke’s stand-off with a samurai furious that Ryunosuke has bedded his wife, the other the film’s climactic bloodbath—The Sword of Doom proves itself a film defined by its meticulously precise construction.

The Sword of Doom’s black-and-white anamorphic widescreen transfer is gorgeous, with great contrast, minimal traces of debris, and only very minor film grain. The mono soundtrack is a typical mono soundtrack: limited range, a bit tinny, rather ordinary. All in all, another fine job by the always-sterling Criterion Collection.

Nothing. Unless you count the insert booklet’s very good essay by critic Geoffrey O’Brien.

The first rule of Shogunate Japan is, “Don’t mess with The Sword of Doom.”