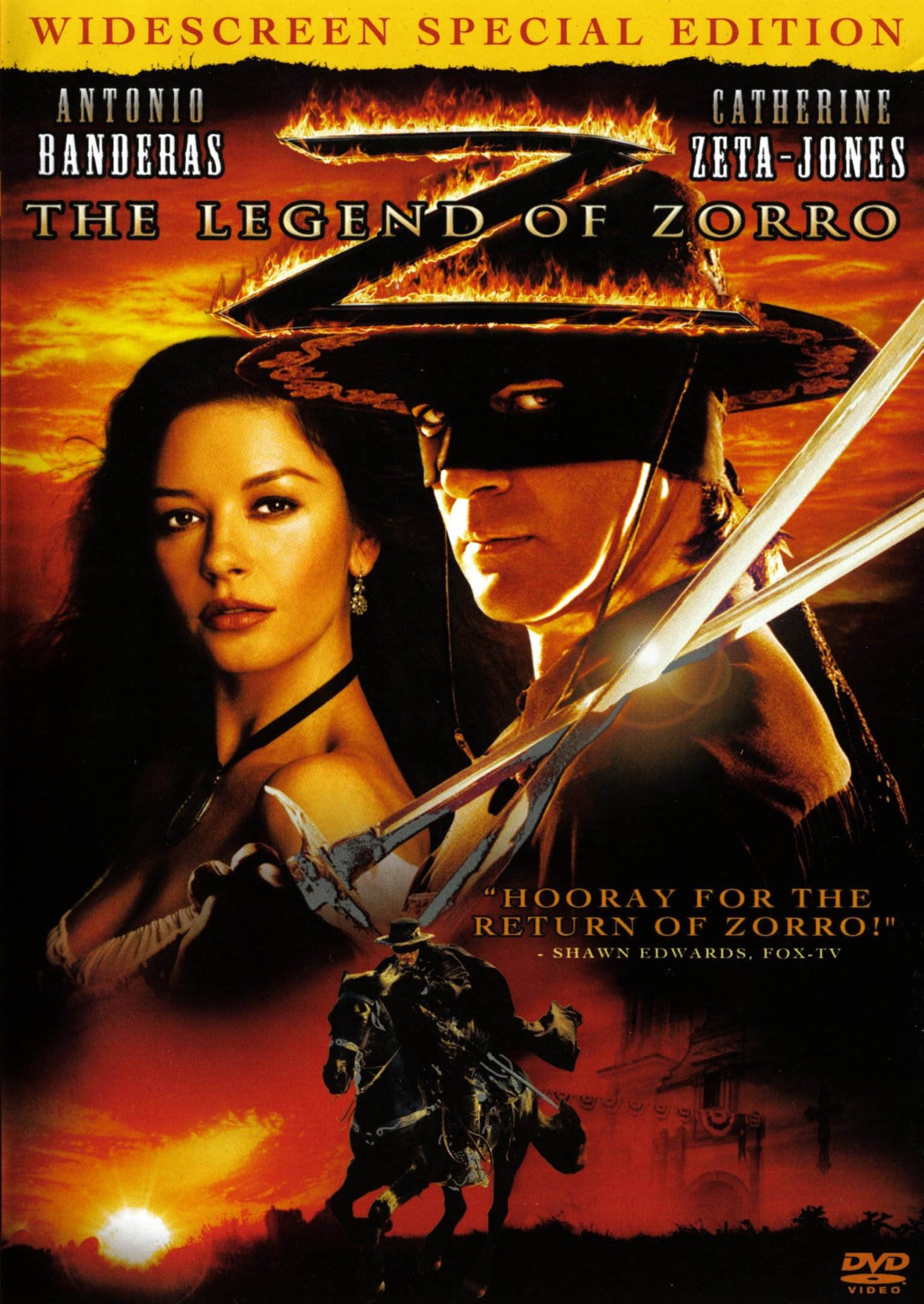 Stitched together from a variety of disparate elements, The Legend of Zorro is a frustrating hodgepodge of a movie, as fascinating (often profoundly touching) in its parts as it is off-putting as a whole. Then again, it never particularly feels like a whole work. It’s a film by committee in which each member is off in his or her own headspace carefully crafting an artisanal piece of a maddeningly unsolvable puzzle. Yet much like its expertly filmed and choreographed swordfight sequences (the director, Martin Campbell, being an unsung craftsman of the form) The Legend of Zorro gains interest from the clash n’ clang of its many contradictory components. It’s one of the more politically muddled movies in recent memory, in several scenes succumbing to a cynical rah-rah pseudo-patriotism that is nonetheless offset by glimmers of cutting satire (especially when it takes the 2001 vintage “Freedom Fries” insult to an appropriately absurd extreme).

Set against the backdrop of California’s impending induction into the United States of America in 1850, Legend of Zorro opens none-too-subtly, all-too-allegorically, nonetheless hilariously with an extended action sequence in which Don Alejandro de la Vega, alias Zorro (Antonio Banderas) retrieves a ballot box stolen by the racist bounty hunter Jacob McGivens (Nick Chinlund), whose right cheek (or better, right wing) is tellingly branded with a cross. It’s just one obvious dialectical opposition in a film filled with them. The ones that hit, like Zorro’s secrets-laden relationship with his 10-year-old child Joaquin (Adrian Alonso), insightfully illustrate the eternal connection between fathers and sons, engaged in a simultaneous biological and emotional battle that here reaches its subversive apotheosis when Zorro insists the boy only speak to him in Spanish, “the language of our fathers.”

The film likewise confronts and critiques the typically patriarchal slant of the Hollywood action genre in a church-set scene where Zorro—distraught after the murder of a friend—interrogates and prays before a statue of the Madonna. The holy Virgin’s overpowering femininity is brought to life via the presence of Catherine Zeta-Jones as Zorro’s love Elena. Blessed with an old-time movie star entrance (gracefully descending a stairway into an illuminative close-up), she radiates a concurrent sense of hallowed supplication and come-hither sensuality that belies her recent roles in Steven Soderbergh’s Traffic and Ocean’s Twelve. Indeed, based on this and the previous Zorro film I’d proffer that only Campbell and his cameraman Phil Meheux have ever photographed Zeta-Jones to maximum effect. In the Soderbergh films the actress looked pasty and unappealing (perhaps an unfortunate extension of that once-great director’s continually devolving pseudo-realist aesthetic), though critic Charles Taylor rightly called attention to the rancid Ocean sequel’s superb final freeze-frame—capturing Zeta-Jones in mid-laugh—as a key to her appeal.

The great movie stars decry and derail any attempts by filmmakers to normalize them; it is their very ethereality, their otherworldliness that attracts and hypnotizes us into a kind of sacrosanct contemplation of their every move. Zeta-Jones has the power to turn even the most glossy romance-novel visualization into something soulfully breathtaking (Legend of Zorro shows that she can toss a carrier pigeon with the best of them), and she’s matched point-for-point by Banderas, whose ingratiating naïveté, melded with a subtle, though smoldering sexuality, helps smooth over some of the film’s rougher patches. Thus is a rather discomfiting running gag involving young Joaquin’s preference for attacking his enemies with a slingshot pebble to the ass (a jest later taken to a homophobic extreme when a villainous henchmen gets a red-hot poker cartoonishly stuffed inside his straight-boy out-hole) uproariously defused when the son, unaware of Zorro’s true identity, breaks his father out of jail and witnesses him fight for the first time. “Where did you learn to do that, Dad?” he asks with appropriately Spielbergian awe, to which Banderas, drawing on his queer-boy experiences with Almodóvar and De Palma, deliciously quips, “Son, prison changes a man.”

This widescreen edition of The Legend of Zorro boasts a relatively flawless transfer. Colors are a bit more muted than I remember from the theatrical incarnation (Catherine Zeta-Jones’s old-time movie star entrance had more of a Technicolor glow on film), but there’s fortunately no pixilation or edge enhancement to speak of. Two soundtrack choices are offered, both heavy on the bass and surrounds: either English Dolby 5.1 or French Dolby 2.0. Optional English and French subtitles are also included.

Director Martin Campbell and cinematographer Phil Meheux provide an engaging feature-length audio commentary with nary a dead spot. Both soft-spoken Brits, they nonetheless have a dry and cutting sense of humor when it comes to critics of the film (especially in regards to Rufus Sewell’s much maligned, though-according to the onset dialect coach-entirely accurate French accent). Four featurettes (“Stunts,” “Playing With Trains,” “Armand’s Party,” and “Visual Effects”) take us through specific points of the production. Also included are four deleted scenes, all with optional director’s commentary, and two multi-angle sequences that compare and contrast behind-the-scenes footage with finished scenes. The disc rounds out with previews for new and upcoming releases, among them Memoirs of a Geisha and The Pink Panther.

Memory Review: Liam Neeson Gets a VOD-Grade Memento to Call His Own